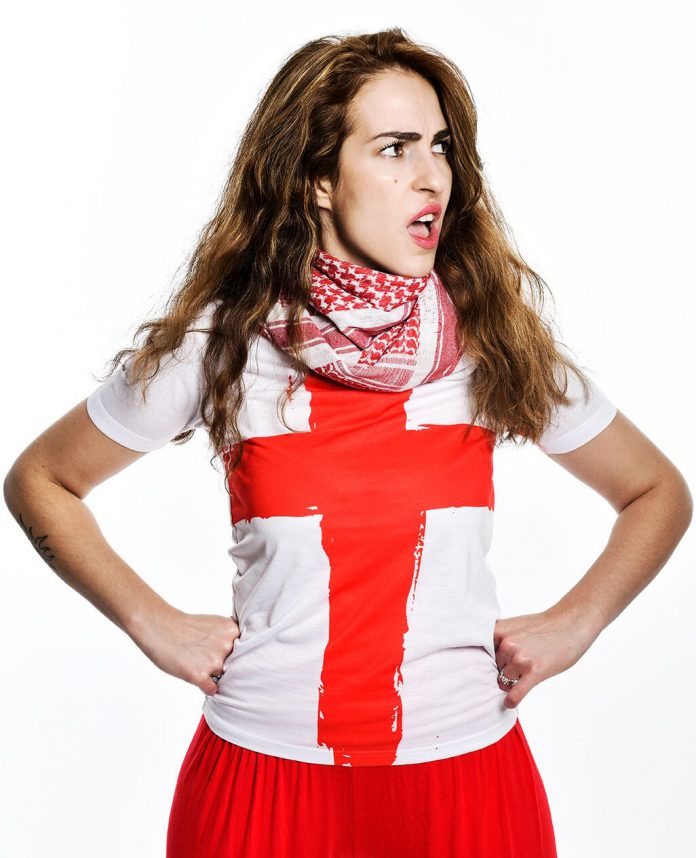 My dad: He is hands down hilarious. I think his accent and the fact that he is this little round Lebanese man makes people assume he is cute. However, he is so dry and you don’t expect what comes out of his mouth. I grew up loving seeing the outside world’s reaction to my dad.

Gina Yashere: I love everything about her. I related to her descriptions of life between two cultures and her mum sounds so similar to my dad. A total G who keeps you in your place. I think her stage presence is pretty epic as well. I love all women who have zero apology for being vocal. Gina is an inspiration and a true role model.

Kids: Everything about kids is ridiculous. I think motherhood and the scenarios you end up in are brilliant material. I mean what comes out of the mouth of babies will give you endless jokes. It doesn’t matter where you are in the world or what your culture, religion or age is, all mums will relate to their kids driving them nuts. A female audience member once disagreed with me, but after I listed things that make kids challenging she was in full agreement. Real observations bond you and the audience.

My heritage: My mum came from a working class council estate in Gateshead and my dad came from a wealthy Muslim family in Lebanon. Their worlds could not have been more different or harder to mix. My mum is very proud of being a working class Geordie and my dad has never accepted that he lives in England. He still thinks he is in 1970’s Lebanon. The difference between my home life and everyone else’s growing up has given me a lot of comedy material. I was the only one at my school whose dad would answer the door in a gelebah, yelling about the importance of lemons. I mean we gave the local racists a lot of material to throw back at us.

Unexpected situations: I once turned up at a gig and the patrons of the pub were handing out free Tommy Robinson leaflets. They were definitely very much pro Tommy. They did not come across as the types that would be the most receptive to an Arab woman getting up and telling jokes, and I was pretty much right. But a few at the back chuckled at a joke, which showed me humour can break boundaries. We are living in times where identity politics divides people so much. Humour is a great way to challenge that.

Body hair: I once was reviewed, ‘Esther jokes about the stereotypes of body hair’. Yup. No stereotype, very much a reality. Every single Asian, Arab, African, Mediterranean woman has a lifelong battle with body hair. Women have so much pressure on them to be hairless. Do you know how much work that is for us hairy girls? How much money, stress and effort? It’s unpaid labour. I remember an English friend once said ‘just bleach it’. Do you know how stupid a brown person looks with a blonde moustache and sideburns? I looked like the Mediterranean Starsky & Hutch. So, yes I’m not hiding body hair shame, but taking a stand. It’s time for Janhairuary to be a year-long event.

My husband: I love him and he is such a wonderful man. He is the most stoic English man I have ever met. The mix of my very English, polite and imperturbable husband with my hot-headed, passionate and fervid Lebanese family has given me so much material and provided so much joy. We were in Lebanon and while looking at a missile he asked, ‘Is this a statue to symbolise the war?’ My cousin replied, ‘No, it’s a missile?’ He ran, jumped into my cousin’s car and sat Googling, ‘Where is safe in Lebanon’.

Ahmed Ahmed: The American Egyptian comedian was the first comic that spoke about the clash between his Arab family and western environment. It was so relatable. I remember his joke about his mother always being suspicious of the neighbours and saying, ‘He looks like he has a lot of bones in the cupboard’ (skeletons in the closet) and that confusion of English idioms is so true of immigrant parents. My dad will always accuse us of making him the ‘escaped goat’.

Politics: I’m a left-wing person. I think in the current climate there is a lot of material regarding politics. It is pure political fodder and, as a typical old school feminist, these boys in charge provide so much comedy value. Boris Johnson has scorned single mothers, yet doesn’t know how many kids he has. Comedy gold. Or Theresa May who wanted to announce we were going to put an end to terrorism, but instead announced ‘lets put an end
to tourism’.

Feminism: I love a good old rant. I will rant about gender politics and will always put it first. Whether it’s domestic politics, religious politics, global politics, I look at everything from a feminist view. While many people out there still think feminism is a dirty word, many, regardless of age, gender, religion or background, can relate to a knackered mum, who sees how the world doesn’t always deal women a fair hand.