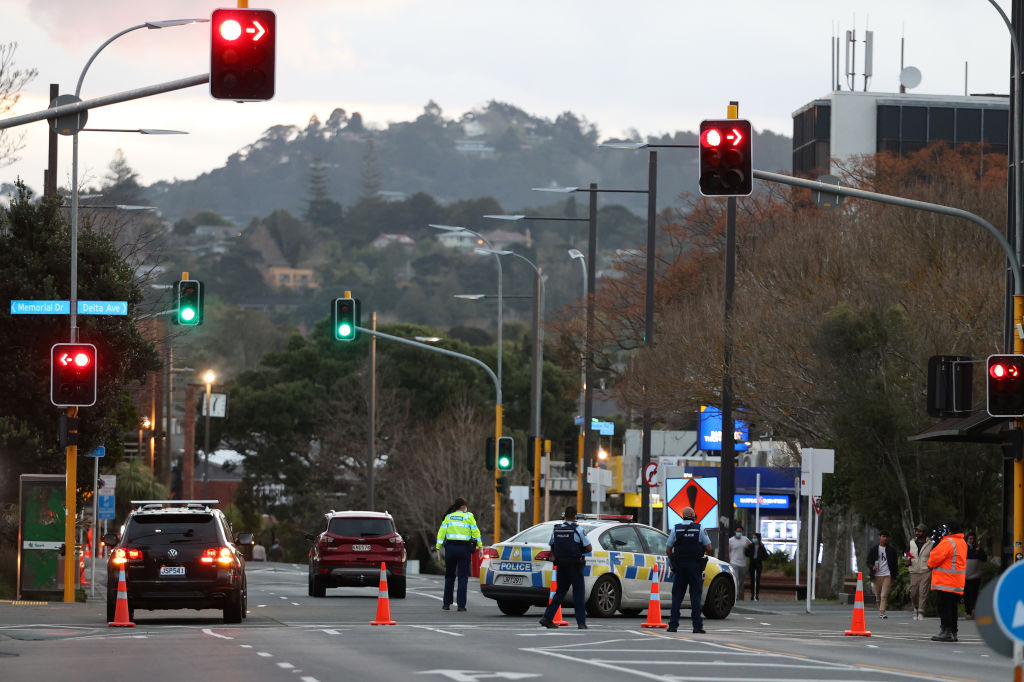 Police guard the area around Countdown LynnMall after a violent extremist carried out a terrorist attack stabbing six people before being shot by police on September 03, 2021 in Auckland, New Zealand. (Photo by Fiona Goodall/Getty Images)

A TERRORIST who was shot dead after he injured six people in a New Zealand supermarket knife rampage on Friday (3) was under round-the-clock surveillance.

Prime minister Jacinda Ardern said she was “gutted” that the man, a Sri Lankan national, had managed to carry out his “hateful” assault even though he was on a terror watch-list.

She said the man, who arrived in New Zealand in 2011, entered a shopping mall in suburban Auckland and seized a knife from a display before going on a stabbing spree.

“What happened today was despicable, it was hateful, it was wrong,” Ardern said, after the latest attack.

“It was carried out by an individual, not a faith, not a culture, not an ethnicity. He alone carries the responsibility for these acts.”

Asked about the man’s motivations, she said “it was a violent ideology and ISIS-inspired”, using an acronym for the Islamic State (Daesh) jihadist group.

Ardern said she was limited in what she could publicly reveal about the attacker because he had been before the courts previously and was the subject of court suppression orders.

The case failed after a judge ruled that planning a terror attack was not in itself an offence under existing laws.

The man was instead found guilty on lesser charges of possessing propaganda materials supporting Daesh and sentenced to 12 months’ supervision.

Ardern said authorities had to release the man because there was no legal reason to keep him in custody.

She said new terror laws had been drafted to close the loophole, but they had not yet been passed in parliament.

“The fact that he was in the community will be an illustration that we haven’t succeeded in using the law to the extent we would have liked,” she admitted.

Ardern said she was devastated that a known terror risk had managed to carry out an attack, saying all aspects of the incident would be reviewed.

“I know that we’ve been doing everything that we could, so I was absolutely gutted,” she said, describing her feelings upon learning about the stabbings.

Ardern did not disclose exactly how many other terror suspects were under surveillance in the community, saying only “there are very few people who fall into this category”.

She thanked Aucklanders who helped victims, ignoring coronavirus lockdown as the city attempts to control an outbreak of the delta variant.

“To everyone who was there and who witnessed such a horrific event, I can’t imagine how you are feeling but thank you for rushing to the aid of the people who needed you,” she said.

Police Commissioner Andrew Coster said authorities were confident the man was acting alone and there was no further known danger to society.

He acknowledged there would be questions about how an attack occurred in front of his officers, but defended their actions.

“I’m satisfied, based on the information to me, that the staff involved not only did what we would expect in this situation, they did it with great courage,” Coster said.

“The reality is that when you’re surveilling someone on a 24-7 basis, it’s not possible to be immediately next to them at all times.”

The Federation of Islamic Associations of New Zealand called the attack an act of hate.

“Terrorists who do such inhumane and vile acts do not belong to any religion,” said the group’s president Ibrar Sheikh.