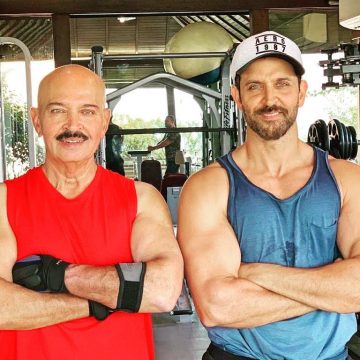 When a filmmaker works with an actor and the film becomes successful, they work with each other multiple times. We have many successful director-actor duos in Bollywood like Karan Johar-Shah Rukh Khan, Aditya Chopra-Shah Rukh Khan, Sanjay Leela Bhansali-Ranveer Singh, Sooraj Barjatya-Salman Khan, and others.

But today, let’s look at the list of father-son duos who became successful director-actor duos.

The first time Raj Kapoor directed Rishi Kapoor was in the film Mera Naam Joker where the latter played the younger version of the former. Though the film was a box office dud, Rishi received a National Award for his performance. Then after a few years, Rishi Kapoor made his debut as an adult in the film Bobby which was a super hit at the box office. The movie was directed by Raj Kapoor.

Hrithik Roshan made his Bollywood debut in 2000 with the film Kaho Naa Pyaar Hai. The film was a blockbuster at the box office and was directed by Hrithik’s father and veteran actor, Rakesh Roshan. After that, the two collaborated for films like Koi Mil Gaya, Krrish and Krrish 3. All the four films they did together were big hits and now we are waiting for Krrish 4.

The first time David Dhawan directed Varun Dhawan was in the film Main Tera Hero. The film did quite well at the box office and then the father-son duo once again collaborated for Judwaa 2 which became a blockbuster. Now they have teamed for the third time for Coolie. No 1 and we can expect a hattrick from them.

Veeru Devgn was a very prominent action director. The only film he directed was 1999 release Hindustan Ki Kasam which starred his son Ajay Devgn. Though the film wasn’t a big hit, it was also not a flop and was regarded as an average grosser at the box office.

We know that we are talking about father-son duos, but we have to add this father-daughter duo here as well. Mahesh Bhatt has directed daughter Pooja Bhatt in multiple hits like Daddy, Dil Hai Ki Manta Nahin, Sadak, Sir, Chaahat, Tamanna and Zakhm. Now they have once again collaborated for Sadak 2 which also stars Mahesh Bhatt’s younger daughter, Alia Bhatt.