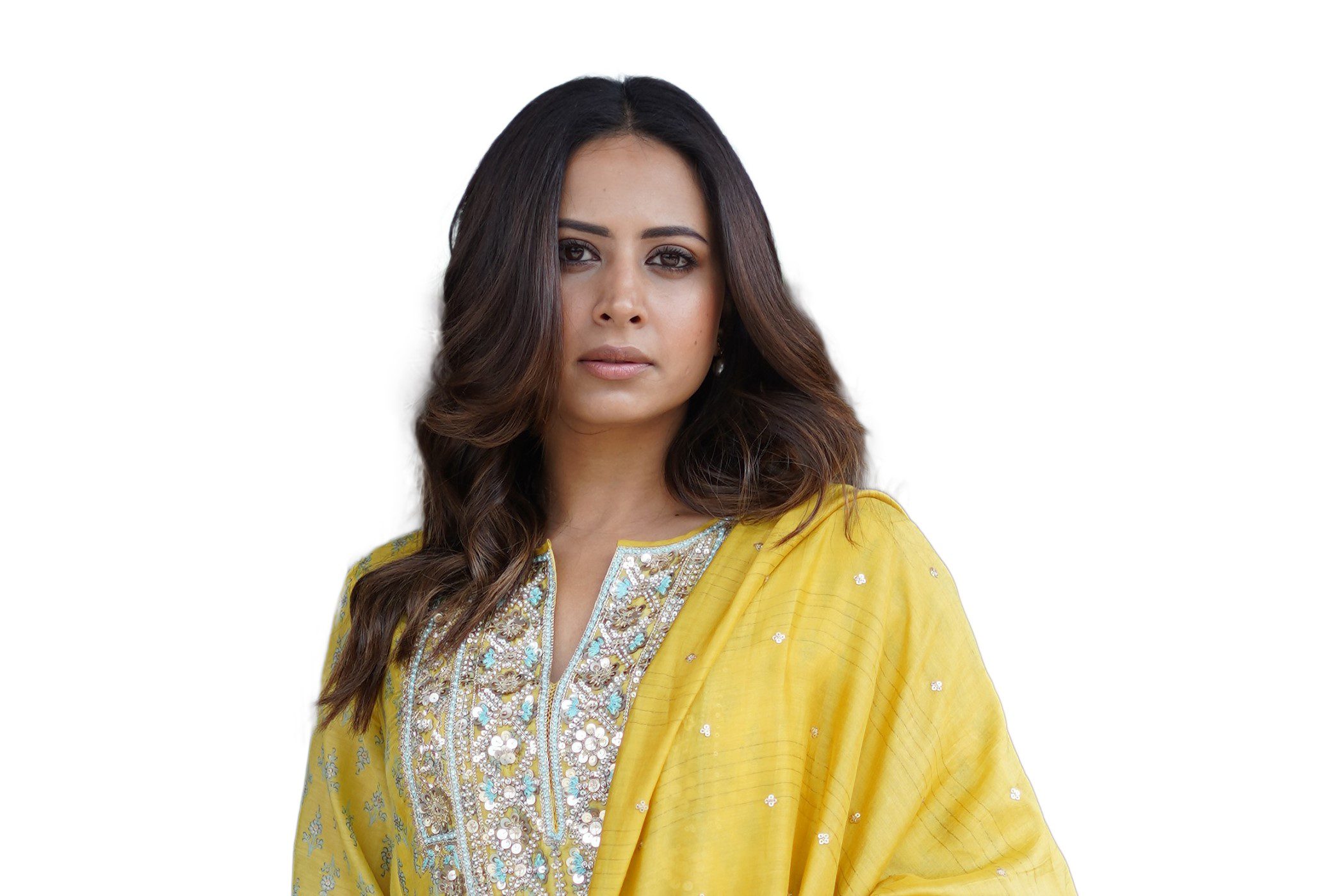 PUNJABI cinema has enjoyed a rapid rise in recent years and a big driving force has been Sargun Mehta.

The acclaimed actress has starred in a string of globally successful Punjabi films and most recently played the lead role in smash hit romantic comedy Saunkan Saunkne, which she also produced. With another four films due to be released before the end of this year, the hot right now star is helping take Punjabi cinema to even greater heights and continues an inspiring journey that started on television.

She is also one half of a power couple and married to popular actor Ravii Dubey.

Eastern Eye up caught with the loveable Indian star to discuss her game-changing rise in Punjabi cinema, latest movie, future hopes, inspirations, and secrets of a great acting performance.

How do you look back on your journey as an actor?
It’s been a very exciting journey. But in my first year of college, I thought this is not my thing and I didn’t want to do it. Theatre was compulsory for me, and it was a part of my extra-curricular activity, so I had to do it. I thought about leaving college in my second year because I believed I couldn’t do it.

What made you finally connect with acting?
When I didn’t get admission anywhere else in my second year, I had no option but to continue doing theatre and fell in love with it. Then working on television was a huge learning curve for me. I think every day, I am just learning on the job and it’s very exciting because each day brings something new. It’s one kind of job where you have something different each day and get to be a new person.

Which of your roles has been closest to your heart?
A lot of them are very close to me, but there are game changers in your life. Ones that change the perception of who you are. I felt the first time when people looked at me as an actor was when I did my Punjabi debut film Angrej in 2015. I think Dhan Kaur, my character in Angrej, is closest to my heart. Another favourite will be Kismat. I played Bani in it. This film worked wonders at the box office and changed the game.

Did you ever imagine making such a huge impact in Punjabi cinema?
(Smiles) No, I think I just walked in clueless. I remember my nani (grandmother) saying to me one day that a Punjabi film was on, so let’s go watch it. It was back in 2012 or 2013. After watching the film, I realised I wanted to do something like this and started practising Punjabi again. I left a TV show saying I am doing a Punjabi film. I had no idea what I was going to do. I had no offer and didn’t know anyone. It was just meant to happen.

You must be proud of how amazingly well Punjabi films have been doing?
I am very very proud. Frankly, when I started and signed my first Punjabi film I had taken on a new manager at that time. He was working in the south and a little in Bollywood. I told him I had a Punjabi film in my hand, and he advised me against it, saying, ‘if you do it, you will be stuck doing regional films and won’t be able to do anything big in life’. After that, I kept thinking, I won’t do it.

What changed your mind?
But when I sat across the table with my friends, I thought why shouldn’t I, thinking today it may seem small, but tomorrow you never know. I told him you can leave, and I am going to do the film. I think it’s the best decision of my life. In 2015, I used to do one film a year and the amount of films made were about 12. Today, around 70 Punjabi films a year are made. Today, the industry talks about Punjabi music. It has achieved a level where it has its own flavour and audience.

Have you had a chance to enjoy your amazing success in recent years or have you been too busy?
I think you are not enjoying success if you are free and can only enjoy it when you are busy. That is the idea of success. I know people say you can pause and enjoy it, but in our field I feel there are enough pauses that come naturally or are forced sometimes.

Those are pauses where you sit back and tell yourself that you have done great. And you are doing great. I actually enjoy it when I’m busy.

You seem to have a golden touch when selecting projects. How do you choose a film?
I don’t intellectualise it at all. I do feel like ‘OMG, great film’, sometimes. Other times, I just hear the script and feel it’s very basic, but fun, and I liked and enjoyed hearing it. Sometimes, it’s just pure gut and sometimes it’s a coin toss. Eighty per cent of my films are coin tosses.

What was the experience like of working on your most recent release Saunkan Saunkne?
It is very very close to my heart. When I heard it for the first time, somebody else was producing it with another hero. Then we chose not to do this film and started another one for some reason.

But this script got stuck in my head. I kept saying to (writer-director) Amberdeep Singh, ‘I want to do this film.’ He said to me, ‘I don’t have dates’. So I said, ‘let me get the director.’ Then I had a word with Amarjit Singh and asked him to direct it. He heard the film and said ‘yes, I love it’.

What happened next?
Then I jumped on and said I will produce it. I love the film. Then we got the whole cast on board and for me the process started before anybody else. Apart from enjoying the success of Saunkan Saunkne as an actor, I’m loving this whole new role as producer that Ravii (Dubey) and I are playing.

Which confirmed projects do you have on the way?
So, June is Sohreyan Da Pind Aa Gaya with Gurnam Bhullar. July is Challa Mud Ke Nahi Aaya. September is Moh by Jagdeep Sidhu. October is Babe Bhangra Paunde Ne with Diljit Dosanjh, directed by Amarjeet. Next year begins with Niga Marda Aayi Ve by Rupinder Inderjit.

You are very much in demand. What is the plan going forward?
The plan going forward is to always be in demand. I just feel that I don’t want to lose my way, either over intellectualising or overthinking any success. Sometimes when the film works you tend to keep repeating that because it seems to be like a formula, and I feel like there is no formula. So, when you have done a film, whether it’s done well or not, you should leave it right there, move ahead and forget about it.

That is a really interesting take…

Yes, that works beautifully because when you leave success at this spot, move ahead, and don’t take it into your head, you enjoy what you’re doing next. If your film fails at the box office, doesn’t do well, or how you thought it would do, even then leave it at the same spot and move ahead. Language is not something I keep in my head. I’m open to any language. The content or the concept of the film has to be good and that is the plan.

Do you have any dream role?
So many. But actually, I think now I want to play a superwoman.

What inspires you as an actress?
Just the fact that I have to get up every day and be someone new and not just be Sargun. Those days where I am not just Sargun, and I love it.

You are a great actress. What would you say is the secret of a great performance?
Not knowing that it’s a great performance. Not taking the baggage of having to want to perform great and not having to take any character way too seriously. When you don’t take it too seriously, you act how you would normally be and it becomes natural. You don’t even know when you slipped into the character.

What are your other big passions away from work?
Dancing! It’s something I am good at, but not great at it. I am getting better every day, but I want to be really good at it and learn a lot of dance forms.

Apart from that, being a producer gives me a kick. I think being a businessman’s daughter means business runs through my veins.

What kind of content do you enjoy watching as an audience?
Actually, I watch all genres except for horror. I can watch anything.

If you could master something new, what would it be?
It would be singing. I would love to master that.

You have become a hero to many, but who is your hero?
My hero is actually just the one person who I look up to, appreciate, love and is everything to me, and that is Ravii. He is in every sense my hero. He is everything.

Would you like to give a message for your fans?
They have been so kind. I feel so blessed. Sometimes our work is not great and sometimes it is great, but our audience sticks by us. My fans have stuck by me, and I love that. Thank you for all the love and blessings. I genuinely appreciate it from the bottom of my heart.