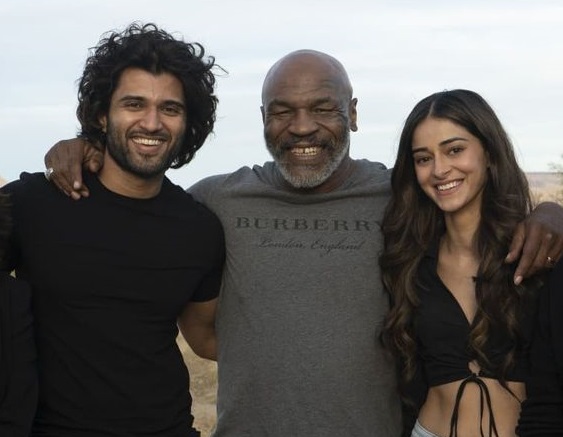 And as he celebrates his birthday today, team Liger has a special message for him. Producer of the film, Karan Johar took to his Instagram to share a video where Vijay Deverakonda, Ananya Panday, and he can be seen giving a special birthday shoutout to him.

Earlier in April, Tyson wrapped up dubbing for the film. His acting portions were shot in the US.

Liger has been hogging the limelight ever since its inception but due to the Covid-19 pandemic, the makers of the movie put a pause on its shoot.

The film was slated to get a worldwide theatrical release on September 9 last year but was postponed due to the rising Covid-19 cases at that time.

Directed by Puri Jagannadh, the film will also feature Ramya Krishnan, Ronit Roy, and Vishu Reddy, among others.

On the occasion of Vijay Deverakonda’s birthday in May, the makers had unveiled The Hunt Theme of the film. An over one-and-a-half-minute lyrical video gave a glimpse of Vijay’s remarkable transformation, his intense look, and his fighting spirit. It drops hints about Vijay’s inspiring journey from the Slumdog of Mumbai streets to becoming the champion in Mixed Martial Arts.

At the launch event of his next Jana Gana Mana, Vijay declared Liger a hit in advance. “People make it aware to me that there is this huge following and I am happy to know that it exists. But having said that I don’t feel any kind of pressure with Liger because I know it’s a sure hit. I am not bothered about it, I am just waiting for the film to release,” he said.

Liger has been co-produced by Charmme Kaur along with the director’s production house Puri Connects.

The film is now slated to get a worldwide theatrical release on August 25, 2022, in five languages – Hindi, Telugu, Tamil, Kannada, and Malayalam.