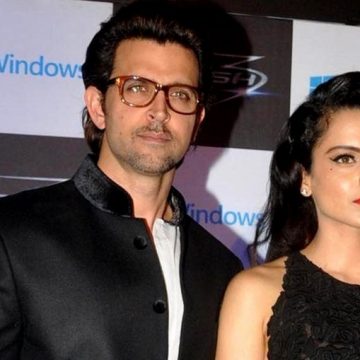 From the past few years, there’s a battle going between Hrithik Roshan and Kangana Ranaut. While the latter claims that they were in the relationship and Hrithik had told her that they will get married, the actor has always maintained that they were not in a relationship. Well, the truth is only known to them.

Hrithik has kept mum on the whole issue, apart from a television interview that he did a couple of years ago. However, now recently in an interview with a daily, when he was asked about Kangana’s digs and also about their legal case, the actor said, “I have come to realise that bullies have to be treated with a certain amount of patience, and not be engaged with. It is upon the civil society and those who claim to be just and fair to see and observe if there is harassment. Also, being who I am, if I choose to confront as per laws, I become the aggressor. If I withdraw from a film-clash that I know has been pre-designed, then I become a weakling penning a sob story. I have learned to not get affected by either. Although, to be honest, my only grouse is with those supposedly ‘enlightened’ people who praise and often cheer this behaviour in the name of ‘new’ and ‘refreshing audacity’, without any desire to be rational or truthful. They are the enablers who have allowed this circus to continue for six years. There is no legal case that I directly have with the lady (Kangana), and the reason I cannot have one is because apparently a guy cannot be stalked in India.”

Whenever Hrithik has spoken up about Kangana, he has maintained a certain amount of dignity and has never tried to insult the actress.

Talking about Hrithik’s movies, the actor is gearing up for the release of Super 30 which is slated to hit the screens on 12th July 2019.

Sri Lanka takes objection to US ban on Army Chief