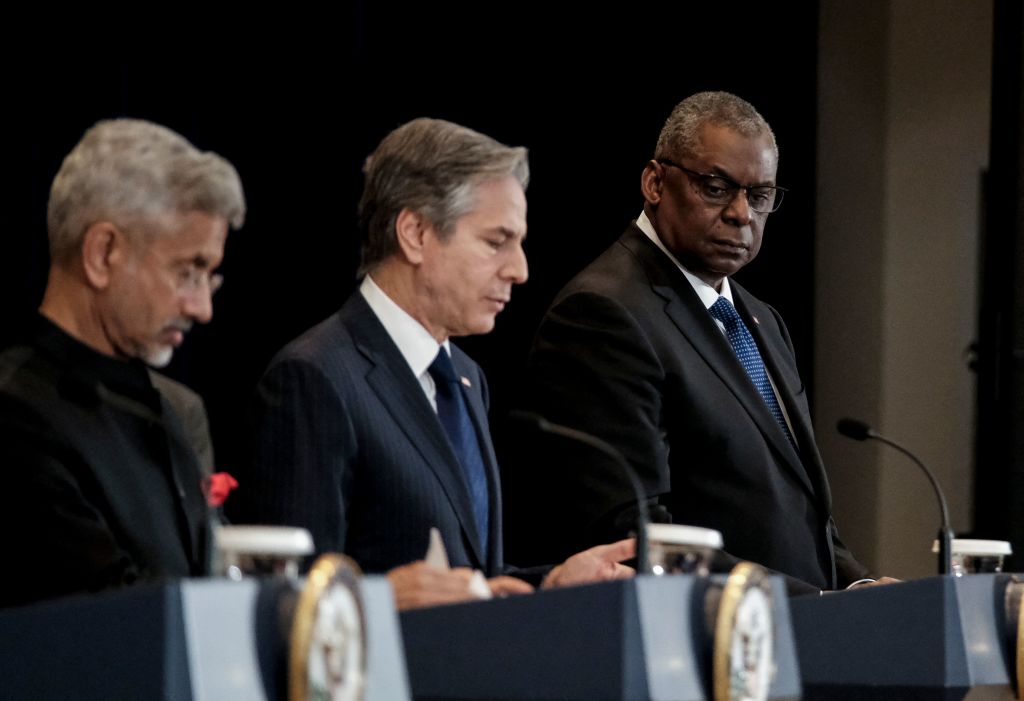 INDIA’s relationship with Russia was developed over decades at a time when the US was not able to be a partner, secretary of state Antony Blinken.

Top officials of the Biden administration on Monday (11) showed an understanding of New Delhi’s position on Ukraine war.

“India’s relationship with Russia was developed over decades at a time when the US was not able to be a partner to India. Times have changed,” Blinken told reporters at a joint press conference with defence secretary Lloyd Austin and their Indian counterparts external affairs minister S Jaishankar and defence minister Rajnath Singh.

“Today, we are able and willing to be a partner of choice with India across virtually every realm: commerce, technology, education and security. And that was very much the nature of the conversation that we had today. When it comes to oil purchases, sanctions, et cetera, I’d just note that there are carve-outs for energy purchases,” he said in response to a question.

The top US diplomat, however, cautioned the allies and partners against the increase in buying Russian energy.

“Of course, we’re encouraging countries not to purchase additional energy supplies from Russia. Every country is differently situated and has different needs, but we’re looking to allies and partners not to increase their purchases of Russian energy,” he said.

The virtual summit between prime minister Narendra Modi and president Joe Biden discussed ways of mitigating the profound impact that this is having on global food supplies and prices, commodity markets, and working together to achieve that.

“I would note India has made very strong statements in New York at the UN, the minister before the Indian Parliament, condemning the killing of civilians in Ukraine, calling for an independent investigation of these atrocities. And I would also note that India is providing significant humanitarian assistance to the people of Ukraine, notably medicines, which are very necessary and in real demand,” Blinken said.

“We, as a general proposition, are consulting with all of our allies and partners on the consequences of Putin’s war, the atrocities being committed against the people of Ukraine. In our judgment, it is important that all countries, especially those with leverage, press Putin to end the war.”

During the summit, Biden made no major demands of India. There was no indication of significant progress toward a unified posture on the Ukraine conflict.

But White House spokeswoman Jen Psaki said Biden “made clear that he does not believe it’s in India’s interest to accelerate or increase imports of Russian energy and other commodities.”

Modi has tried to walk a tightrope between maintaining relations with the West and avoiding alienating Russia, but has raised concerns in Washington by continuing to buy Russian oil.

He merely said the situation was “very worrying” and recalled his support for talks between Russia and Ukraine, which Washington views with skepticism.

Jaishankar showed a hint of annoyance when he told reporters asking about Biden’s push for India to cut energy imports from Russia that “probably our total purchases for the month would be less than what Europe does in an afternoon.”

Biden has been pressuring world leaders to take a hard line against Moscow, although a US official said there was no “concrete ask and concrete answer” on energy imports.

Failing to win over such a key ally to its cause, Washington appears instead to be heaping on the pledges of friendship to prevent India from gradually slipping into the Russian camp, with Moscow actively courting it.

Biden began the meeting by saluting the “deep connection” between the two countries and said he wanted to continue their “close consultation” over the war.

Biden and Modi failed to reach a joint condemnation of the Russian invasion when they last spoke in early March at a meeting of the so-called “Quad” alliance of the US, India, Australia and Japan.

US monitoring rise in rights abuses

Blinken added that the US was monitoring what he described as a rise in human rights abuses in India by some officials, in a rare direct rebuke by Washington of the Asian nation’s rights record.

“We regularly engage with our Indian partners on these shared values (of human rights) and to that end, we are monitoring some recent concerning developments in India including a rise in human rights abuses by some government, police and prison officials,” Blinken said on Monday.

Blinken did not elaborate. Singh and Jaishankar, who spoke after Blinken at the briefing, did not comment on the human rights issue.

Blinken’s remarks came days after US Representative Ilhan Omar questioned the alleged reluctance of the US government to criticise Modi’s government on human rights.

“What does Modi need to do to India’s Muslim population before we will stop considering them a partner in peace?” Omar, who belongs to Biden’s Democratic Party, said last week.