Why did Sadhguru choose to ride a bike for the ‘Save Soil’ campaign? 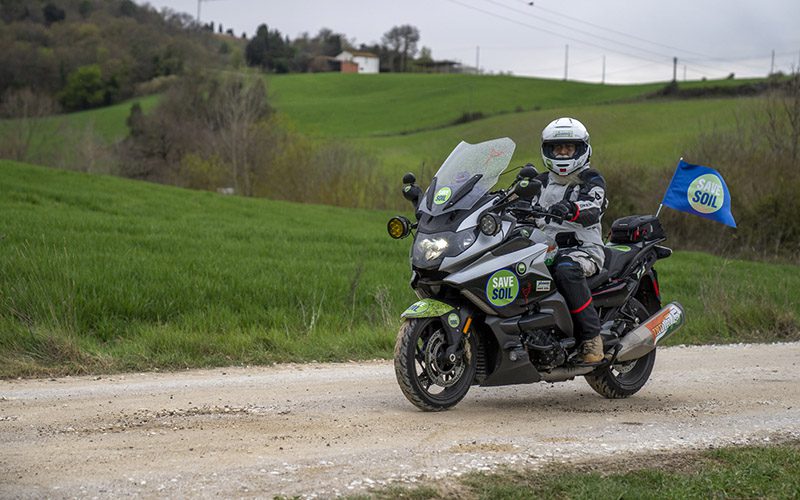 Spiritual guru Sadhguru Jaggi Vasudev whose fondness for motorcycles is well-known recently completed 100 days of solo biking, traversing 27 nations as part of his ‘Save Soil’ campaign.

The 64-year-old is aiming to cover a distance of over 30,000-km in the journey that he began in the United Kingdom. Sadhguru hopped on to a BMW K1600 GT sports bike for the journey.

In an exclusive interview with ANI, the automobile enthusiast revealed the real reason behind choosing to bike it across 27 countries. As part of his movement, the spiritual leader is engaging with heads of states, government officials and experts in 27 countries to underline the urgent need for concerted action to save soil.

Sadhguru had in his previous ‘Rally for Rivers’ campaign also used motorcycles.

“When I was doing Rally for Rivers, somebody brought a motorcycle because, in Bangalore and Mysore area, everybody knows about my motorcycling. I criss-crossed India at that time. So they brought it and said why don’t you ride? I was not sure if I can ride this because, for 32 years, I have never thought about motorcycles. Then I sat on it and realised I have not lost a day, so since then I have been travelling on a motorcycle,” he said.

The founder of the Isha Foundation said that there was no better way than riding a motorcycle to maintain social distancing in view of the COVID-19 pandemic.

When asked if he enjoys riding a bike, the 64-year-old said, “I don’t enjoy anything in my life. I am just joyful.”

Elaborating further on the reasons behind riding a bike than flying cities to cities, the spiritual leader said, “If I flew my city to city by an airline, do you think it would excite anybody’s interest if I drive a car then no. If I walked then it may be… I would kill myself probably. If I ride a bicycle, maybe a sure death. The motorcycle is near death but not death. If you make a mistake, you could die. There are many dangerous moments out there.

Sadhguru pointed out that he faced many dangerous moments during his journey. “Yes, it’s natural when you are on two wheels for so long. 100 days you are on a motorcycle, going from the event to event, you would try to get to some place on time. Always you are way faster than the rest of the traffic. If you are riding like that, it could happen. Till now, we have managed without any injury or anything like that… It is not simple. Every day, we are in a new country, a new city. Till now I have done 526 events in 76 days.”

Meanwhile, Sadhguru plans to conclude his ongoing campaign at Coimbatore where he is scheduled to reach on June 21, on International Yoga Day.