Which words were Harini Logan, the Indian-origin teen who won Spelling Bee 2022, asked to spell? 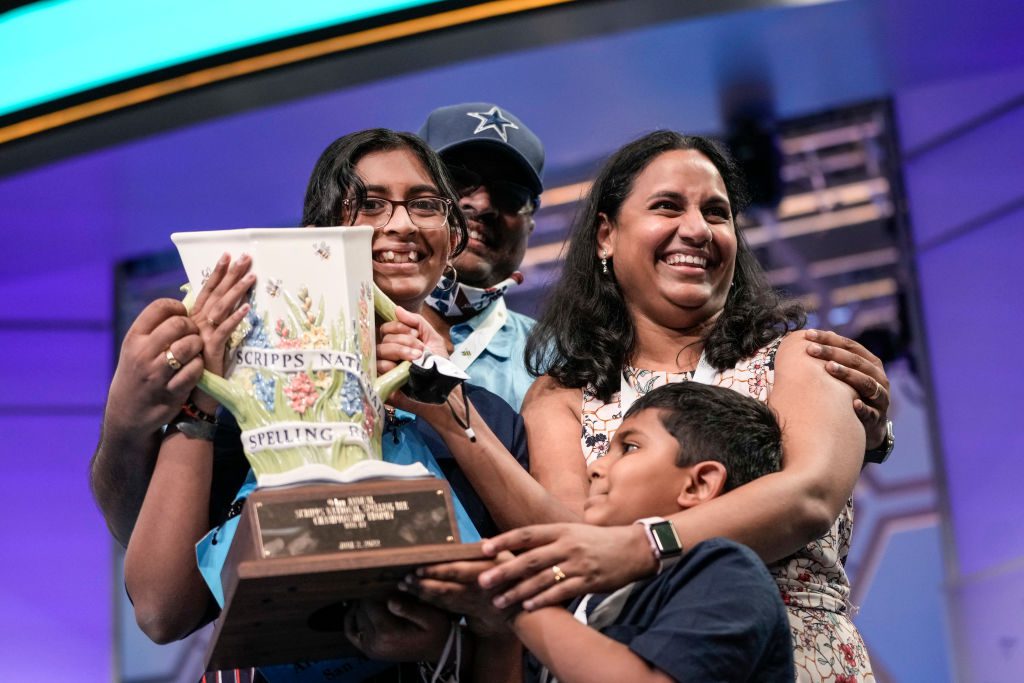 She defeated Vikram Raju in a marathon, first-of-its-kind spell-off, a format that tested the contestants on how many words they could correctly spell within 90 seconds.

Logan took home the $50,000 (£39,772) cash prize and Scripps Cup trophy on top of awards from Merriam-Webster and Encyclopedia Britannica.

The final two competitors had trouble deciphering their words between rounds 13 and 18. At that point, judges opted to institute the first spell-off, 90 seconds to spell as many words as possible correctly.

However, the judges conferred during a break and ruled that the answer she gave could be correct, since it could mean “to breed” or “to swarm.” Head judge Mary Brooks explained the ruling and Logan, who only minutes earlier had learned of her reversed fortunes, returned to her seat on the stage, USA Today reported.

“There was a few minutes in between that were frantic,” Logan was quoted as saying.

Logan nearly did not advance past the word meaning round on Thursday (2) after her answer for “pullulation” was rejected.

“I was like ‘Wow, I’m out. This is it,’ ” Logan said after she was reinstated in the final round.

“Just so surreal, it’s my fourth time at the Bee. This is such a dream, this is my fourth bee and I’m just so overwhelmed,” said Logan on stage holding the trophy.

Of the first-ever spell-off, she said: “At first I was a little uneasy and I decided to take it in stride … I just had to take a deep breath and tell myself to go out there and do my best and whatever happens, happens.” Vihaan Sibal, a 13-year-old from Texas, finished third while Saharsh Vuppala, a 13-year-old eighth-grader from Washington, was fourth.

The Spelling Bee, which features elementary and middle school students spelling words that would cause most adults to stumble, has had a tumultuous few years. The National Spelling Bee was launched in 1925.

Owing to the Covid-19 pandemic, the competition was cancelled in 2020.

The Bee returned last year, but with a few changes. The event featured three rounds completed virtually, rather than in-person, with 209 contestants – down from 562 in 2019. The finals were then held in person at ESPN Wide World of Sports Complex in Florida, rather than in the National Harbor in Maryland, where the event had typically been held in recent years.

Though still down from pre-pandemic numbers, this year began with 234 contestants, an increase from last year. Of those who started, only 12 participated in Thursday’s final competition.

This year’s host was LeVar Burton. The Emmy and Grammy-award winner hosted the semifinal and the final round of the event.

The Bee began incorporating multiple-choice “word meaning” rounds last year. Competitors aren’t asked to spell; instead, they are given a word with three definitions and they must choose the correct one.

“Harini Logan’s final winning word: moorhen. Part of speech: noun. Def: the female of the red grouse. Language of origin: This word is originally English. Sentence: The hunter took aim at the moorhen after the beaters had flushed it from the heather,” Scripps National Spelling Bee said in a tweet.

Over the past 20 years, Indian Americans have been dominating the Spelling Bee contest even though they comprise only about 1 per cent of the US population.