Whenever I visit her, she offers me sweets with her own hands, wipe my face with napkin: PM Modi pens blog on mom’s 100th birthday 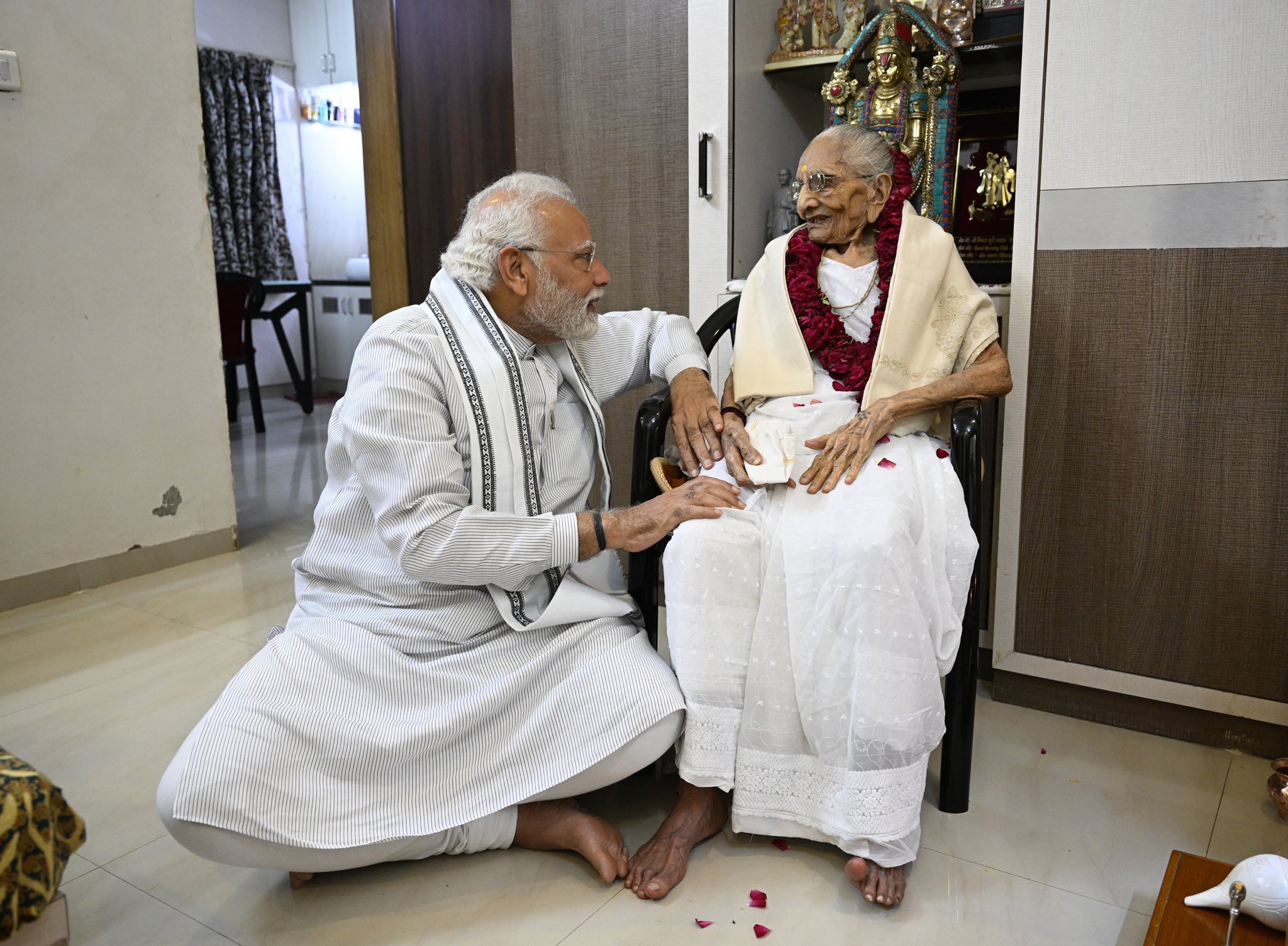 ON the 100th birthday of his mother Heeraben Modi, prime minister Narendra Modi on Saturday (18) penned an emotional blog and recollected some special moments from his childhood that he spent with his mother.

He recalled several sacrifices made by his mother as he grew up and mentioned various qualities of his mother that shaped his mind, personality, and self-confidence.

In his blog post, Modi said, “Mother – is not just any other word in the dictionary. It encompasses a whole range of emotions – love, patience, trust, and a lot more. Across the world, irrespective of country or region, children have a special affection for their mothers.

A mother not only gives birth to her children, but also shapes their mind, their personality, and their self-confidence. And while doing so, mothers selflessly sacrifice their own personal needs and aspirations.”

“Today, I feel extremely happy and fortunate to share that my mother Heeraba is entering her hundredth year. This is going to be her birth centenary year. If my father had been alive, he too would have celebrated his 100th birthday last week. 2022 is a special year as my mother’s centenary year is starting, and my father would have completed his,” he said.

PM Modi said his mother is still the same, adding that age may have taken a toll physically, but she is as mentally alert as ever.

Recalling hardships his mother faced during her childhood, Modi said, “My Mother is as simple as she is extraordinary. Just like all mothers.”

In his blog, the prime minister said his mother Heeraben was born in Visnagar in Mehsana in Gujarat, which is quite close to Vadnagar. At a tender age, she lost her mother to the Spanish Flu pandemic. Heeraben does not even remember her mother’s face or the comfort of her lap. She spent her entire childhood without her mother. She could not rest in her mother’s lap like we all do. She could not even go to school and learn to read and write. Her childhood was one of poverty and deprivation.

He recalled the tiny house in Vadnagar with mud walls and clay tiles for a roof where he stayed with his parents and siblings. He mentioned innumerable everyday adversities that his mother encountered and successfully overcame.

He mentioned how his mother not only did all household chores by herself but also worked to supplement the meagre household income. She used to wash utensils at a few houses and take out time to spin the charkha to help meet the household expenses.

PM Modi reminisced, “During the rains, our roof would leak, and the house would flood. Mother would place buckets and utensils below the leaks to collect the rainwater. Even in this adverse situation, Mother would be a symbol of resilience.”

Recalling his childhood, the prime minister said, “In Vadnagar, our family used to stay in a tiny house which did not even have a window, let alone a luxury like a toilet or a bathroom. We used to call this one-room tenement with mud walls and clay tiles for a roof, our home. And all of us – my parents, my siblings and I, stayed in it.”

PM Modi said his father made a ‘machaan’ from bamboo sticks and wooden planks to make it easier for Heeraben to cook food. She used to climb on the machaan to cook, and the entire family would sit on it and eat together.

“A mother’s penance creates a good human being. Her affection fills a child with human values and empathy. A mother is not an individual or a personality, motherhood is a quality. It is often said that the Gods are made according to the nature of their devotees. Similarly, we experience our mothers and their motherhood according to our own nature and mindset,” he stated.

Modi mentioned that his mother finds happiness in other people’s joys and is extremely large-hearted. He recalled, “A close friend of my father used to stay in a nearby village. After his untimely death, my father brought his friend’s son, Abbas, to our home. He stayed with us and completed his studies. Mother was as affectionate and caring towards Abbas just like she did for all of us siblings. Every year on Eid, she used to prepare his favourite dishes. On festivals, it was commonplace for neighbourhood kids to come to our house and enjoy Mother’s special preparations.”

Modi wrote that his mother made him realise that it was possible to be learned without being formally educated. He shared an incident when he wanted to publicly honour all his teachers, including his biggest teacher – his mother. However, his mother declined saying, “See, I am an ordinary person. I may have given birth to you, but you have been taught and brought up by the Almighty.”

Modi further added that though his mother did not come to the event, she made sure that he called someone from Jethabhai Joshi Ji’s family – his local teacher, who taught him alphabets. “Her thought process and farsighted thinking have always surprised me,” he said.

The prime minister said whenever he goes to Gandhinagar to visit his mother, Heeraben offers him sweets with her own hands. And just like a young child’s doting mother, she takes out a napkin and wipes his face once he finishes eating. She always has a napkin or small towel tucked into her saree.

Modi said in his mother’s life story, he sees the penance, sacrifice, and contribution of India’s ‘matrushakti’. “Whenever I look at Mother and crores of women like her, I find there is nothing that is unachievable for Indian women. Far beyond every tale of deprivation, is the glorious story of a mother. Far above every struggle, is the strong resolve of a mother,” he stated.

“Ma, a very happy birthday to you. Best wishes as you start your birth centenary year. I have never been able to muster the courage to write at length publicly about your life until now. I pray to the Almighty for your health and wellbeing, and your blessings on all of us. I bow at your feet,” concluded Modi.