‘Truly an inspiration,’ says Mahesh Babu as he and his wife meet Bill Gates in New York 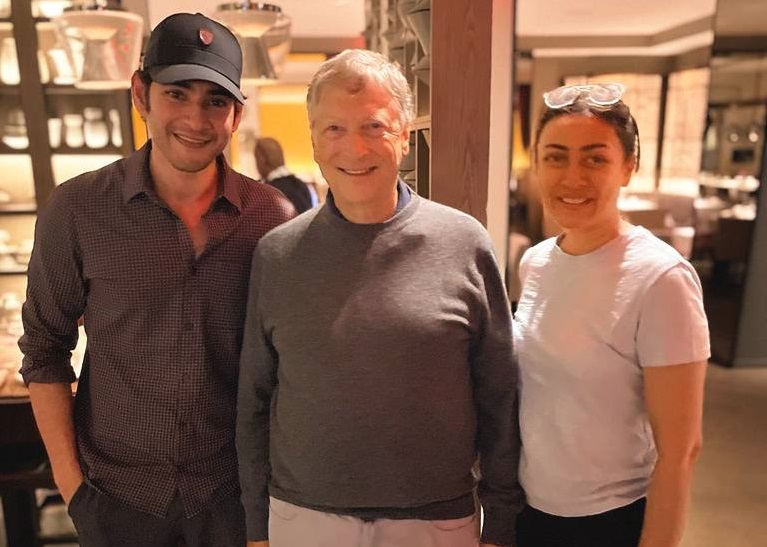 Telugu star Mahesh Babu is enjoying his vacation with his wife Namrata Shirodkar and treating his fans with some glimpses from their vacay.

Taking to his Instagram handle, the 46-year-old actor posted a picture with Bill Gates and captioned it, “Had the pleasure of meeting Mr. @thisisbillgates! One of the greatest visionaries this world has seen… and yet the most humble! Truly an inspiration!!”

In the picture, Mahesh was seen donning a checked shirt that he teamed up with black trousers. And to complete his look he opted for black sports shoes and a cap. On the other hand, Microsoft’s co-founder sported a charcoal sweatshirt and grey trousers.

While Namrata wore a casual white tee that she paired with flared pants. To complement her entire look, she was seen carrying transparent sunglasses over her head.

Mahesh with his wife and two children- Sitara Ghattamaneni and Gautham Ghattamaneni have been on a holiday for a while. During their tour, they visited different parts of Europe. Currently, they are in New York where they met Bill Gates.

Telugu actor also shared a picture with Bill Gates at a restaurant.

He wrote, “A that was” along with heart-eye emojis.

Meanwhile, on the work front, Mahesh Babu was last seen in the Telegu film Sarkaru Vaari Paata, which turned out to be a major blockbuster at the ticket window. The film also starred Keerthy Suresh in a pivotal role and was directed by Parasuram Petla. It was released in theatres on May 12 and set the cash registers jingling.

After the success of his recent film Sarkaru Vaari Paata, Mahesh Babu will soon be seen sharing the big screen with Pooja Hedge in Sukumar’s next directorial venture. The superstar is also teaming up with ace filmmaker SS Rajamouli on an untitled film, which is being written by Rajamouli’s father KV Vijayendra Prasad.

“The film that  Rajamouli will make with Mahesh Babu is based on a  terrific idea, never attempted before. But Mahesh wants the screenplay to be worked-upon and fine-tuned. Rajamouli is more than happy to oblige” a source earlier told a publication.