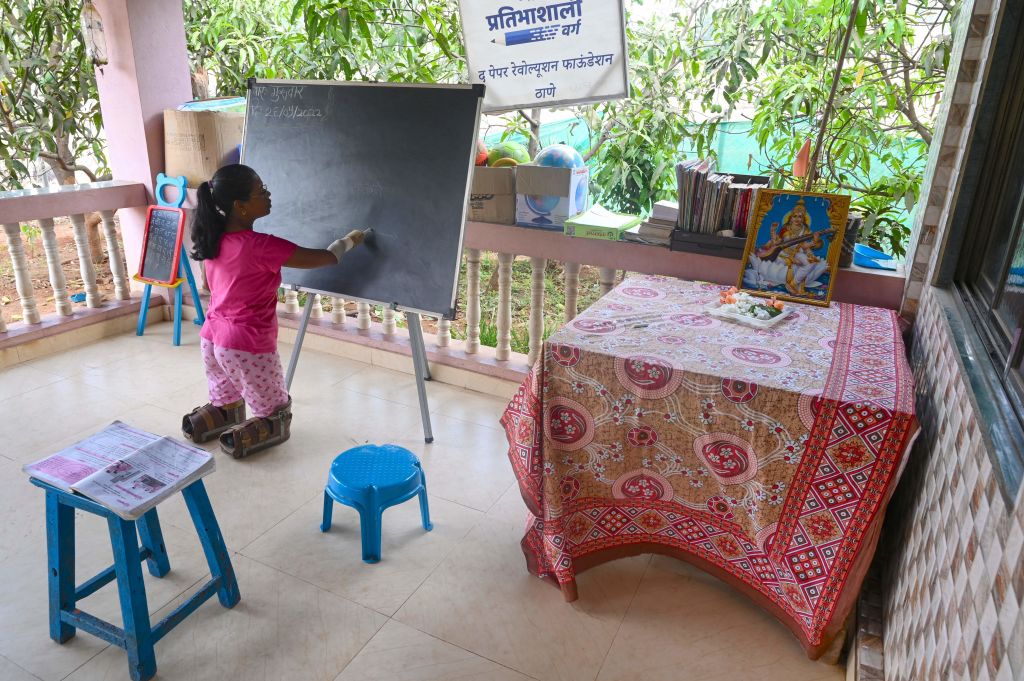 WHEN gangrene robbed Indian teacher Pratibha Hilim of her hands and feet three years ago, her dreams of returning to class gave her the strength to endure.

The 51-year-old now gives her lessons from home, wielding a pen or a stick of chalk strapped to her arm, for youngsters in a remote community where opportunities for education are scarce.

“I am a teacher, which means someone who cannot sit still but has to do something with children — teach them or be with them,” she said in sun-baked Karhe village, a few hours’ drive east of Mumbai.

“I’ve loved children since my childhood and if I sit around doing nothing, I would be in a different world, thinking of what happened to me.”

Hilim came down with a fever in 2019 that was so severe she lost consciousness.

Doctors diagnosed her with a severe case of dengue fever and told her the onset of gangrene required the amputation of her right hand.

Within weeks, the infection forced surgeons to remove her other hand and both her legs below the knee.

“When they amputated my first hand, I felt bad that I won’t be able to do anything further. I went into depression and did not speak to anyone for eight days,” she said.

Gangrene is the death of body tissue due to a lack of blood flow or a serious bacterial infection.

With encouragement from her family during months of recuperation, Hilim found purpose in a return to teaching.

She had worked for nearly three decades in a local primary school but in 2020, with schools shut during the coronavirus pandemic, she began giving lessons at home to children whose families did not have the money to pay for online learning.

Schools reopened earlier this year, but 40 children from the village still come to Hilim’s home for regular classes.

“My children love to study,” said Eknath Laxman Harvate, a farmer and labourer, whose daughter is a regular student of Hilim’s.

Like many in Karhe, Harvate had to drop out of school and work as a teenager as his family did not have the money to support his education.

He said he wanted a better future for his own children.

“We will educate her until she wants to,” Harvate said.

“I wish I had kept studying… I feel sad that due to problems at home I couldn’t continue and had to start farming.”

‘I can do everything’

Hilim, like many of her students, is an Adivasi — an umbrella term for members of India’s indigenous tribal communities.

Adivasis around the country are subject to entrenched discrimination and their geographic isolation has left them without a share of the spoils of India’s booming economy.

Many families in Karhe are compelled to pull their children out of the classroom so they can work to boost meagre household incomes.

“Once they can read and write, that is enough, meaning the children are ready to work in the fields,” Hilim said.

But Hilim, who is now waiting for prosthetic limbs to be fitted, wants to push children to keep learning and choose their own destinies.

She says her own struggle to return to class is a testament to the power of resolve.

“I thought that with no limbs I was nothing, but then I made my mind firm,” she said.