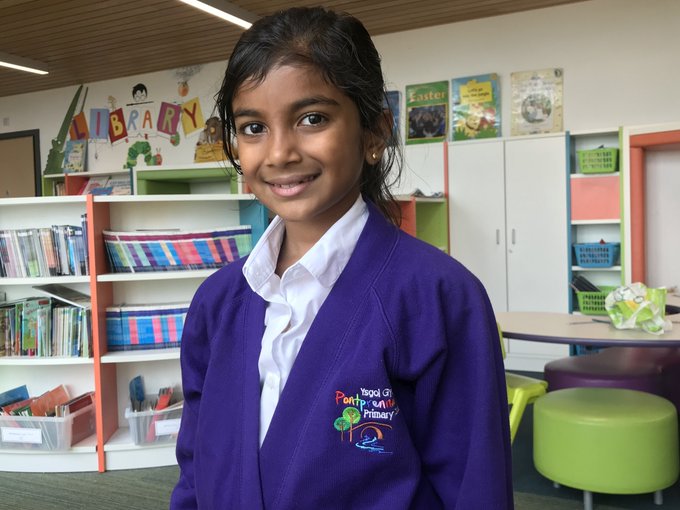 AN eight-year-old British Indian girl in Cardiff has created the world record as she became the youngest person to recite the capitals of 195 countries along with their currencies in 7 minutes and 15 seconds, according to reports.

Anne Winston from Kerala in southern India achieved the feat during a live-streamed event last week organized by OMG Book of World Records.

She is the elder daughter of Winston Jacob and Jincy Winston and is a year 3 student at Pontprennau Primary School in Cardiff, Wales.

Winston defeated the 10-year-old existing record holder and was presented with a certificate live on air.

“8 yr old Anne Winston from @Pont_Primary has created history by becoming the youngest person to recite the capital cities & currencies for all 195 countries across the world, in a record time of 7min 15 secs in an event by OMG Book of World Records,” Cardiff Council wrote on Twitter.

Her father said that Winston was curious to learn about countries, their capitals and currencies across the world at the age of three.

“What makes this achievement spectacular is her entire knowledge was self-taught over a period of 4 years. From a very young age we noticed Anne had a talent for retaining information and all we did was encourage her. We never thought of achieving any record but we are happy that she secured it,” her father was quoted as saying by the Times of India.

“My learning was quite casual, initially on a weekly basis where I used to spend 15 to 20 minutes learning a new set of capitals and currencies. Towards the end, I was practising on a daily basis,” Winston said.

“I dedicate this achievement to my grandfather who passed away recently. I hope my attempt inspires many other children across the world.”

According to reports, the whizz kid has won a number of badminton tournaments in the under-11 category and also practices Kung-Fu and swimming.

Pontprennau headteacher Ian James told the Independent: “Anne is an incredible young girl who adores all aspects of her learning. Her world record demonstrates her superb memory skills and general knowledge. It is a privilege to have Anne as one of our pupils.”