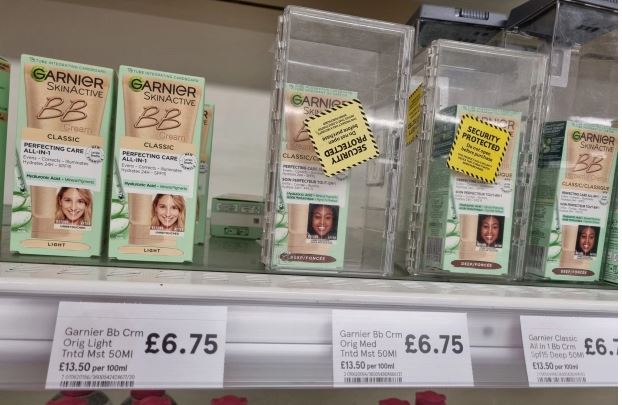 Supermarket chain Tesco has apologised to a mother-of-three after she complained that ‘racist’ security tags were placed on cosmetics for black skin but not lighter skin in one of its stores, according to reports.

Natalie Westgate said that she spotted Garnier’s Skin Active BB Cream for dark skin was put in security boxes when she visited the Tesco store in Osterley, West London with her daughter.

She took photos of the products and posted them on social media. Westgate pointed out that only the ‘deep’ skin tone product was placed in a security box, not the ‘light’ shade.

“I understand you have to security box items but do you think it is ok to only have the dark range security boxed and not the entire range? Please ask your race and ethnicity network and Black Voices Advisory Group what they think to security only boxing the dark range then get back to me,” she wrote on Twitter.

“I’m just disgusted, it’s ok to try to say they are inclusive but only security boxing items for a certain demographic is just plain racist,” she told The Sun.

Tesco initially responded on Twitter saying that it is just a security measure to protect items from theft and added that it changes from store to store.

Later, the supermarket chain apologised to Westgate, saying that it was an example of human error, and they should not have been tagged.

“It’s really important to us that Tesco is a place where everyone feels welcome, and the tags have now been removed,” a spokesman told The Sun.

In the UK, the cost of living crisis has forced supermarkets to place extra security on various products. Last month, blocks of cheese were snapped being protected from cash-strapped customers in the country.

The move came after a spike in first-time shoplifters stealing daily essentials.

A Walmart store in the US was criticised last year for placing security tags on darker shades of concealer.