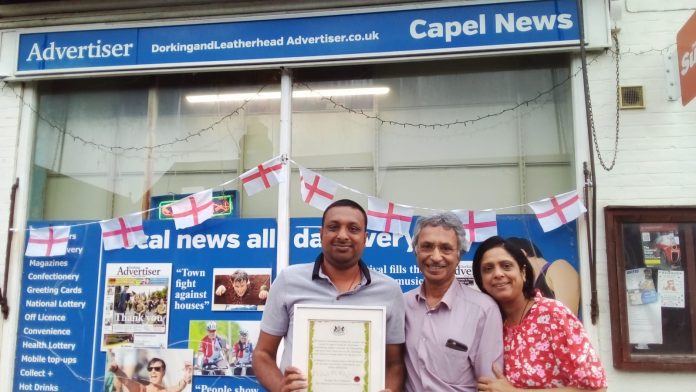 RETAILER Mukesh Patel, who has been honoured with Her Majesty’s Lord Lieutenant of Surrey Certificate over the Platinum Jubilee weekend, has dedicated his award to fellow residents of Capel village in Surrey.

Patel is given the recognition for his service to the village during Covid-19 pandemic. He kept his grocery shop open every day, delivering essentials and newspapers to every residents even during the pandemic peak, sometimes putting his own safety at risk.

Patel has been running Capel News General Store in the village in Surrey for the last 36 years.

While speaking to Asian Trader, Patel revealed how was in complete oblivion about any award-related announcements until he was given the recognition certificate during a Platinum Jubilee celebration event held in the village on Sunday (5).

“It was the Queen’s Tea Party event organised to mark the Platinum Jubilee. Our local councilor, who is also my regular customer, dropped by the shop in the morning and said he is looking forward to seeing me at the event. The event was from one to five in the evening and I was planning to attend it anyway after finishing with my local deliveries.

“Then suddenly, two hours later, I got a call asking if I would ‘make sure’ to be there at about two o’clock. I agreed but still thought they might want me there to judge a children’s event or something like that.

“When Deputy Lieutenant of Surrey Lord Roger Hood announced my wife’s (Tara Patel) and my name, I could not believe what was happening,”

“For my small village shop, to get Her Majesty’s recognition is like walking on air for me. I dedicate this award to my local customers who made the shop what it is, for 36 years,” he said.

Capel News General Store is one of the few stores in the village catering to the needs of more than 3,000 residents. Recalling the pandemic days, Patel further revealed how during that time, he never missed a single day of grocery delivery.

Many of his customers are elderly residents who in turn were left alone and secluded during the lockdown days.

“Some customers are quite vulnerable here. They could not come out of their houses and go to supermarkets. A couple of times I had to make emergency calls as I found them collapsed on the floor during my delivery run,” he said.

Running the shop during Covid-19 lockdown was not an easy task for Patel. He had to tackle shortage issues from initial lockdown days due to which he had to make multiple visits to multiple wholesalers to make sure to procure everything that the residents might need.

“Earlier, I used to visit the cash and carries weekly but during those days, we used to go there three-four times a week to get whatever we could so that the store is completely stocked up. I had this urge to go over and beyond the call of my duty to help and service our community anyhow.”

Patel also revealed how not only Capel, but residents of nearby villages and towns also started visiting his store during that time since word soon spread that the store was always stocked up well.

“Many customers were coming from other villages when they heard about it. They appreciated what we were doing and a few even thanked me for looking after them during that period,” he said.

Touching upon the current ongoing cost of living crisis, Patel pointed out that his customers are cutting down on their spending though he is hopeful that time will improve soon.