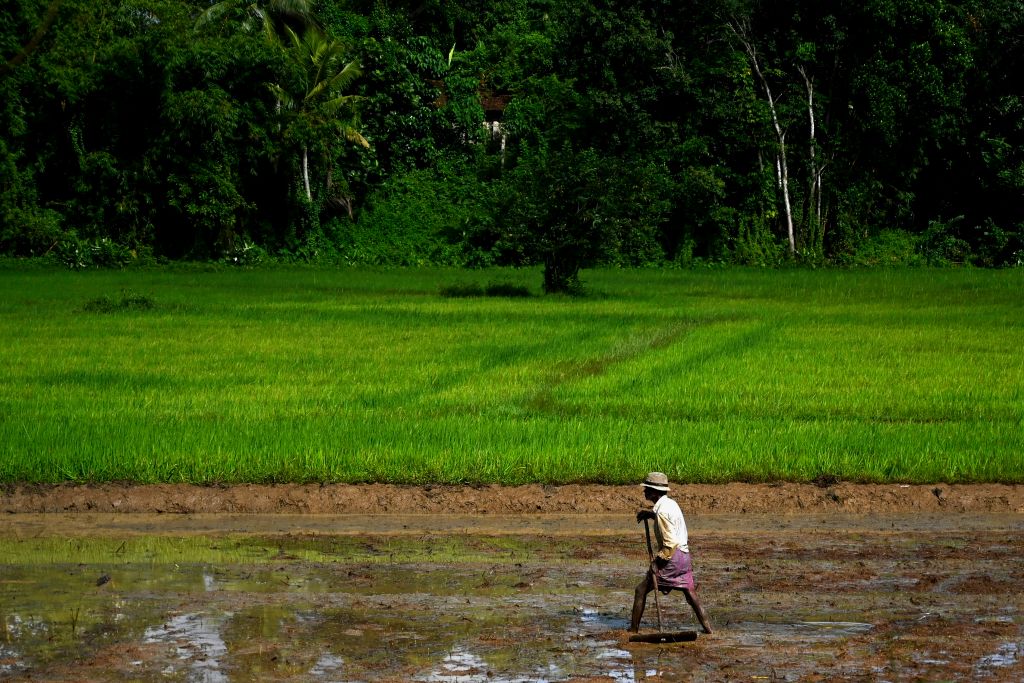 A farmer prepares a paddy field for sowing in Biyagama on the outskirts of Colombo on October 21, 2020. (Photo by ISHARA S. KODIKARA/AFP via Getty Images)

KNEE deep in mud and sprinkling rice seeds over two acres of land in Sri Lanka late last month, DM Rupasinghe said he was worried about his crop following a government decision to ban imports of chemical fertilisers.

The ban on chemical fertilisers, as well as pesticides and herbicides, was introduced by president Gotabaya Rajapaksa’s government in May for environmental reasons but it has plunged the sector into a crisis.

Rupasinghe, 57, said the government had told farmers to switch to organic farming but he said that was difficult and expensive. Instead, many farmers were just planting less rather than risking investing the resources in planting when they weren’t sure of the outcome.

“The government should have talked to farmers before introducing this policy,” Rupasinghe said. “Organic is harder, more labour intensive and more expensive. Everyone is so confused.”

“So we decided to plant a small quantity of seed paddy and wait,” he said.

That reduced planting is being repeated across the island and could bring down Sri Lanka’s annual paddy yield by about 40 per cent, according to a prominent agricultural economist and a farmers’ association.

Normally some two million Sri Lankan farmers cultivate about 700,000 hectares of paddy between October and March. Nearly two-thirds of the country’s 22 million people are dependent on agriculture, which accounts for seven per cent of its $80 billion (£59 bn) gross domestic product (GDP).

Jeevika Weerahewa, an agricultural economist at Sri Lanka’s Peradeniya University, said paddy output could fall by as much as 43 per cent but it was not just paddy that would be hit by the ban.

“It will affect key exports like rubber, coconut and tea exports, with the latter expected to reduce 40 per cent,” Weerahewa said.

“The worst impact will be on the poor.”

The government has said the ban was part of efforts to promote healthier agricultural practices and make farming more sustainable.

“The challenge facing us now is to use modern scientific techniques and practices to enhance agricultural production without causing environmental degradation,” Rajapaksa said at the COP26 UN climate conference this month.

Farmers have staged protest marches and burnt effigies of the agriculture minister, calling for a resumption of chemical fertiliser imports.

In response, the government has imported limited amounts of potassium chloride and liquid nano nitrogen bottles – both used during the rice-growing season – from India since October.

Namal Karunaratne of the All Ceylon Farmers Federation, the country’s largest farmers group that is associated with an opposition party, said the government had failed to provide an alternative to chemical fertilisers.

“Many farmers have decided not to cultivate paddy fearing financial losses,” Karunaratne said.

Agriculture secretary Udith K Jayasinghe said the government would compensate farmers for any crop losses, despite a ballooning budget deficit.

“Plans are being made to purchase the harvest at higher prices, thereby eliminating any negative impact the farmers may face,” he said.

In a letter to Rajapakse earlier in the year, the Sri Lanka Agricultural Economics Association said a reduction in average agricultural productivity by 20 per cent could cause a 3.05 per cent decrease in GDP.

Mohideen Ismail, chairman of the Kadayanthalawa Farmers Association in the major paddy-growing district of Ampara, said that farmers were not against a switch to organic fertilisers.

“But they are worried it is happening too quickly, without inputs and proper awareness,” he told Reuters. “This policy should have been implemented across multiple seasons.”

Siddhant Chaturvedi: outsiders take way longer to make their presence felt in the…

Ajay Devgn and Rohit Shetty to reteam for Singham 3; the film expected…

Sooryavanshi: Akshay Kumar starrer off to a great start in India and overseas