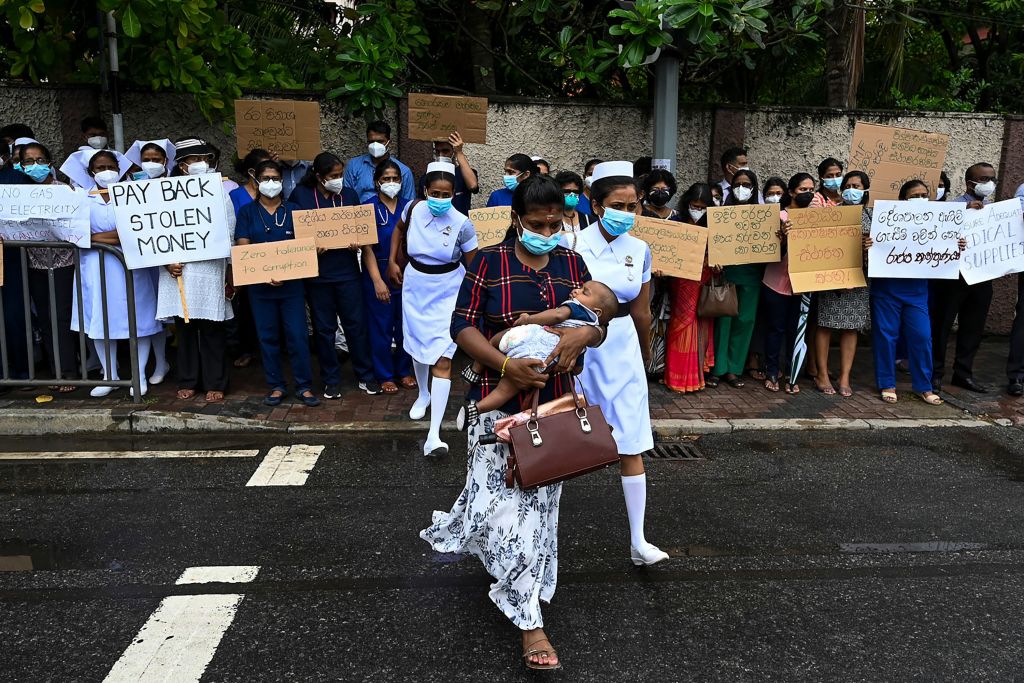 Doctors and nurses of the Lady Ridgeway Children’s hospital hold placards during a silent demonstration against shortages of medicines in Colombo on April 19, 2022. (Photo by ISHARA S. KODIKARA/AFP via Getty Images)

A delegation headed by Sri Lanka’s finance minister Ali Sabry kicked off formal talks with the IMF in Washington on Monday (18) for a programme the government hopes will help top up its reserves and attract bridge financing to pay for essential imports of fuel, food and medicines.

Shamir Zavahir, an aide to Sabry, said on Twitter that Sri Lanka asked for a loan under the rapid financial instrument (RFI) window, meant for countries needing urgent balance-of-payment support. But the global lender was initially not inclined to grant the request, he said.

“The IMF has subsequently informed Minister Sabry that India had also made representations on behalf of Sri Lanka for an RFI,” Sri Lanka’s finance ministry said in a statement.

“It had been communicated that the IMF will consider the special request made despite it being outside of the standard circumstances for the issuance of an RFI.”

Sri Lanka’s sovereign dollar-denominated bonds came under pressure again on Tuesday, with longer-dated issues falling as much as 1.4 cents in the dollar to trade at deeply distressed levels of just over 40 cents, Tradeweb data showed.

The country’s devastating financial crisis has come as the effects of Covid-19 exacerbated mismanaged government finances and as rising prices of fuel sapped foreign reserves. Fuel, power, food and medicines have been running low for weeks.

Street protests have erupted against president Gotabaya Rajapaksa and his brother, prime minister Mahinda Rajapaksa, in the island nation of 22 million people.

Sri Lanka is seeking $3 billion (£2.31 bn) in the coming months from multiple sources including the IMF, the World Bank and India to stave off the crisis, Sabry said earlier this month.

Both India and China have already extended billions of dollars in financial support to Sri Lanka. Sabry met his Indian counterpart Nirmala Sitharaman on the sidelines of the IMF deliberations, and both sides said they agreed to deepen their cooperation.

“India will fully support the deliberations of Sri Lanka with the IMF, especially on the special request made for expediting an extended fund facility,” Sabry’s office said, citing his meeting with Sitharaman.

Sources said India would keep helping out its neighbour as it tries to regain influence lost to China in recent years. Beijing is one of Sri Lanka’s biggest lenders and has also built ports and roads there.

Last week, Sri Lanka’s central bank said it was suspending repayment on some of its foreign debt pending a restructure.

In the commercial capital Colombo, protests demanding the ouster of the Rajapaksas have dragged on for more than a week.

In parliament, the prime minister reiterated a call for a unity government that the opposition has rejected.

In a bid to quell the protests and demands for their resignation, the Rajapaksa brothers have also offered to reduce the executive powers of the president by amending the constitution.

“Together with the support of the president, we will move towards broad constitutional reforms,” said Mahinda Rajapaksa, a former president himself.

“We request for support from the public, the opposition and all other stakeholders.”

A severe fuel shortage sparked fresh protests across Sri Lanka on Tuesday (19), with tens of thousands of angry motorists burning tyres and blocking a major road leading into the capital, police and local officials said.

The latest demonstrations saw a 115 kilometre (71 miles) highway connecting the central city of Kandy to capital Colombo cut off at multiple stretches as fuel stations across the country ran out of petrol and diesel.

Main oil retailer Ceylon Petroleum Corporation raised prices by up to 64.2 per cent on Tuesday and lifted a rationing system limiting how much fuel individuals could buy that had been implemented last week.

Lanka IOC, a petrol retailer which accounts for a third of the local market, had already raised its prices by up to 35 per cent on Monday (18).

The motorists joined throngs of protesters in Colombo who have been calling for Rajapaksa to step down for 11 straight days.

Doctors at the country’s main children’s hospital also began demonstrating on Tuesday over a serious shortage of medicines and equipment.

In a bid to address growing calls for his entire government to resign, Rajapaksa on Monday appointed a new cabinet that excluded two of his brothers and a nephew – who had held key posts in the previous setup – and acknowledged public anger over the ruling family’s mismanagement.

“People are suffering because of the economic crisis and I deeply regret it,” the president said in an address to his new cabinet on Monday, conceding Sri Lanka should have begun bailout talks with the IMF “much earlier”.

Dozens of Rajapaksa’s lawmakers have turned against the administration and on Tuesday took seats on opposition benches in parliament.