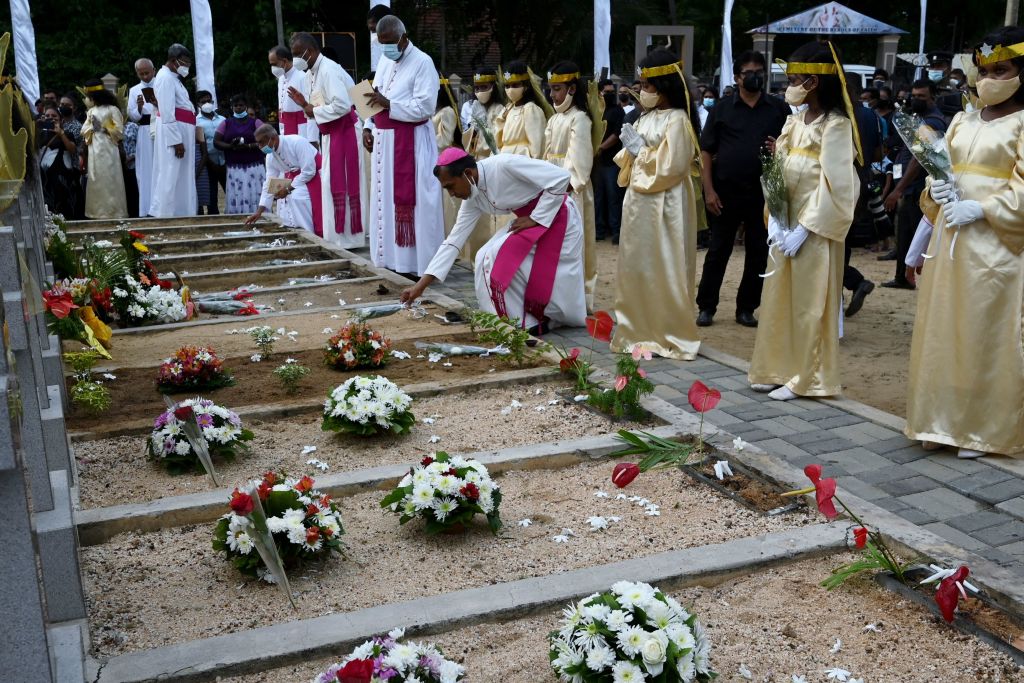 Catholic priests pay their respect at a graveyard for St. Sebastian’s Church bomb blasts victims in Negombo on April 21, 2021, marking the second anniversary of the 2019 Easter Sunday attacks that killed 279 people at three churches and hotels. (Photo by LAKRUWAN WANNIARACHCHI/AFP via Getty Images)

SRI Lankan prosecutors have indicted the alleged mastermind of the 2019 Easter Sunday suicide bombings along with 24 men they say were co-conspirators in the island’s worst single terror attack.

Some 279 people including dozens of foreign nationals were killed in the April 21 attacks on three churches and three luxury hotels, in a wave of killings targeting Sri Lanka’s Christian community.

Prosecutors have brought over 20,000 charges against the suspects, three of whom have already been accused of terrorism by the US Justice Department.

The suspects are in police custody, but one of them did not appear in court Monday (4) as he was suffering from Covid-19, officials said, adding that hearings will begin on November 23.

Prosecutors told the court that US and Australian forensic experts assisted investigators in tracking down the backers of the eight-member suicide squad responsible for the attacks.

Sri Lanka authorities have accused their ringleader, Mohamed Naufar, of being the mastermind of the deadly suicide bombings and of being a member of the Daesh group.

An inquiry set up by former president Maithripala Sirisena found that he too was responsible for failing to prevent the attack and should be prosecuted.

The head of the Catholic church in Sri Lanka, Cardinal Malcolm Ranjith, has repeatedly said he is unhappy with the lack of progress in the inquiry into the Easter bombings.