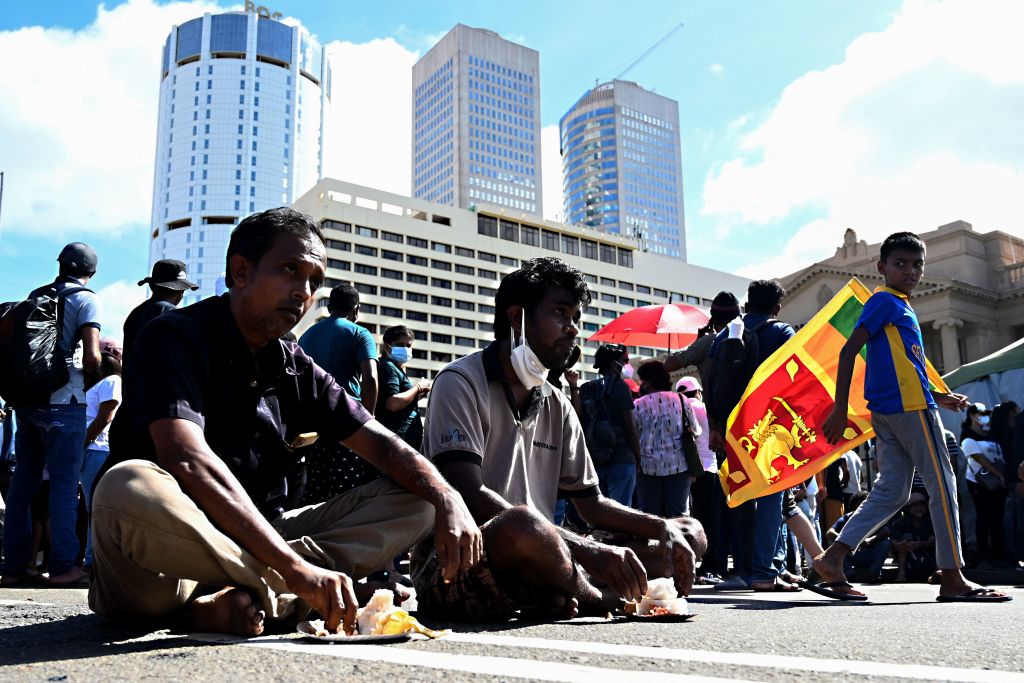 Protesters, gathered at the entrance of Sri Lankan President Gotabaya Rajapaksa’s office, eat while sitting along a road, in Colombo on April 14, 2022, during the Sinhala and Tamil New Year. Severe shortages of food and fuel, alongside lengthy electricity blackouts, have led to weeks of widespread anti-government demonstrations. (Photo by ISHARA S. KODIKARA/AFP via Getty Images)

S&P GLOBAL RATINGS said Wednesday (13) it could take months for Sri Lanka to restructure its foreign debt, a day after the country announced it would default on the $51 billion (£38.87 bn) it has borrowed.

It said it would likely assign Sri Lanka a “selective default” foreign currency rating after getting confirmation it misses the payment on interest coupons due on April 18.

S&P said it expected Sri Lanka would miss these payments and in the meantime, it lowered Sri Lanka’s foreign currency sovereign rating to “CC”, which means highly vulnerable to default.

Sri Lanka announced Tuesday (12) a default on its foreign debt as the island nation grapples with its worst economic crisis in memory and escalating protests demanding the government’s resignation.

Acute food and fuel shortages, as well as long daily electricity blackouts, have brought widespread suffering to the country’s 22 million people in its most painful downturn since independence in 1948.

The government has struggled to service foreign loans and Tuesday’s decision comes ahead of negotiations for an International Monetary Fund bailout aimed at preventing a more catastrophic hard default that would see Sri Lanka completely repudiate its debts.

S&P said Sri Lanka was unlikely to be able to carry out a quick debt restructuring.

“Sri Lanka’s debt restructuring process is likely to be complicated and may take months to complete,” the ratings agency said.

“Negotiations with the IMF to establish a reform and funding programme are in the early stages,” it added.