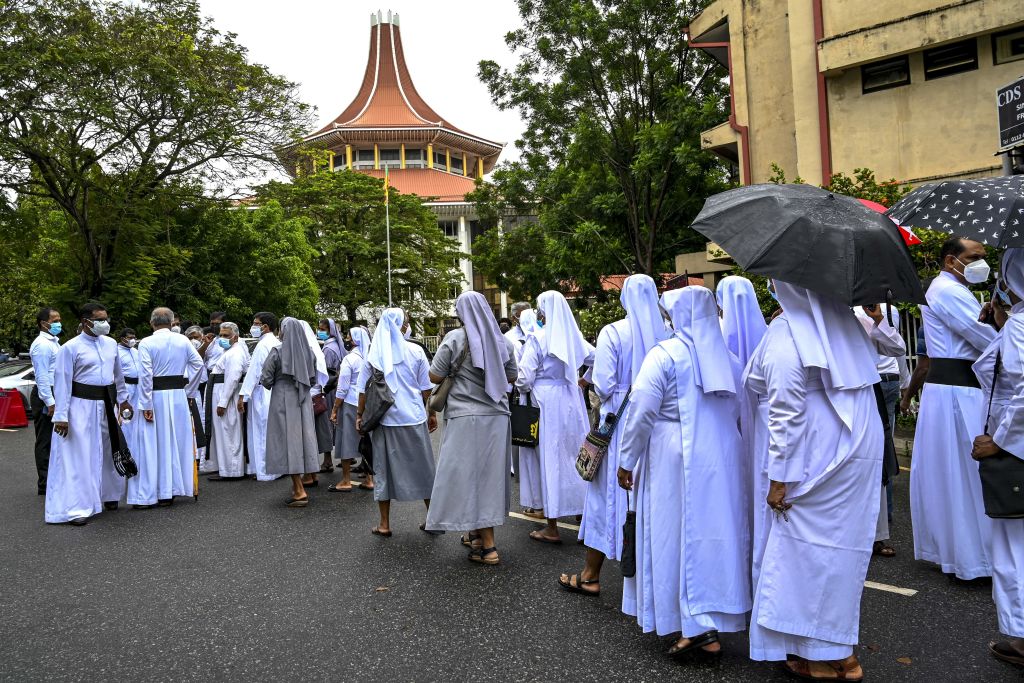 Catholic priests and nuns stage a silent protest outside the Sri Lanka’s Supreme Court complex in Colombo on November 8, 2021, denouncing alleged attempts by the police to arrest a senior priest who is pressing for justice for those responsible for the 2019 Easter Sunday bombings. (Photo by ISHARA S. KODIKARA/AFP via Getty Images)

A SRI Lankan court on Tuesday (23) began the trial of 25 men accused of plotting the Easter Sunday bombings that killed nearly 270 people in 2019, as lawyers warned of a protracted and complicated legal battle ahead.

The suspects were brought under heavy guard in batches from different prisons by police to the Colombo High Court during the morning hours.

Police have filed more than 23,000 charges against the suspects, including conspiring to murder, aiding and abetting the attacks, and collecting arms and ammunition.

Lawyers representing the suspects said the charges were too numerous in number and the case could take as long as a decade to conclude.

“As things are now it is impossible to identify which specific charges match with which suspect. We are hoping there will be more clarity on this. We are concerned that this case will drag on and it will be a futile exercise,” Attorney Noordeen M Shaheed, who represents six of the suspects, said.

The group includes Mohammad Naufer, who officials say masterminded the attack and is linked to Daesh (Islamic State). He was escorted by armed police to the court with his face covered by a piece of cloth.

Another key suspect is YM Ibrahim, the father of two of the suicide bombers, Inshaf and Illham Ibrahim, who targeted two hotels in Colombo.

Lawyers for Naufer and Ibrahim could not be immediately reached for comment.

The Catholic community is keeping a close eye on the trial, said lawyer Neville Abeyratne who is representing the head of Sri Lanka’s Catholic Church Cardinal Malcolm Ranjith.

“We are monitoring this trial in the hope that when it ends we can bring civil action asking for compensation for those who were killed and injured,” he said.

Trials of two Sri Lankan officials accused of failing to prevent the attacks began on Monday (22).

In this trial, former national police chief Pujith Jayasundara is charged with failing to act on repeated intelligence warnings of a possible terror attack.

A total of 855 charges of murder and attempted murder were read out as Jayasundara stood in the dock at the back of the courtroom. A total of 1,215 witnesses have been listed to give evidence but not all may be called, his lawyer said.

“Our position is the former police chief is not guilty. He did not intentionally aid or abet the attacks and there was no omission on his part that caused the attacks,” attorney Roshan Dehiwala said.

Former defence secretary Hemasiri Fernando, the top official in the defence ministry at the time, faces similar charges in a trial that also began on Monday. Neither he nor his lawyer could be reached for comment.

Both men are out on bail.

Last Sunday (21), dozens of Catholic community members held protests and laid flowers at multiple events organised to remember those lost in the attacks.

Participants appealed to the government to support survivors and ensure the trials are allowed to proceed without political interference.

“We want genuine justice from this process. That is what we are appealing for the officials to deliver. We have been waiting a long time and we want the real people responsible held accountable for what happened,” said Eranga Gunasekera, a member of a victims support group, during a remembrance ceremony held in Colombo.