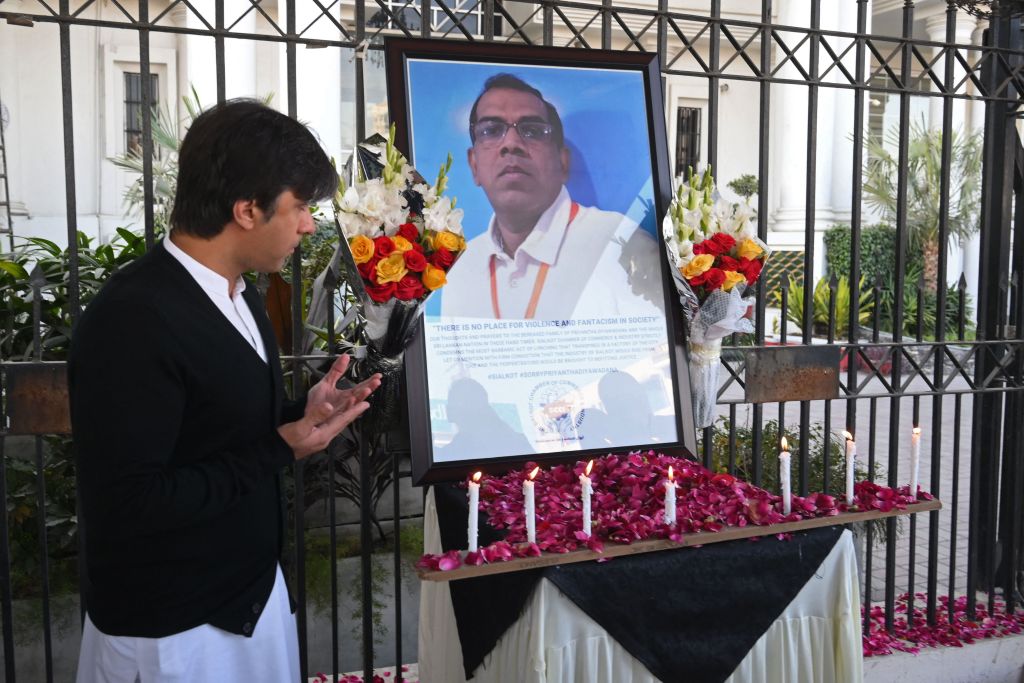 A Pakistani industrialist pays tribute beside a photograph of late Sri Lankan factory manager, in Sialkot on December 4, 2021, after he was beaten to death and set ablaze by a mob who accused him of blasphemy, officials said on December 4. (Photo by ARIF ALI/AFP via Getty Images)

A PAKISTAN court Monday (18) sentenced six men to death and dozens more to jail for the brutal mob slaying of a Sri Lankan factory manager accused of blasphemy.

The vigilante attack in Sialkot last December 3 caused outrage, with then prime minister Imran Khan calling it a “day of shame for Pakistan”.

Few issues are as galvanising in Pakistan as blasphemy, and even the slightest suggestion of an insult to Islam can supercharge protests and incite lynchings.

On Monday, prosecutors said 88 of 89 people on trial for the murder of Priyantha Diyawadana had been convicted, with six sentenced to death, nine to life in prison and the rest jail terms ranging from two to five years.

“The prosecution team worked very hard to present its case to the court and to reach this judgement,” Abdul Rauf Wattoo, the lead public prosecutor, said.

“We are satisfied with the outcome.”

The trial was overseen by a special anti-terror court, established to speed up justice in high profile cases that can otherwise spend years being processed.

At the time of the killing, local police officials said rumours spread that Diyawadana had torn down a religious poster and thrown it into the dustbin.

Many in the mob made no attempt to hide their identity and some took selfies in front of the burning corpse.

Hafiz Israr ul Haq, the lawyer for one of the men sentenced to death, called the verdict “unfair”.

“This was a case of mob violence and in such cases, no individual’s role can be ascertained with certainty,” he said.

Rights groups say accusations of blasphemy can often be wielded to settle personal vendettas, with minorities largely the target.

In April 2017, an angry mob lynched university student Mashal Khan when he was accused of posting blasphemous content online.

A Christian couple was lynched and their remains burnt in a kiln in Punjab in 2014 after being falsely accused of desecrating the Koran.