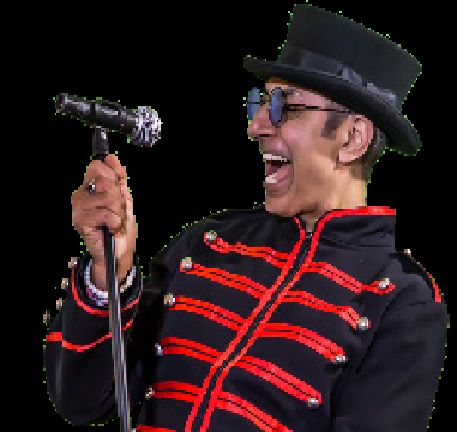 Many of those musical icons have come together for the brand new stage show The West End Bhangra Musical, which commences a UK tour this month and sees stunning live performances from musical acts that created history, as well as featuring emerging talent.

The colourful show is headlined by great musical icons Shin from DCS, Heera, Apna Sangeet and Silinder Pardesi, who are all accompanied by the acclaimed Legends Band.
This will be another exciting chapter in all their extraordinary stories, including that of super singer Shin from brilliant band DCS.

Eastern Eye caught up with Shin to speak about music, the new show, the future of bhangra and his extraordinary career.

You have had an amazing and long musical journey; what is keeping the passion alive?
I thank god every day for giving me a career that has never been like a job for me. I have loved singing for as long as I can remember and still do to this day. Singing and performing are my drugs of choice. I am as high as a kite when I’m on stage, and that’s what keeps the fire of passion blazing to this day.

Do you remember the first time you took to stage?
In 1981, I entered a Mohammed Rafi song competition and performed for the first time in front of a full house. I remember the adrenaline was flowing and when I heard the applause and appreciation of the crowd, I decided then and there that I was going to make singing my career. That day DCS was born.

You have inspired so many, but who inspired you in the early days?
My mother’s was the first face I remember seeing, and Rafi saab’s was the first voice I remember hearing. This man touched my soul from that young age and has gripped it ever since. Even today, nearly 40 years after his death, his voice mesmerises me and every time I hear one of his songs, I learn something new.

What has meant more to you – the hit songs or live performances?
Performing live with my band DCS has been the ultimate buzz for me. I am a band man through and through. I remember, in the early days sometimes we would turn up to a show and there would be a man and his dog standing in the auditorium waiting to hear us, and I would sing my heart out for him.

Which of your many live performances is closest to your heart?
I have worked in many genres of music apart from bhangra. I’ve done musical theatre, Indian classical, mainstream pop and Bollywood. I must say that one very special show I did was with the City Of Birmingham Symphony Orchestra (CBSO). It was a tribute to Rafi saab and his songs. Performing on stage with a 100-piece orchestra playing behind me was a dream of mine, as that is how the old great Bollywood songs were recorded back in those massive Mumbai recording studios. I have worked with the CBSO on many occasions now and absolutely love it every time.

What led to you getting involved with The West End Bhangra Musical?
I am an artist who likes to work outside of my comfort zone. I like to challenge myself, and this show will do that with the high standards it is setting. It was hard to say no to it.

What can we expect from the show?
This promises to be a show with a difference. Big production, lighting rigs, choreographed dances, costume changes and the music being played by some of the best musicians in the industry. I have been in the industry for nearly 40 years and I have never come across a bhangra show like this one.

How is it sharing the same platform as other legends?
It’s going to be a blast. As well as being legends in their own rights, the singers and band are all good friends of mine and we have all shared a lot of stage time together over the years.

Did you all ever have rivalry during the golden age of bands?
(Laughs). Oh, yes. But it was all healthy and well-intentioned. On stage, the bands were trying to outdo one another with their performances, but backstage, we were sharing green room space and pranking around together and having fun.

Tell us, do you get nervous before going on stage?
I’m sure I must have been nervous in the early days a few times, it’s normal, I suppose. But I cannot consciously remember ever being affected by nerves when about to perform. I think confidence in your ability kills the nerves.

What is the secret of a great performance?
Rehearsal, rehearsal, rehearsal. As a band and as an individual musician and singer, one should be so well prepared before stepping on to the stage that there is no room for errors. That is why DCS was crowned the best live band on countless occasions over the years.

What has been your most memorable encounter with the audience?
I remember once DCS was performing in Singapore and our song Ah Chack Bothal Daru Dhi produced by DJ Vix had just come out. While performing this song the band stops in the middle and pauses for a moment for musical effect. At that point, the crowd just started to sing back to us at the top of their voices, and it didn’t stop until I intervened after a couple of minutes. That was one of those magical moments I’ll never forget.

Does it sadden you that there are so few bands today?
Yes, it does. The bands bring a different energy to a show, and live music is about the artistry and musicianship of the band as well as the songs. If live music dies out in the UK bhangra scene, that day will be a day of mourning.

What do you see as the future of British bhangra?
British bhangra is at its lowest point ever. The scene has virtually disappeared. There are hardly any shows going on and no exciting new artists on the horizon that I’ve heard about. This has been the country to start up new trends, so, come on, people out there.

What key advice would you give to the new generation?
In the UK, we need to encourage new talent to step up to the mark. It’s not all about being a DJ or being a dhol player, which is easy to do and there are so many of them. We need kids to learn instruments, sing in Punjabi and produce music. Record companies need to re-start A&R departments where they used to nurture and encourage talent.

What inspires you as an artist?
People tell me that they want to hear more new music from DCS because there is nothing happening out there apart from the Indian takeover of the scene, which is just one big recycling job most of the time. So I find that encouragement from people very inspiring.

You did really well with acting on stage; is that something you will pursue in the future?
Oh, yes. I have been involved with a few musical theatre projects now, and enjoy the genre very much, indeed. My bhangra commitments do not allow me that much time to dedicate to it, but I look forward to working with the people at Rifco Arts as they are the leaders of the South Asian musical theatre genre.

Looking back, would you have done anything differently?
As I said earlier, I thank god every day for giving me a career in music. It has been a great journey so far with no regrets, and I would not change anything that has happened along the way.

Why should we come to The West End Bhangra musical?
For people who love and grew up with the music of the golden era of British bhangra, and want to see the people who made the genre so popular all over the world, performing live, like they have never been seen before, then come to the show or you will regret it for the rest of your lives.

Why do you love music?
I am a devotee of music as an art form. I love what music does to people when they hear something that they connect with, whether it’s a stadium full of people singing along to their favourite band together, or one man sitting in his bedroom pining for a loved one. Everyone gets their own hit and the effect is very physical, chemical, emotional, moving and spiritual. This art form has so many levels to it, but it has no barriers and the frontiers are there to be explored. And I am still exploring.