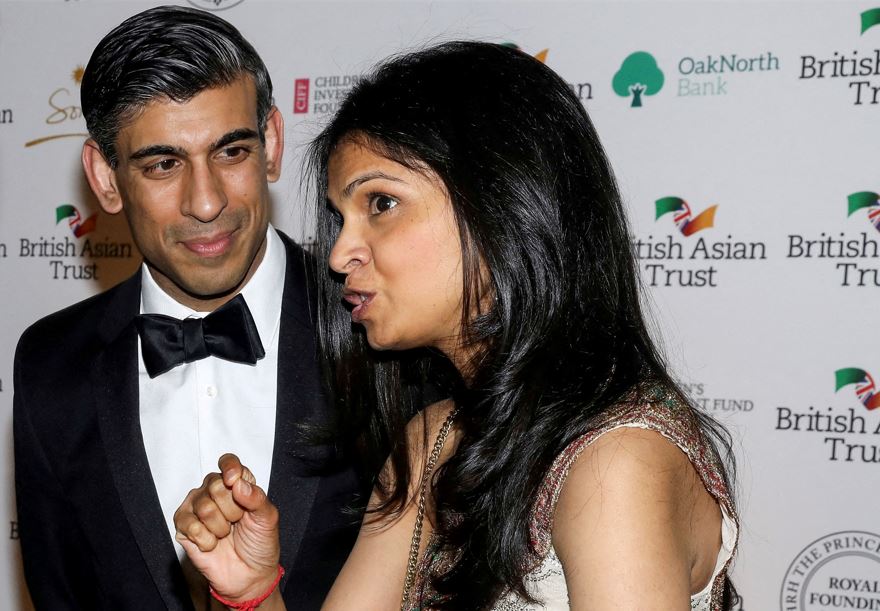 Sunak was also criticised for a lack of transparency, after he admitted to holding a “Green Card” for US permanent residents until last year.

Sunak’s wealthy wife Akshata Murty said she would start paying UK tax on “all worldwide income”, in a bid to defuse a controversy that has further imperilled his waning political fortunes.

But Labour frontbench MP Louise Haigh told BBC radio that Sunak had “come out on a number of occasions to try and muddy the waters” around his family’s tax affairs.

She conceded that the “non-domicile” status enjoyed by Murty — shielding the overseas income from her family’s company Infosys against UK taxes — was legal.

But Haigh queried “whether it was right that the chancellor of the exchequer, whilst piling on 15 separate tax rises to the British public, was benefiting from a tax scheme that allowed his household to pay significantly less to the tune of potentially tens of millions of pounds.”

The Independent newspaper reported that Sunak was listed as the beneficiary of trusts set up in the British Virgin Islands and Cayman Islands to help manage his wife’s tax and business affairs.

Sunak was listed in 2020, after he became chancellor and after a prior stint as chief secretary to the Treasury, the newspaper said.

“No-one in Akshata’s family is aware of this alleged trust,” a spokeswoman close to the Sunak family said in response.

As chancellor, Sunak oversaw a huge programme of government spending during the coronavirus pandemic, but is now tightening the belt just as Britons face the worst cost-of-living crisis in generations.

Once a leading contender to succeed prime minister Boris Johnson, Sunak has seen his popularity plummet in recent weeks as a result, and has accused critics of mounting a “smear” campaign against his wife.

Allies of the finance minister have told newspapers that Johnson’s office is waging a political hit job.

Johnson on Friday (8) denied knowledge of any briefing operation against Sunak, and told reporters that his chancellor was doing an “absolutely outstanding job”.

The White House meanwhile declined to comment about Sunak’s Green Card, which the minister said he only gave up ahead of his first visit to the US as chancellor in October last year.

Under US law, possession of the card meant that Sunak intended to live in America and pay US taxes, despite serving as Britain’s second-most powerful politician.

Sunak and Murty met as students in the US and they married in 2009. She is the daughter of Indian billionaire N R Narayana Murthy, co-founder of the IT giant Infosys.