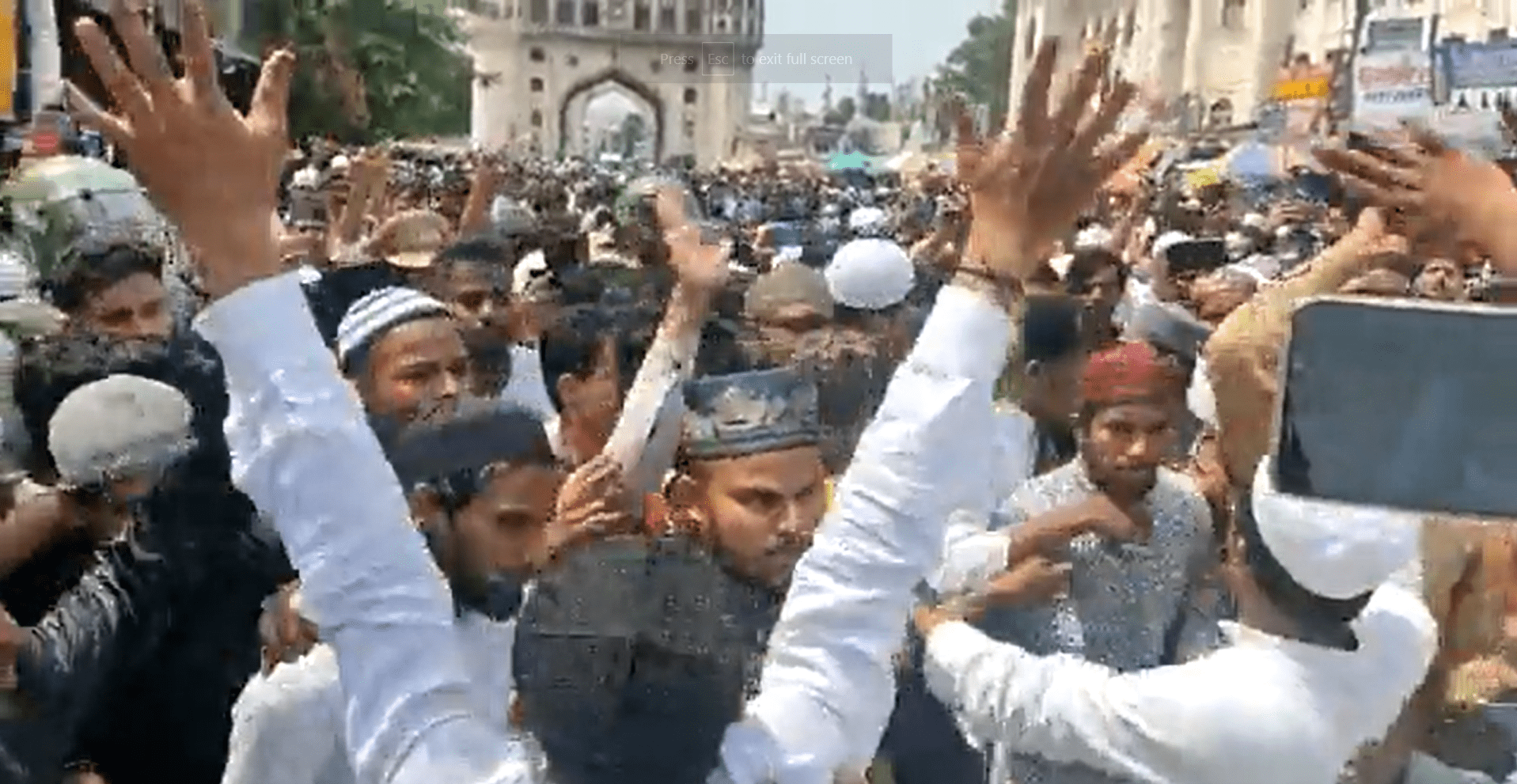 Protests broke out in some states on Friday including outside Delhi’s Jama Masjid over the controversial remarks on Prophet Mohammad by two now-suspended BJP functionaries with demonstrators in Jharkhand injuring a few policemen while authorities in Jammu imposed a curfew in a few areas and parts of Kashmir observed a shutdown.

In Delhi, the protesters massed outside the historic Jama Masjid after the Friday prayers demanding the arrest of suspended BJP spokesperson Nupur Sharma.

Some of the people, who gathered on the steps of the mosque, carried placards and shouted slogans against Sharma and Naveen Jindal, former head of the Delhi BJP’s media unit.

Senior police officials said the protest was held peacefully and lasted for 15 to 20 minutes. The protesters were later dispersed from the area.

Some policemen were injured while trying to control demonstrators near Hanuman Temple situated on Ranchi’s Main Road. Police fired in air and resorted to baton charge to control the protesters who spilled out on the road after the Friday prayers and pelted stones and shouted slogans.

Police officials said the protests were continuing since morning and picked up tempo post-Friday prayers. Many shops and establishments kept their shutters down in protest against the controversial remarks.

Tension mounted in Jammu’s Bhaderwah and some areas of Kishtwar prompting authorities to impose curfew while parts of Kashmir observed a shutdown.

Internet services were snapped in the Bhaderwah and Kishtwar towns and Srinagar city of Kashmir as a precautionary measure. Mobile Internet was also suspended in parts of Kashmir, officials said.

Sporadic incidents of stone-pelting were reported in Bhaderwah town. Some people, violating restrictions, came out on the streets and threw stones at security forces while raising slogans.

In Srinagar, protests were held at Lal Chowk, Batamaloo, Tengpora, and other places with the demonstrators holding placards.

Protests also broke out at several places in Uttar Pradesh with sloganeering taking place in Saharanpur, Moradabad, Rampur, and Lucknow.

In the Atala area of Prayagraj, people raised slogans and pelted stones after the Friday prayers ended.

Members of the Muslim community staged protests in several cities of Maharashtra though no untoward incident was reported from anywhere.

In Panvel city in neighbouring Navi Mumbai, at least 3,000 protesters including around 1,000 women took out a protest march, seeking the arrest of Sharma and Jindal.

A delegation submitted a memorandum to Panvel tehsildar and the protest was over peacefully by 4 pm, said a local police official.

A protest was also held at Shivaji Chowk in Vashi, where a delegation submitted their demands to the Vashi Police Station. Similar protest gatherings or marches were held in Thane, Aurangabad, Solapur, Nandurbar, Parbhani, Beed, Latur, Bhandara, Chandrapur, and Pune districts.

Meanwhile, a complaint was filed at a court in Muzaffarpur in Bihar against Sharma, Jindal, and religious leader Swami Yati Narsinghanand by a social activist against their inflammatory statements.

The BJP on Sunday suspended Sharma and Jindal for their derogatory comments on the Prophet after they stoked a furore including in the Arab world.