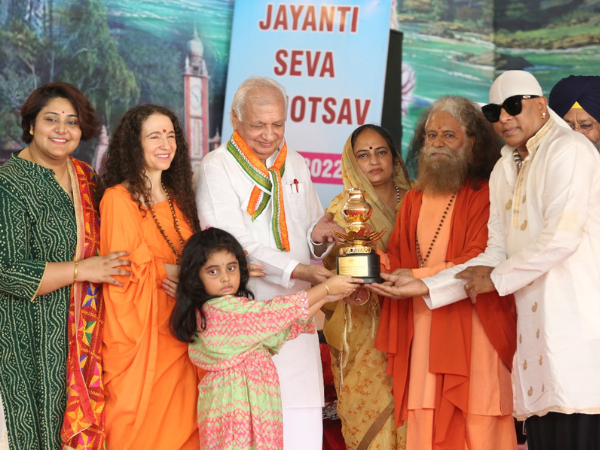 A NUMBER of distinguished guests came together at the Parmarth Niketan Ashram in Rishikesh in the northern Indian state if Uttarakhand on Tuesday (7) – the fifth day of the week-long celebrations that are underway in the honour of the 70th birth anniversary of His Holiness (HH) Pujya Swami Chidanand Saraswati and the 50th birth anniversary of Pujya Sadhvi Bhagawati Saraswati where they took a special pledge to protect and promote women’s rights.

The celebrations on Day 5 of the Seva celebrations were dedicated to gender equality, women’s rights and ending violence against women and child marriage.

The guests joined HH Pujya Swamiji and Pujya Sadhviji on the stage and gave speeches. Thereafter, they took a pledge to end all violence against women and guarantee their human rights of safety and reproductive health. They also encouraged the audience to do the same.

After the pledge, a special roundtable was held in which the leaders of faith were joined by religious scholars to work out a toolkit – a partnership between Global Interfaith WASH Alliance (GIWA), Divine Shakti Foundation (DSF), Parmarth Niketan and UNFPA (the United Nations Population Fund) — to end gender violence in India.

HH Puja Swamiji and governor Khan gave Special Ganga Awards to the faith leaders and Sivamani for their work on sharing and spreading peace and uplifting human rights in society.

Speaking on the occasion, Khan said, “Problems are a part of our life, but to deal with problems, we should take lessons from our cultural heritage, knowledge and past experiences. India is a country where knowledge is worshiped as Saraswati, wealth is worshiped as Lakshmi and energy is worshiped as Shakti and all these are feminine but we have tragically misinterpreted our culture.”

He also said that puja (worship) is not merely what we do in our temples but rather when we apply the divine teachings and the divine example of God in our lives and make our actions.

He added that a child’s first teacher is its mother and the mother’s lap is its first school. He gave the example of Mahatma Gandhiji who got the idea of Satyagraha from his wife — Kasturba Gandhi — Baa, which eventually led to a historic movement for India’s Independence.

HH Pujya Swamiji emphasized that the philosophy of India’s culture of worshiping and celebrating women can be found even in the Rama Katha, as we are now seeing Janaki Kathas as well. He said there should be Janaki kathas along with Shri Rama Kathas across the country. He also explained that our ‘nari shakti’ (women power) are the foundation of our culture.  They are the ones providing true nourishment of ‘sanskaras’ (culture) in our homes, families and societies.

He also emphasized that it is due to women giving physical birth and also spiritual inspiration that we have saints like Swami Vivekananda ji, Adi Guru Shankaracharya ji, Swami Nimbarkacharya ji and others.

Giani Ranjit Singh shared a historical story in the context of Raj Mata who was a foeticide survivor and later gave birth to Maharaja Ranjit Singh, who established the Sikh State and became the greatest ruler in the history of Punjab. He shared a quote from Gurugranth Sahib ji “So kyon manda aakhiye jit jamme rajan” (Why call her a curse? From her Kings are born).

He said a woman has four forms: loving daughter, loving sister, devoted wife, and mother who nurtures motherhood, and that we must appreciate women in all of her forms and all of her roles.

“When we refer to the divine, we always put the name of Shakti first. We say – Sita-Ram, Lakshmi-Narayan, Radha Krishna. We also always pray to the Goddess – we say “Ganga Maiya ki jai! Gau Mata ki jai! Bharat Mata ki jai!” So we worship the feminine but tragically that respect is not extended into our own societies and our own homes. Tragically, almost one out of three women i.e., 30 per cent of women are victims of violence in their own home and far too many young girls are getting married off when they are still children. This is also violence,” she said.

She shared about the work of GIWA and DSF with the UNFPA to create a toolkit to end this violence and discrimination.