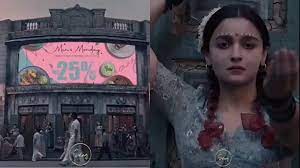 An advertisement for Pakistani restaurant Swing has landed in soup and is receiving backlash from all around. The restaurant used a scene from Sanjay Leela Bhansali’s Bollywood film Gangubai Kathiawadi, in which Alia Bhatt, who played a sex worker in the period drama, is seen approaching men on the streets of Mumbai, to advertise a special ‘Men’s Monday’ deal.

Alia Bhatt portrayed a sex worker who worked her way up to become a powerful brothel owner in the Sanjay Leela Bhansali-directed movie. She was seen waiting outside a building for customers in one moving moment from the movie.

“Aja na Raja – what are you waiting for? Swings is calling out all the Rajas out there. Ajao and avail a 25% discount on Men’s Monday at Swings! the restaurant wrote on Instagram.

However, the advertisement did not go down well with viewers and they took to the comment section to express their displeasure.

Later, the restaurant responded to the backlash saying the ad was not meant to hurt sentiments. “Why are you taking this to heart? If a movie does this, it is fine. If a restaurant does it, it’s a sin?”

They captioned the post as, “Just a concept. We didn’t mean to hurt the sentiments of anyone. The movie and this post is based on a concept. Like before, we’re open to all and will be serving you with the same love like we always have.”