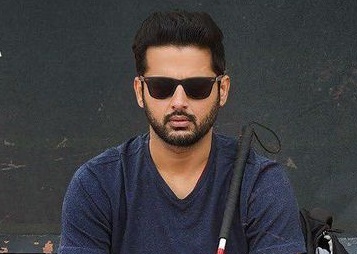 The much-awaited Telugu-language black comedy crime thriller film Maestro (2021) is finally out. A remake of Bollywood hit Andhadhun (2018), Maestro has been directed by Merlapaka Gandhi and produced by Shresht Movies. The film premiered on September 17 on streaming media platform Disney+ Hotstar.

South actor Nithiin, who plays the lead role in the film, says that he considers Maestro a step forward in exploring diverse stories. The popular actor steps into the shoes of actor Ayushmann Khurrana’s character of a blind piano player who unwittingly becomes embroiled in a murder.

In an interview with a newswire, Nithiin said that venturing into the genre of black comedy-thriller with Maestro is his attempt to try something new as an artiste. “When I was thinking of doing this film, I was in two minds if I should do it or not, because I was happy in my space. I was doing commercials, masala films, love stories… But somewhere as an actor I wanted to push myself to reach a large audience and play a different role. This is my step towards doing different content and pushing myself as an actor,” he said.

Maestro also stars Tamannaah and Nabha Natesh, taking over the roles played by Tabu and Radhika Apte, respectively, in the 2018 Sriram Raghavan-directorial. Nithiin said he had seen Andhadhun and was a fan of the film, but remaking the story was a challenging process. The team was conscious to not spoil the world of the original movie, the 38-year-old actor said.

“The first time I saw the film I wanted to do it in Telugu. The biggest challenge for me with the film was that we should not spoil Andhadhun. It is an acclaimed film and we didn’t want to make something and spoil the original. My director and I would check every shot repeatedly to ensure we got it right. The way I look, talk, move, the body language, everything was taken care of.”

The actor said he tried his best to avoid being inspired by Khurrana’s National Award-winning performance. “I didn’t want to be influenced, I wanted to have my own approach towards the character. It was a big challenge because it is a cult film which got Ayushmann a National Award. So that made me more scared. I am really worried when people will see the film, will they troll me or praise me,” he added.