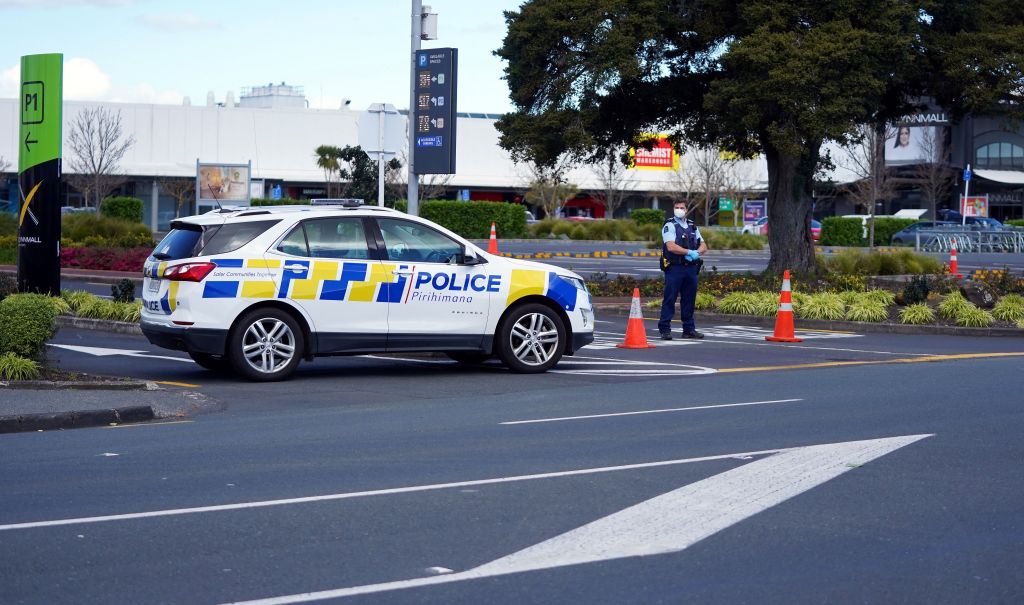 Police outside the Countdown supermarket at Lynn Mall in Auckland on September 4, 2021, the day after a attacker injured six people in a knife rampage before being shot dead by undercover police. (Photo by DIEGO OPATOWSKI/AFP via Getty Images)

NEW Zealand prime minister Jacinda Ardern said on Monday (6) the country’s strengthened counter-terrorism legislation would be passed by the end of September.

The new laws would plug a loophole that allowed a Daesh-inspired militant who carried out an attack at an Auckland supermarket attack to remain free.

Police shot dead Ahamed Aathil Mohamed Samsudeen, a 32-year-old Sri Lankan, moments after he launched his stabbing spree at the supermarket on Friday (3).

Samsudeen was known to authorities for about five years and had spent the equivalent of three years in jail over that period for offences including possession of objectionable materials and dangerous weapons and failing to assist police in exercising search powers.

Authorities repeatedly tried to keep Samsudeen in prison or deport him, but were stymied by the country’s current laws. Samsudeen was last released from prison in July.

Ardern said a counter terror legislation bill which criminalises planning and preparation that might lead to terror attack, will be expedited.

“We are still working to have that legislation passed before the end of the month,” Ardern said at a news conference.

“The really helpful thing is it has already gone through substantial public consultation so people have already had their say and we haven’t needed to rush that process,” she said.

“Now what we will do is go through that procedural process in parliament a little quickly.”

Samsudeen had fraudulently secured refugee status, Ardern said, and his status as a “protected person” barred his deportation to Sri Lanka.

“A complex case like this should not be used to make blanket law in the heat of the moment,” said Amnesty International New Zealand executive director Meg de Ronde.

“Big decisions should not be rammed through during times of crisis.”

Ardern acknowledged that New Zealand had international obligations but said the incident made clear the laws needed to be revised.

As Sri Lanka’s government promised to work with New Zealand authorities to investigate Friday’s attack, Samsudeen’s mother said on Saturday (4) that he was “brainwashed” by neighbours from “Syria and Iraq”.

She said Samsudeen was injured in a fall in 2016 and that the neighbours, whom she did not name, seized the opportunity to influence him, adding they “were the only people who helped him as he recovered”.

Her son had started posting radical views on social media after meeting the neighbours, she told the Hiru TV network from her home in Kattankudy, 330 kilometres (206 miles) east of Colombo.

“We knew there was a change in him. The change came after he left the country” and settled in New Zealand in 2011, she said.

She added her two other sons had reprimanded the 32-year-old over his radical views.

Sri Lankan police said Samsudeen was born in Kattankudy and brought up in Colombo where he went to a Hindu secondary school and studied maths and computer science.

His father is a retired school principal currently in Toronto, Canada.

Kattankudy is a majority Muslim town in eastern Sri Lanka. It was also the home to some of the alleged attackers who staged suicide bombings in Colombo on Easter Sunday in 2019.

Authorities were investigating if Samsudeen had any links with those who killed 279 people in the attacks on three churches and three hotels.

The 2019 bombings were blamed on a group that pledged allegiance to the then-Daesh leader Abu Bakr al-Baghdadi.

Sri Lanka’s government said it would work with New Zealand over the case.

Ratnasingam commended the quick response by New Zealand police in dealing with the attacker.

“We are collecting information about him as well as anyone else who may have had contacts with him,” a top police official said.

Sri Lanka’s Muslim Council has condemned the Auckland attack as a “barbaric act of terrorism”.

“Her statement soon after the incident defused the situation and ensured there was no harm to the Sri Lankan community (in New Zealand),” Rahman said.

Ardern insisted no one community should be singled out for the violence.

“It was carried out by an individual, not a faith, not a culture, not an ethnicity,” Ardern said.