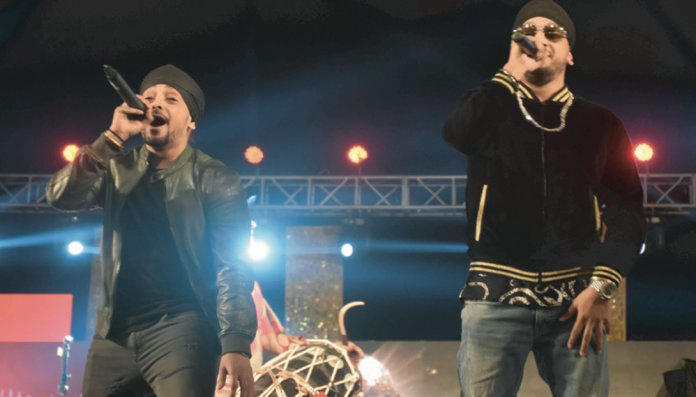 Popular British band Sahara has had a number of achievements globally since they formed in 1993, but one of the greatest is the impressive way they have made a mark in Pakistan.

One of the finest musical exports to Pakistan, Sahara has delivered live shows all over the country and built a bridge of peace through their music there. They are adding to their success with their terrific tracks being featured in the new Pakistani film Heer Maan Ja.

They have added that extra special musical touch to the romantic comedy about a runaway bride with Addi Maar and the title track Heer Maan Ja.

Eastern Eye caught up with lead singer Herbie Sahara to talk about his band’s impressive and unique Pakistan success story, including the latest tracks.

What first connected you to Pakistan?
The song Soniyeh Ni Soniyeh from our album Access All Areas went viral worldwide and overnight we were getting requests from Pakistan and other places to come over and perform. It was amazing to see in those days when social media wasn’t
even around.

How many times have you performed in Pakistan and what has been the most memorable?
(Laughs) Seriously, we can’t say how many times we have performed in Pakistan; we lost count over five years ago. One of our most memorable events was performing in front of over 50,000 people as the headline act in Lahore in front of dignitaries from India and Pakistan. Earlier in 2019, we played to over 40,000 at a festival too. It’s amazing how many background singers we have in the crowd.

How does performing in Pakistan compare to other countries?
We have a huge following in Pakistan and our concerts are usually a big deal. The love we get from our fans is amazing. Our songs are well received and there is a special Punjabi bond we have with everyone we meet.

What has been the most memorable encounter you have had in the country?
It was being made members of the Charity Red Crescent in Pakistan. It was a huge honour to receive the badge in an official ceremony.

How did your songs end up in the new Pakistani film?
We have worked with IRK films before in the film Parchi, where we gave them the song Billo Hai which became a huge hit. The team came back to us again and said they wanted more music for their film and we are delighted they chose two songs this time round.

Tell us about your songs in the film?
Addi Maar is a desi dance number, which has all the ingredients for a wedding-mehndi feel. It is produced by Manj Musik and features Nindy Kaur. Heer Maan Ja’ (Down n dirty) is more of an urban club track, which is the main promotional song for the film and is produced by Vee Music.

How do you feel about your tracks being featured in Heer Maan Ja?
It’s a very proud feeling seeing your songs featured in movies as cinema has a global reach. Also, all your efforts in composing, writing and co-producing are rewarded. It’s a
great feeling.

Tell us, what do you most like about the country?
Pakistan has friendly people where we get amazing hospitality and love. We are also blessed to be able to visit many of the historical Sikh sites and Gurdwaras whenever we go over.

What is the musical plan for the rest of the year?
Apart from the touring and gigs, we have two songs in the film Heer Maan Ja followed by three brand new Sahara singles releasing independently. The first is titled Worldwide and will be released in August. The video has been shot in Toronto, Canada. We have something in the pipeline with a Bollywood vibe too, so watch this space.

Which of your unreleased songs are you most excited about?
We have three new singles releasing, Worldwide, True Love and Zehr. They all have different vibes and grooves.

You are one of the hardest working acts, what keeps the motivation so high?
Seeing the love of our fans. Making people happy through music and putting everyone in a good mood and making their day memorable. We have met so many great people and been fortunate to travel all over the world just because of music.

What is your greatest unfulfilled musical ambition?
With god’s grace we are working hard towards something really big, which will be a dream musical ambition of ours. More to be revealed soon.

Which music is dominating your playlist right now?
We love the current new wave producers and artists from India. They have stepped up a notch and are putting out anthems and big tunes on a regular basis.

Today, what inspires you?
We love doing what we do. Music has the power to bring people from all walks of life together. We see it when we perform at multicultural events where everyone comes together regardless of ethnicity, culture or background. Just to see people happy, smiling and dancing are really inspiring.

Why should we watch the movie Heer Maan Ja?
IRK films is one of the new wave production houses who are at the forefront reviving Pakistani cinema. Heer Maan Ja is a new age romantic-comedy film, which has all the elements of a successful hit featuring Ali Rehman Khan and Hareem Farooq. The trailer has received lots of love and we are proud of the fact that we are the very first British Asian Bhangra artists to have songs in a big film in Pakistan.