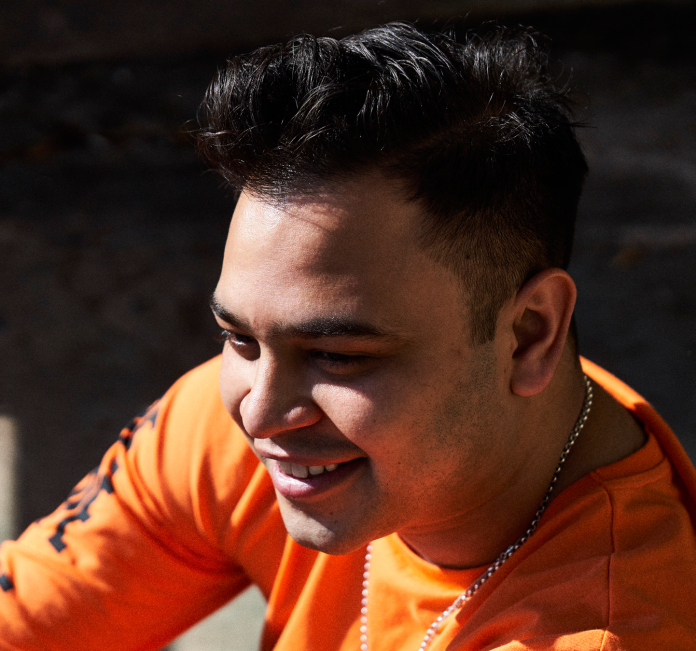 The greatest thing about the annual Glastonbury Festival isn’t the A-list stars, but exciting newcomers who are good enough to take the stage at such a massive music event.

One artist to look out for this year is explosive newcomer AMiR, who has been selected to play on the BBC Introducing stage.

The north-London born singer, songwriter and musician has made a name for himself on the live circuit and shared the stage with major mainstream artists. He recently released his debut album All Or Nothing, which has a variety of commercial songs that touch upon relatable subjects and based on personal experiences.

I caught up with rapidly-rising star AMiR to speak about his stunning new album, forthcoming Glastonbury performance, inspirations and plans for the future.

What first connected you to music?
As a child, there was always music playing. Both my parents love music and my granddad used to play Indian instruments and sing, so I soaked it all up from them. My dad would play George Michael, James Brown, Bob Marley, Bobby Brown and so on, but after watching a video which my mum recorded of Michael Jackson live in Bucharest, that was when I thought ‘I want this’.

How would you describe your time in the music industry so far?
A complete rollercoaster! I’ve been through some really terrible times that have impacted me on a personal level as well as professional. However, I would say that it’s the tough times, which really prove how strong you are as a person. So as for the rollercoaster, I queued for it, hopped on and I’m secured in. Hopefully, I don’t throw up when I get off.

What is the biggest lesson the music industry has taught you?
Surround yourself with good people, question everything and be yourself. I was never going to be the person who would do what I was ‘supposed’ to do. I was going to write, perform and live for the moment. So the lesson is, do you and don’t be ashamed.

Tell us about your upcoming debut album?
Fans can expect to hear music to dance to and lyrics to make you feel. These songs came from my heart and experiences, so hopefully, listeners will be able to hear or mirror their personal situations and emotions in them. I’m hoping people can connect with the lyrics as well as the music, as each song is a window into my life.

Tell us, what was the biggest challenge of putting it together?
I think it was more of a life challenge. Going through what happened with my previous management, the strain it put on my family and people close to me; these experiences have shaped the songs. The album reflects good times, bad times, tough times and the bad behaviour that goes with these negative experiences. I feel I have made them positive through writing this album, so I’m happy with the songs and order they are in and hope people are ready to enjoy it.

What is your favourite song on the album?
(Smiles) I could ask which of your children is your favourite. That’s a difficult question to answer as all of these songs represent a different time in my life. When I perform them, I remember where I was mentally, emotionally and physically when they were written.

Tell us, are any of the tracks based on personal experiences?
They are all based on my personal experiences. So anything and everything I went through is in there, the good and the bad. No One Else, for example, is about my relationship, which was going downhill as a direct result of my past management. The way they treated us ultimately destroyed our relationship, so this song is about the realisation that I could never have what we had with anyone else.

How much has performing live helped you grow as an artist?
Performing live is my ultimate satisfaction. Writing songs is, of course, like therapy, but nothing is more freeing and liberating as walking out on stage to literally share my happiness, love, pain and blood, sweat and tears, with everyone in the audience feeling it with me. It’s amazing sharing that moment. My growth as an artist because of performing live is evident as it’s linked to my creative process. I think about how to perform a new song live once it’s written.

Tell us, what has been your most memorable performance to date?
Shepherds Bush Empire opening for Gabrielle. It was a homecoming show and I had just got my voice back to full strength. My family were there and it was a very important venue for me personally too. I learned boxing in that town, I wrote Drench Me there, and now I’ve played the Empire like I said I would. So that one, in particular, stands out.

How much are you looking forward to performing at Glastonbury?
I cannot wait to play. My brother is going to be there. All my mates are scrambling to register for tickets. I’m proper buzzing. You can expect a clash of funk-pop and rock n roll heart and dance.

Do you feel nervous ahead of the gig?
Not at all! I cannot wait to shout, ‘hello Glastonbury!’ I said at the beginning of the year to my brother, ‘how awesome would it be to get on at Glasto?’ and then the email came through. I joked in my reply and said ‘no I’m busy that weekend’, but I cannot wait! Bring it on.

As a music fan, who have you loved seeing performing live?
Eminem, Red Hot Chilli Peppers, Foo Fighters, Fall Out Boy, Panic At The Disco and Craig David, just to name a few. I’ve learned so much from watching other performers. I can’t wait to step on stage and be my own version of the bands and artists I grew up listening to.

What music dominates your playlist?
Michael Jackson and Earth Wind & Fire at the moment. I’m loving disco funk and big brass sections. It’s in my soul as this was the kind of music playing in my house while I was growing up. Bruno Mars, Anne Marie, Ed Sheeran, Oasis, Guns and Roses and Queen are there too.

Tell us something about you not many people know?
I love pool/snooker and it’s the one thing (away from music) that fully clears my mind. I also love reading about astronomy and evolution. I love listening to Richard Dawkins and Christopher Hitchens talk about evolutionary biology and Neil deGrasse Tyson talk physics. I also listen to podcasts in the car when I’m driving long journeys.

What inspires you?
Life and the people I love. I rarely need to go looking for inspiration as it’s everywhere, but primarily, I base songs on my life, how things impact me or people I care about. I’ll try to write my songs sincerely from the heart. I would not try to write something I know nothing about.

What is the master plan going forward?
Rock Glastonbury and hope more stepping-stones appear along the way. In the meantime, I’ll be in the studio with James Birt who I co-wrote eight of the 11 songs on the album with. He is a really inspiring guy, amazing drummer and keys player. We’ve become friends and feel we have struck gold every time we write, simply by allowing each other to express ourselves. He’s one of the best people I’ve worked with. He plays a lot of the parts on our songs, but I play the guitars and bass on my tracks, and of course, all the vocals.

Who would you love to collaborate with?
Craig David, because he was the first person I saw live as a child, and his vocal ability is absolutely amazing live in a world dominated by auto-tune. Otherwise, I’m willing to work with anyone really, but it’s important we get on as many people before we can start making music together. Music is part of the soul and I can only show that when we are both ready to show; only then can we show the world.

If you could ask any artist alive or dead a question, who would it be and what would you ask them?
I would ask Noel Gallagher to borrow some of his money and can I have his Union Jack guitar, please?

Why do you love music?
Music speaks to me the clearest, more than any person ever has. I was told by teachers I would never get anywhere. Not all my teachers, but most were very dismissive of my ambitions. As I was a student who finds it difficult to concentrate on something I’m not interested in, they said my work ethic and attitude will result in failure. Music never judged me.

Why should we all pick up your album?
If you feel like you you’ve been working for too long and need a break, broken up with a partner, know someone feeling down and want to put a smile on their face or just straight up want a party, then get my album. Put it on and laugh, dance, cry, and smile all the way through it. It’s my heart on a record. I look at this album as a party invitation and everyone is invited, but I can only host the people that show up. I made it with love and hope you love it.