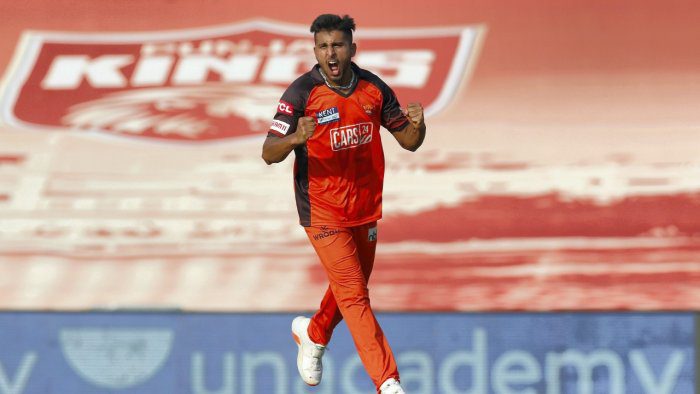 Speed demon Umran Malik is being backed to win a place in India’s bowling attack after lighting up the IPL with deliveries of more than 150kph (93mph) and wickets galore.

The 22-year-old returned figures of 5-25, becoming the first player on a losing team this season to be awarded man of the match, as his Sunrisers Hyderabad team went down to Gujarat Titans in a last-over thriller on Wednesday.

Malik’s rise from the Jammu region of Indian-administered Kashmir to the Indian Premier League has been nothing short of a fairy-tale.

Former Test captain Sunil Gavaskar had already predicted Malik would play for India and, after the express bowler’s five-wicket haul, said India should “take him to England for the one-off Test and the limited-overs (in July).”

Former England batsman Kevin Pietersen said on Star Sports: “I think what was more exciting than these five wickets is the way Sunny (Gavaskar) was celebrating in the commentary box.

“Punching the ceiling, jumping and screaming. I think Sunny did that because how often have we seen India producing the fastest bowler in world cricket?”

India, once renowned for producing spin bowlers, currently have a potent pace attack led by Mohammed Shami and Jasprit Bumrah.

The fast bowling revolution was started more than 20 years ago by Zaheer Khan, now director of cricket with Mumbai Indians, and has seen a steady stream of world-class pace bowlers emerge since.

Malik, menacing with a thick mop of hair and a silver chain, bowled Saha with an unplayable yorker at nearly 153kph to raise the roof at the Wankhede Stadium in Mumbai.

He flattened Miller’s stumps with another pacy delivery and then bowled Abhinav Manohar for a duck to register his first IPL five-wicket return.

– ‘Learn and improve’ –
“The idea was just to bowl as fast as I can. The ground is slightly on the smaller side so the idea is to stay on the stumps, mix the pace and try to keep the ball within the stumps,” Malik said.

Malik was picked up by Hyderabad last season as a Covid replacement for T. Natarajan.

His raw pace in just three matches prompted the India team management to keep him in the United Arab Emirates after the IPL as a net bowler for the T20 World Cup.

Hyderabad, champions in 2016, retained him for $523,000 ahead of the auction this season and the bowler has repaid them with 15 wickets in eight matches.

“The rise and rise of Umran Malik is the story of this IPL,” tweeted former India opener Wasim Jaffer.

Malik was mentored by former India fast bowler Irfan Pathan at the Kashmir state side and now is under the tutelage of South Africa fast-bowling great Dale Steyn, Hyderabad’s bowling coach.

“The most pleasing thing with Umran is he is constantly wanting to learn and improve.”

The troubled region of Kashmir has thrown up exciting talent in the IPL including Malik’s Hyderabad teammate Abdul Samad, an attacking batsman.

Off-spinner Parvez Rasool became the first player from Jammu and Kashmir to be awarded an IPL contract in 2013.