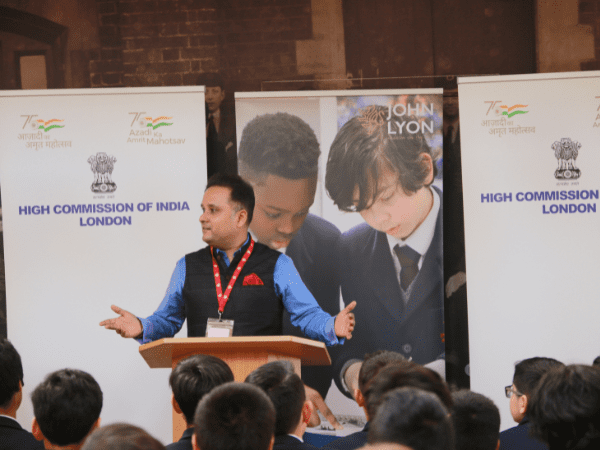 The school welcomed Shitanshu Chaurasiya, first secretary of the Indian High Commission, and Amish Tripathi, author and director of the Nehru Centre — the cultural wing of the High Commission of India in the UK.

During their visit, Chaurasiya and Tripathi met a small number of pupils and staff over light refreshments in the school’s Red House. There, a variety of India-related issues were discussed informally.

Chaurasiya inaugurated the first event explaining his role and the work the High Commission of India, London, does. He then presented Haynes with books for the school’s library, personally donated by the high commissioner.

Haynes reciprocated by presenting the High Commission with an oak plant, grown using an acorn from one of the oldest trees at the school.

This brief introduction was followed by an engaging and thought-provoking excellence programme talk by Tripathi entitled ‘Understanding India: Among the oldest living Civilisations’.

The talk was delivered to a packed New Memorial Hall, comprising Year 7 and Year 8 pupils.

Tripathi initially discussed his broad career journey– from a banker to an author to a film producer and diplomat — and then answered questions prepared by four students of the school: Eric, Jon, Troj and Ayaan.

The questions covered various topics — from the history of India to its relationship with the UK to the effect of the ongoing war in Ukraine on India.

Tripathi’s talk was interactive and energetic, and the pupils were captivated throughout.

The second event was an outdoor yoga session on the Red House lawn, both as an early celebration of International Yoga Day (June 21) and to boost physical and mental health. The session was conducted by Joemie Moes, who teaches biology at the school, and was attended by a number of pupils and staff members.

The school thanked Chaurasiya, Tripathi and the High Commission of India for visiting it and expressed hope that there will be many more collaborations.