INDIA’S former foreign minister Sushma Swaraj passed away in New Delhi on Tuesday night (6). She was 67.

The senior Bharatiya Janata Party politician was taken to the All India Institute of Medical Sciences (AIIMS) late on Tuesday night, reports said.

Swaraj had a kidney transplant in 2016 and had opted out of contesting India’s general election earlier this year citing health reasons.

On Monday (5), when the Indian government revoked Kashmir’s special status, she said on Twitter: “Thank you Prime Minister. I was waiting to see this day in my lifetime.”

India’s prime minister Narendra Modi led tributes, stating on Twitter that her death was a personal loss and that she played “key” role in improving the country’s ties with various nations.

He added: “I can’t forget the manner in which Sushma Ji worked tirelessly as EAM (External Affairs Minister) in the last 5 years. Even when her health was not good, she would do everything possible to do justice to her work and remain up to date with matters of her Ministry. The spirit and commitment was unparalleled.”

She is survived by her husband Swaraj Kaushal and daughter Bansuri.

Swaraj was known for her oratory skills and in her role as India’s foreign minister, earned a reputation for her prompt responses on Twitter to queries relating to visas and consular matters.

She was among few politicians who was respected by the Opposition.

The Congress party said: “We are saddened to hear about the untimely demise of Smt Sushma Swaraj. Our condolences to her family and loved ones.”

In a political career spanning more than four decades, Swaraj held several posts. She was previously a chief minister of Delhi and later became the minister for information and broadcasting, health minister and parliamentary affairs from 2000-2004.

In May 2014, she was promoted to foreign minister in Modi’s government. 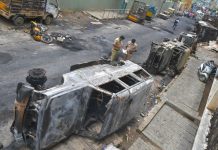