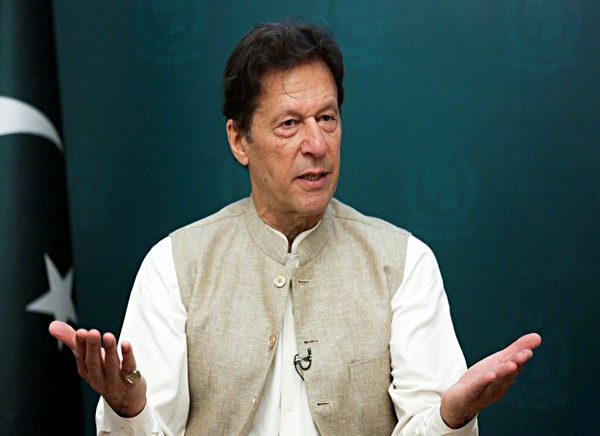 In a fresh revelation, Pakistan Defence Minister Khawaja Asif said that former Prime Minister Imran Khan’s party has now apologized to the US against whom it had levelled allegations of planning to conspire to throw the cricketer-turned-politician out of power.

He said that the government has procured all the evidence that the party apologized to the United States’ Assistant Secretary for South and Central Asian Affairs Donald Lu for levelling foreign conspiracy allegations against him. Speaking during the Pakistani local Geo News programme “Naya Pakistan”, the defence minister said, “We (the coalition government) have obtained all records regarding PTI’s apology to Lu.

Evidence has been received regarding PTI leaders’ meeting with the US government where they tendered an apology.”

Continuing further, he said that while Khan was chanting slogans against the US during his public gatherings, he is now “apologising for his mistakes”.

Asif also said that the PTI chairman has sent a message to the US where he desired his wishes to “fix things and his relationship with the superpower”.

He also responded over the leaked audio of former first lady and Imran Khan’s wife Bushra Bibi. Notably, in the leaked audion, she could be heard instructing PTI’s Dr Arsalan Khalid to run traitor trends on social media. Over these reports, Asif said that the PTI can file a petition in the court to get the leaked audio verified through forensics from a third party, as per the media portal.

The defence minister said that Imran Khan is trying to defame institutions now that he has lost the top seat and his government fell through the no-confidence motion. Asif added, “he should be ashamed of levelling allegations against the institutions.”

On the “contradictory remarks” by Imran Khan in regards to the foreign conspiracy, Asif said, “In the past, we too criticised the institutions but never levelled allegations.” He went on to saying that till the time Khan was in power, he liked all these things which he has been commenting against.

Earlier, while addressing a rally on June 6, Imran Khan had called for the sacking of Donald Lu.

Taking a pot shot at the Pakistani Army, Imran Khan had said, “We ask the neutrals … when your work is to defend the country and it was discovered that this cipher had come and Donald Lu told our ambassador to oust Imran Khan … when the National Security Committee said interference happened and issued a demarche to the US, was it not the work of those whose job it is to defend the country to stop this conspiracy instead of being neutral?”

Imran Khan’s anti-American rhetoric and his accusations against the US for conspiring to oust him from power are also damaging the country’s relations with the west, according to an analysis.

Pakistan’s economy is already facing a huge challenge and the country often turns to Western-led multilateral financial institutions including the International Monetary Fund (IMF) and the World Bank.

Islamabad’s economic woes dictate that it should mend fences with the west as Khan had turned for help with the country’s economy to the Washington-based IMF, which has provided 22 bailouts to Pakistan since 1958.

Cricketer-turned-politician, Imran Khan’s bold statements regarding Washington’s role in an alleged “foreign conspiracy” to oust him from power could have a negative impact on bilateral ties and could make US officials more careful in interacting with Pakistan officials, diplomatic observers said.