‘I was desperate to update my profile pic’: This Sri Lankan CEO with ‘Vitiligo’ has an important message about body image 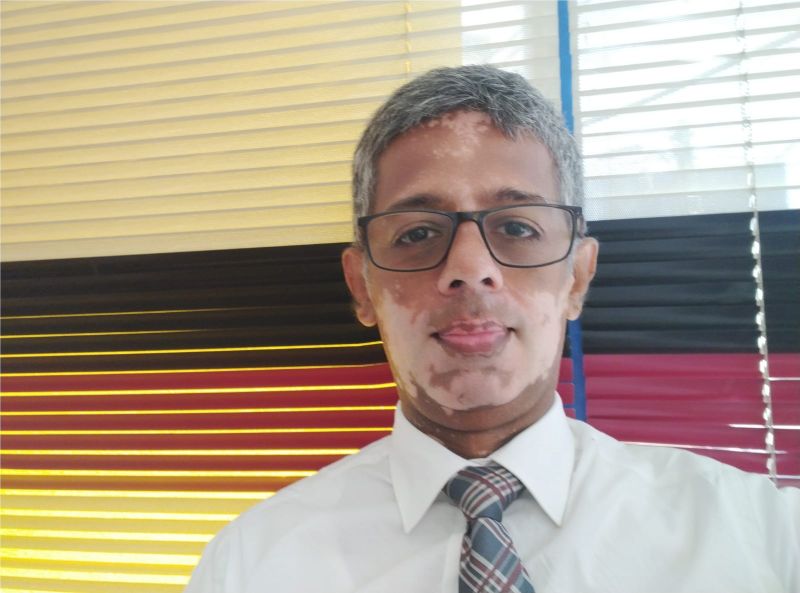 A top-ranking business executive of Sri Lanka has shared the dilemma he went through before updating his social media profile picture as he became dichromatic due to vitiligo.

Diagnostics company Sui Generis CEO Thushara Karunaratne said in a LinkedIn post that he wanted to update his photo for a long time but he was not sure what his contacts would feel about him. “This image is here as I was desperate to update my profile pic for a long time. Since I’m becoming Dichromatic due to #VITILIGO, I wasn’t too sure how to do it, whether my contacts would be comfortable. I haven’t travelled outside the country & very less meetings locally too. In case we bump into each other, just wanted (to) let you know… same self, lives inside,” he said in the post last week.

He also revealed that he has given up treatment for the condition that causes white patches on the skin.

According to the Mayo Clinic website, the condition occurs when cells that produce melanin die or stop functioning. Vitiligo affects people of all skin types but it is not life-threatening or contagious, the website says.It is difficult to predict how this disease will progress and sometimes the patches stop forming without treatment, it adds.

Reactions poured in as Karunaratne shared his experience, with LinkedIn users lauding his courage and some sharing their own lived experiences.

“Never bother about what people think and say. Be yourself and be normal. After all, it’s the color of the skin outside and underneath it’s always RED for everyone. You can always win the world with your inner beauty. Get your wings charged and fly high under the open sky,” LinkedIn user Phani Chandra Sistla.

“Nothing wrong with you, it can happen to anyone, I had the same issues when I was a child on both legs on my knees, and I was so ashamed to wear skirts because everyone was staring at me, bullying me , until I decided, that’s how it is and I’m ok with it,” Alexandra Trif shared her own experience with vitiligo.

Punit Singh said, “Thanks for your post Thushara Karunaratne. I remember, in my childhood, I had a relative with similar condition, they looked very weird to me and I often asked why they looked like this. Back then there was not much awareness about it. After reading your post, I went and read about #vitiligo , and thanks to you that I am more aware than I was yesterday.”