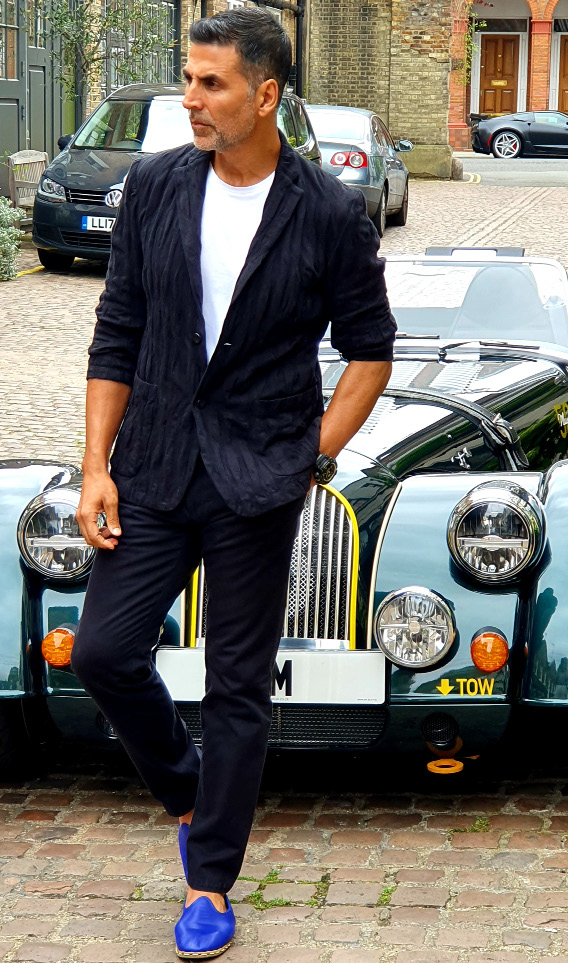 The latest movie releases from Akshay Kumar have expanded the horizons of Hindi cinema.

The other thing his path-breaking commercial projects have in common is that they have revolved around ordinary people doing extraordinary things and the same happens with his new film Mission Mangal.

The inspirational story, based on real events, boldly goes where no Bollywood film has gone before and revolves around a team of Indian scientists successfully launching a satellite to Mars quicker and more economically than any other country.

Akshay described the film as a perfect balance of entertainment, education and inspiration, so was feeling confident when he took a break from his busy schedule to talk about Mission Mangal and his formula for success.

You are known for commercial cinema, but didn’t you think Mission Mangal would be too experimental for mass audiences?
Bollywood has transported audiences to fantastical worlds and today also recreates reality. This is a combination of both. For me, this still seems like a fantasy and enabled me to be part of something bigger than myself. Space exploration was a dream of mine and while I didn’t literally make it to the stars, I’m more than happy where I landed. This film reflects our country’s dedication to turn a dream into reality. In terms of being experimental, if Hollywood has successfully made many movies about space, why can’t we do the same in India?

Tell us about the film?
Mission Mangal is the incredible true story of India’s first space mission to Mars, which made the country’s scientific and space dreams a reality. It is a tale of ordinary people doing extraordinary things and inspiring generations to dream big and achieve the impossible. It showcases that we can truly achieve something magnificent and even surpass the world’s best when we work together. I play a scientist called Rakesh Dhawan, the mission director, who, alongside Tara Shinde, played by Vidya Balan, is in charge of leading the team that are behind the mission.

Tell us more…
A team of incredible scientists battle personal and professional challenges to work together, using their intelligence, experience and revolutionary thought to give success to India’s first mission to Mars. It highlights how they collectively overcome challenges and achieve what was touted as an impossible feat. I’ve made this film mainly for children so that they are encouraged to become scientists. Currently, with ISRO’s launch of Chandrayaan 2, people have become more aware of the importance of the profession and I hope the film manages to convey that it is a great profession to be in.

What was the biggest challenge you faced with this role?
Honestly, I didn’t know much about India’s Mars mission before the film. I didn’t realise just how magnificent their achievements were until I learned about the facts. It was truly an overwhelming experience to sink into the character even though I have done over 150 films. We were bringing to screens one of the proudest moments in Indian space history and we had to be extremely responsible in our portrayal of the scientists, as we wanted to do absolute justice to their achievement, innovation and genius. Our director Jagan (Shakti) had immense clarity and all my co-stars did their job so well that it inspired me to put my best foot forward too.

You must have learned a lot during the journey of this film?
When Jagan narrated the script, he told me some astonishing facts that really opened my eyes. Jagan’s sister works at ISRO, so he had done his homework at home only. (Laughs) Thanks to this, all of us, while shooting the film, discovered so much we were completely unaware of and it only made us even more proud of our nation and the incredible expertise we have in the field of science. It was one of the most significant landmarks in our nation’s history.

How does a solo-starrer compare to an ensemble film like this one?
I have been lucky to star in films of all kinds throughout my career. Whether it’s a solo or an ensemble star cast, there’s pressure, so there’s no excuse but to do your best. I have worked with actors from different generations at every stage of my career and learned so much from each one. Multi-starrer films are more enriching, as there is room for the actors to learn and grow together. When you work with a great team like Mission Mangal, it brings out the best in you.

How does it feel being the senior most actor in a film with so many leads?
(Laughs) Are you saying I’m old? I don’t feel like I am a senior actor because all of these amazing women I worked with in Mission Mangal have such phenomenal experience. Their talent and body of work are something that inspire me and even though I have worked with Vidya (Balan), Taapsee (Pannu) and Sonakshi (Sinha) before, it is really refreshing each time as they have something new to offer. Although it was my first time working with Kirti (Kulhari) and Nithya (Menen), they had so much creativity and insight. Mission Mangal was like one big family and I am glad I had the chance to experience the incredible camaraderie.

What is your favourite moment in the film?
After knowing the fascinating facts about Mangalyaan I said yes to the film, but witnessing the scene when the spacecraft gets ready after all the hurdles and the final countdown begins, is something that will be in etched in my memory forever. I hope the audience enjoys it as much as we did and gives the film all the love and appreciation it deserves.

Are you hoping this will be the beginning of more space films in Bollywood?
Absolutely. Space films are an experimental genre in India and despite so much potential for storytelling, mainstream filmmakers haven’t taken them up. We are proud to be presenting India’s first-ever space film with such rich talent. We can only hope that this inspires more true stories, so that the people of our country can learn about the incredible achievements of our nation and feel proud.

The film is about crossing new frontiers, but are there any you want to cross as an actor?
All of my career, I have strived for excellence, pushing my boundaries and doing things I otherwise wouldn’t believe in. The key is to keep challenging yourself. Through tough challenges, you become stronger and learn just how much you are capable of. This belief has helped me grow as a person and get to where I am today. I will never stop moving forward, but, at the same time, I wish to keep entertaining and inspiring my audience through stories that are relevant, meaningful and add value to their lives.

What are the key things this film has taught you?
Playing a space scientist for the first time in my career at the age of 51 gave me an insight into a completely different profession, which certainly added to my perspective on life. This film reinstated my belief in the importance of hard work and not giving up. I believed that if you set your mind to something you can achieve anything and the story of India’s Mars Mission through this film reaffirmed that.

What is your all-time favourite space-set film?
I have watched a few space films from Hollywood, but after having done Mission Mangal I don’t think I can call any other film my favourite. Not because I acted in the film, but it is a story that gives me a feeling of pride like no other.

The film industry has become expansive, but it has also become unpredictable; does that put pressure on you?
I have believed that content is king at the box office. If the script is good and presented well, it will surely appeal to audiences. There is a certain element of unpredictability in every industry and Bollywood is no different. The audiences have changed and so has our approach to making films. People want nothing but the best from films and this demand for excellence can put you under a lot of pressure. But this pressure makes us work hard to produce films that are nothing short of what our audiences deserve.

Do you have a coping mechanism to deal with the pressure?
I have been in the business for over two decades and each day comes with its own set of challenges. What I have learned is not to let these challenges overwhelm me, as it will affect my productivity. I take each day at a time and enjoy the process of learning and growing as an individual and professional. It is important to entertain people while staying true to myself and I constantly keep striving towards that.

How do you handle the highs and lows of being in the public spotlight?
I consider myself as an ordinary human being who does a full-time job as an actor. Every profession has challenges and, in our case, it’s being in the ‘public spotlight’ 24/7, but that’s what we are here for; to please our fans and be loved by them. The age of digital media has increased the challenges, but I have taken them in my stride and don’t really let them affect me. As a plus point, social media helps me to connect with fans and gives me a platform to spread positive messages such as women empowerment and inspire real change.

Mission Mangal is about scientists, but do you have a formula for success?
There is no fixed formula for success in any profession; all it takes is a lot of hard work and determination to successfully overcome challenges. Mission Mangal actually demonstrates how sheer determination of a team made an impossible mission successful. In my time in the industry, I have made it a point to step out of my comfort zone and do films people wouldn’t otherwise believe in, such as Toilet and Pad Man. I will keep pushing myself and taking risks as long as I believe in what I am doing.

Why should we watch Mission Mangal?
I think it’s high time India celebrated its achievements and what better way than via the power of cinema. Our film is based on an unconventional subject and is a tale of ordinary people doing extraordinary things against all odds. It is an entertaining film for the entire family and I’d encourage everyone to take their kids along to watch this film so they are aware of this amazing true story. I hope after seeing Mission Mangal every little girl around the world will dream and get inspired that this is a job even a woman can do.

Please give a message to fans…
I am extremely grateful to my fans for having been a constant part of my journey all these years. I would not have achieved so much and come such a long way had it not been for their unconditional love and support. I hope they shower the same amount of love on my colleagues and everyone involved in making Mission Mangal, as they have for all my movies.

Mission Mangal is in cinemas now