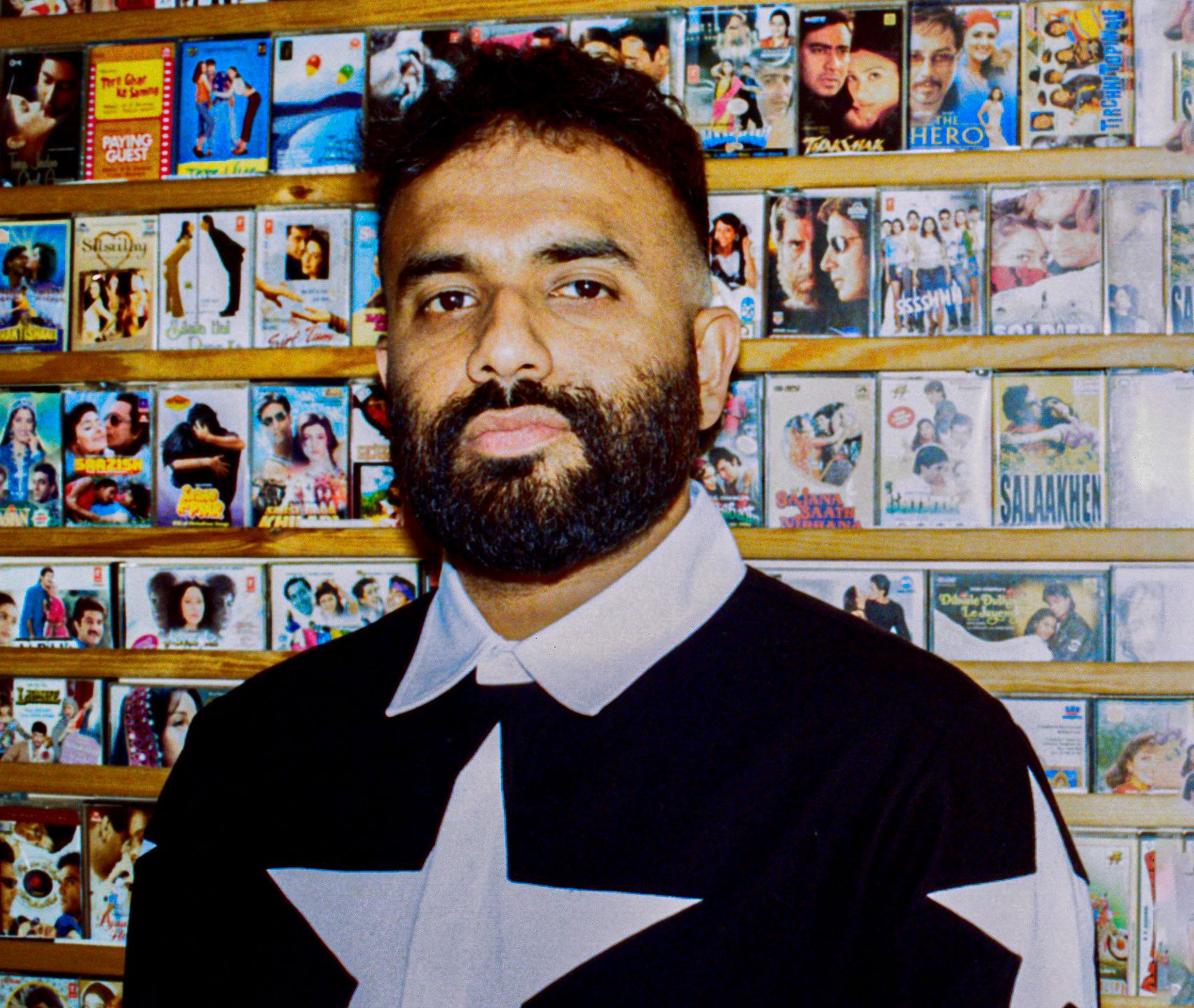 This has not only drawn attention to the power of words, but broken new ground for creative talent, including him becoming the first poet to open Soccer Aid, the FA Cup and BAFTA awards. He has also raised much needed awareness about mental health and spoken openly about the grief he felt after losing his mother.

From live performances in packed auditoriums, acting in a film, appearing on TV, reciting a poem with world boxing champion Tyson Fury to winning awards and becoming the face of H&M, he has done a lot. But the most special moment of his journey will be the publication of his highly anticipated debut book Life Is Sad & Beautiful on May 12.

The collection of poems drawn from different parts of his life touch upon deep emotions and launch the next chapter in his remarkable story.

Eastern Eye caught up with the unstoppable 31-year-old from East London to discuss his journey, new book, sky-high expectations and how he got through difficult times.

Have you had a chance to enjoy all your success?
To be honest, there’s no time because you wait so long to get to where you want to and then just don’t feel comfortable taking your foot off the gas. I think I get it from my dad, like I’ve never seen him take a day off work even until now. I guess it is the only thing I really know how to do.

Is there a moment that was the most special?
(Thinks) One moment that was really special was when I did the Oprah Winfrey show The Me You Can’t See. That was the first and only time I showed my mum’s photo. I didn’t have her permission to do it, but felt it was important because people needed to make sense of the story. The most beautiful thing about the entire situation was that the show ended up coming out on my mum’s birthday.

For me a great moment was you opening the 2021 BAFTA awards with your ground-breaking poem. What was that like?
Thank you for saying this. It makes me smile. I wrote that of my own accord and sent it to them. No one asked me to do it. They replied back saying yeah we love it, can we use it. I was like, yeah let’s go! I just wrote that as a massive film fan. Film has the power to change so much in society and I wanted to be part of it. I’ve done a little bit of acting, but wouldn’t say I’m an actor, but wanted to play a small role in this event and wrote Moving Image. They really liked it and put it on. It was really special. I’m really glad you liked it, Asjad.

You’ve met some really remarkable people. Is there one that stands out?
There have been so many. I’ve been so lucky and fortunate. I think it’s really anyone that opens their heart and accepts my work. Like, literally yesterday I bumped into someone on the street, and they were telling me how much my work means to them. In terms of specific people, I couldn’t tell you as that would be doing a disservice to everyone else. But yes, there’s been some really special people. Every day, I wake up, pinch myself, and think I’m so lucky to be out here doing this and navigating in the space, where I didn’t think I’d get this far.

How do you feel about your debut book being published?
I’ve been writing poetry since I was 13-14 years old and now, I’m 31. So, yes, I’m excited my book is coming out. I’m overjoyed and everything, but there’s so much more work that needs to be done in this world of publishing and literature. It’s taken me a very long time to get here. Now I’m here, I’ve got plans. I have another book coming out next year, which I think you’re really going to like. I’m planning something I think will be revolutionary for ethnic minorities, especially south Asians, when it comes to the world of publishing. I’m really excited and don’t want to overshadow this book by saying that there’s more work to do, but it’s hard to make sure your worth is met, and you don’t just do something for the sake of it at the wrong time in your life.

You turned down big publishers before agreeing to this debut book deal…
Yes, because I felt like they didn’t respect me and that was really difficult. But now I’m here and glad I did that because I trusted my gut. My mum always told me, whatever is meant for you is never going to miss you, so I just always run with that.

How did you select the poems for the book?
Honestly, so many poems never made the cut. The book is broken into five chapters, and each is a different phase of my life. It starts somewhere from when I was 13-16 and there’s all the poems that served me in my life, in that era. I chose them by looking at poems that helped me most. There is a part in the book where I write, ‘these poems helped me so much that it’s now time for them to be released to the world’.

Would you give an example?
There is a poem called My Name Is Hussain that ended up going viral so many times. At the time I wrote that poem, there was 40-50 other poems I’d written that never came out. So, it’s important they come out now. They have served their purpose for me, most definitely, but I chose them by selecting ones that helped me most.

Is there a key message you want to convey through this book?
Yes, that life is really sad, but if you work at it, your life can also be very beautiful.

You have spoken openly about your own depression and mental health, especially after your mother passed away. What helped you get through difficult times?
I think checking myself is really important, but also expressing myself in the moment that the emotion is given to me. Like, I really truly believe that emotions are a divine gift sent from God and when you’re feeling that emotion it is the time to act on it. It doesn’t mean you act out of character, but if I’m feeling something I have to write about it and get it out of me, and install that practice into my life of feeling something. I could be in bed, a car, a family dinner or anywhere, if I felt
something I have to go and write about it. So, that’s the main component that’s really helped me most through grief, loss, and sadness.

Is there one poem in the book that’s closest to your heart?
I can’t answer that because so many are special. It’s really interesting, in that the book has so much grief, but then towards the end, I find out people very close to me are having babies and children, and all of a sudden there’s new life. So, there’s heartbreak, but also the love, so it’s hard to pick. But performance wise, there are certain ones I love performing more than others.

You have a great gift of being able to connect with people’s emotions when you write. What inspires you when coming up with these poems?
Like I had said, it’s about emotions. For every poem, I can tell you what happened when I wrote it. For example, there’s a poem in the book called Fridge Magnets. My friend and I were in Paris, and when I saw the Eiffel Tower for the first time at the age of 30, I started crying. He was like, why are you crying, and I said because normally when I go on holiday, I will buy magnets to take home to my mum to put on the fridge, but this time I saw the Eiffel Tower and didn’t buy one. I’m crying because that’s told me she’s not here anymore. So that poem Fridge Magnets came out of that emotion of staring at the Eiffel Tower. So, each poem was created at a different place, stage, part of my life, from when I was in Kashmir and Lahore to Colombia, Magaluf or Lakeside when I worked there in Primark. So, every poem has its own story. Funnily, I can remember the story to each one of them.

Do sky-high expectations scare you or make you work harder?
For me, if it’s moved me then it has done its job. If it’s done what it needed for me, then I just need to put it out there and see what happens. One thing I’ve learnt is that if you are true, vulnerable, raw, and honest with your poems, they will age beautifully well. If you see the trailer for the Oprah Winfrey show, the poem they used was released five years ago. So, I’ve learned to not compare myself. I’ve learned to not look at other people’s success and think why not me because as long as my stuff is true, honest and real, it will have its moment. It could be today, tomorrow or in five years. I’ve learned that what you’re meant to do will get to the where it’s going to go. You just can’t control how long it’s going to take.

Finally, why should we pick up your new book?
I’m 31 now. When I was growing up, I never ever heard or was given a name like mine to read from, so I hope this book provides you with a sense of identity and also feel like a part of it is you. I hope people support this important moment of my life and this book in particular because you don’t really see names like ours in spaces like these. It’s important for representation, but also to inspire the next generation thinking about doing this. They are looking around them and not seeing anybody. Also, because I think the poems are pretty decent as well.