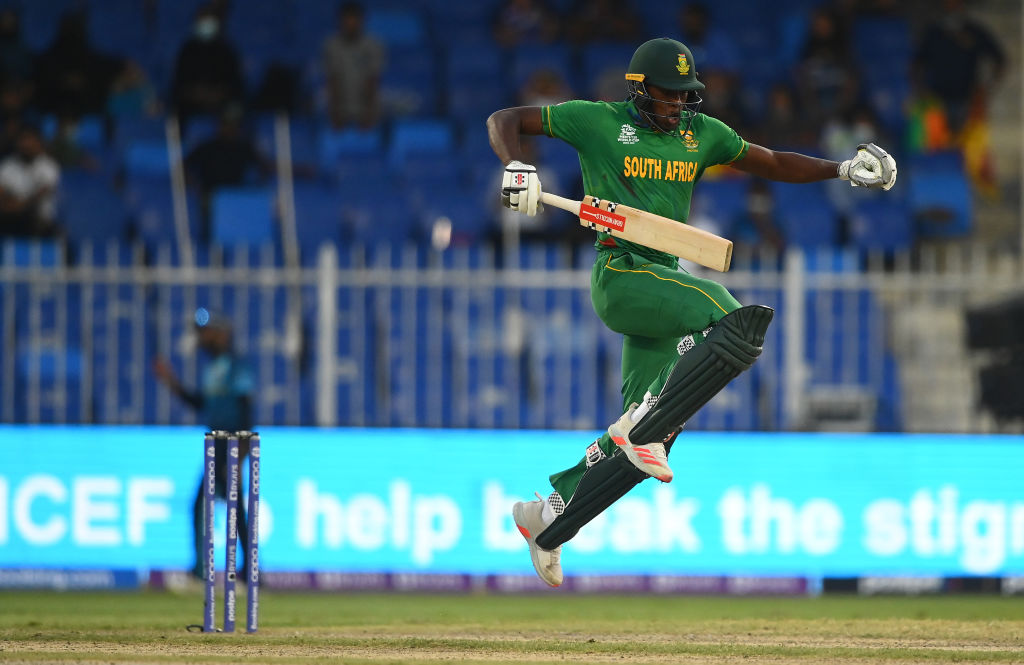 DAVID Miller and Kagiso Rabada combined to propel South Africa to a thrilling victory as they edged Sri Lanka by four wickets despite a hat-trick by Wanindu Hasaranga in the T20 World Cup on Saturday (30).

With South Africa needing 15 off the final over bowled by Lahiru Kumara, Miller smashed two sixes and Rabada struck the winning boundary as South Africa reached their target of 143 with one ball to spare in Sharjah.

Miller finished with 23 off 13 balls while Rabada made 13 off seven to carry their team home after Hasaranga took the third hat-trick in tournament history.

South Africa skipper Temba Bavuma admitted it had been a tough few days after the Quinton de Kock controversy.

De Kock was recalled to the team on Saturday (30) after refusing to take the knee in Tuesday’s (26) game against the West Indies.

“It’s quite hard to put everything together that’s happened over the last couple of days,” a relieved Bavuma said.

“There was a bit of it at the back of the mind but we had a job to do and we had to dig deep.”

Sri Lanka skipper Dasun Shanaka said he had no regrets over using Kumara for the final over.

“It was enough to defend for Lahiru,” Shanaka said.

“He was bowling yorkers and he was superb in the practice games which is why I went with him.”

Hasaranga’s figures of 3-20 were not enough for Sri Lanka who made 142 in their innings.

His triple strike was spread over the final ball of his third over and the first two of his fourth and pushed South Africa to a precarious 112-6 with his second victim, Bavuma, out for 46.

The left-handed pair of Miller and Rabada then smashed 34 runs between them to give South Africa their second straight win in the Super 12 stage.

Sri Lankan fast bowler Dushmantha Chameera had struck twice in his second over to send back the South African openers including the recalled de Kock caught and bowled for 12.

Bavuma stood firm to put on key partnerships including a 47-run fourth-wicket stand with Aiden Markram to raise hopes of a successful chase.

Markram made 19 before attempting an extravagant off drive against Hasaranga off the last ball of the 15th over but missed the ball that crashed into the stumps.

Hasaranga came back strongly in the 18th over to get Bavuma and Dwaine Pretorius off the first two balls before Miller and Rabada robbed Sri Lanka, who have two losses from three Super games, of a win.

Ireland fast bowler Curtis Campher took four wickets in four balls in the qualification stage against the Netherlands. Australia’s Brett Lee took the first hat-trick of the competition in 2007 against Bangladesh.

Bavuma praised leg-spinner Tabraiz Shamsi for his three wickets that set up the win.

“Shamsi is a big player for us, a weapon, we’ve seen wrist spinners are always effective in this format,” said Bavuma.

De Kock returned to the South Africa starting lineup after missing the previous match after refusing to take the knee.

Having apologised for his stance, he knelt down in support of the anti-racism gesture along with the rest of the Proteas team.

Fast bowler Anrich Nortje struck first as he bowled Kusal Perera for seven in the fourth over, but Nissanka and Charith Asalanka put on 40 runs for the second wicket.

Asalanka was run out in an attempt to take a second before Shamsi took charge with his leg-spin bowling to push Sri Lanka on the backfoot. He made 21 off 14 balls.

Shamsi, who is the world’s number one ranked T20 bowler, sent back Bhanuka Rajapaksa caught and bowled for nought and then got Avishka Fernando for three in a similar dismissal an over later.

Harasanga became Shamsi’s third victim with Sri Lanka in trouble at 91-5 in the 14th over.

Nissanka hit back to reach his second half-century in the shortest format and smashed six fours and three sixes to surpass his previous T20 best of 61 and provide Sri Lanka with a fighting total.

He finally fell to Pretorius who had figures of 3-17 from his three overs.

“Feel like a newcomer all over again,” says Alia Bhatt…

Pratik Gandhi: It’s a huge honour for me to play…