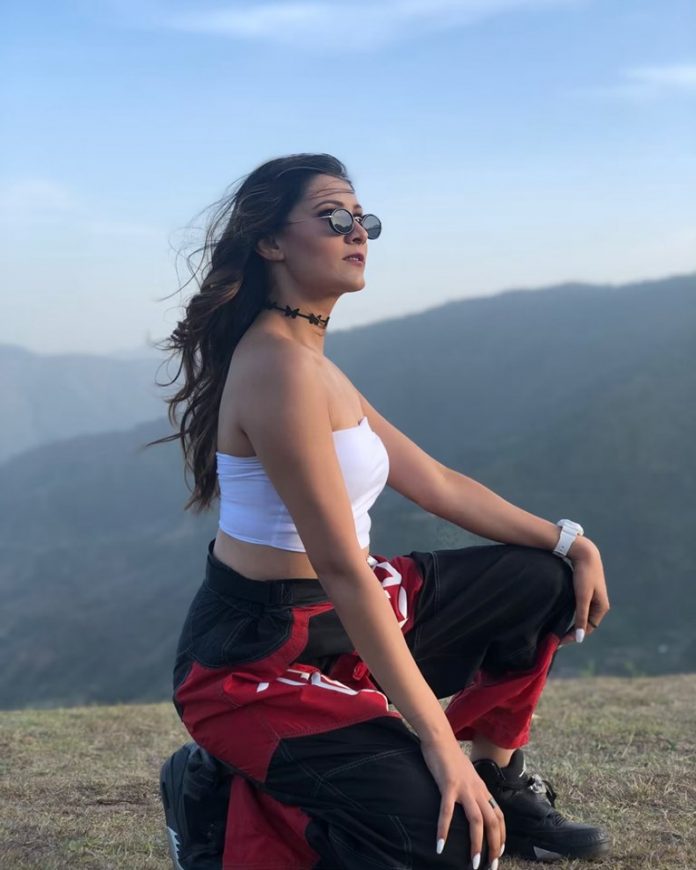 Electrifying young star Aastha Gill has generated a lot of excitement with super hit songs that have lit up the charts around the world.

She has also struck up a great partnership with popular rapper Badshah and made a name for herself as one of the hottest music stars in India right now. The rapidly rising star’s newly-released song Saara India presents an eye-catching music video featuring television heartthrob Priyank Sharma.

How do you look back on your musical journey?
My musical journey has been full of surprises for me because I never thought I would do what I’m doing right now. I knew there would be a lot of struggle, but then I realised struggle was everywhere. So I just took a leap of faith.

You have delivered a number of chartbusters; which has been your favourite?
I think my personal favourite would be Buzz because it was my debut and that voice was so new. Whenever I hear the song, I’m like ‘wow’.

Can you tell if a song will be a hit when you are in the studio?
Yes, I can. But I’m not as good as Badshah, because he just knows if it’s a hit from the first play. But I take time and soak the song in first before giving my judgement.

Do you prefer party tracks, and how do you approach them?
There’s no such preference. Be it party tracks, sad or love songs, I just do what sounds good to me and that is it. If I like the song, I just do it.

You have done some of your best work with Badshah; what is he like to work with?
We are family. I don’t work with him, we just have fun together and gaane ban jaate hai (songs are just made) and we get hits. He’s my brother from another mother.

Tell us about your latest single Saara India?
I’m really looking forward to Saara India because this time, there’s no Badshah behind the song. Now it has become a challenge for me to bring out Aastha Gill in front of everyone and show them what I’m capable of. I’m really looking forward to it. This song is one that I really liked in the first go and was so confident about it, and I hope people will like it. I know people will get hooked onto it.

What was the biggest challenge of putting the song together?
It was my Punjabi accent. I know Punjabi, but I’m not fluent in the language. I used to sing with a Delhi accent. Then the music director and lyricist, when I sat with them, taught me the right pronunciation of the words. It’s a Punjabi song. The other Punjabi track that I have done was Heartless. So this is like hardcore Punjabi and my biggest challenges were to be fluent in the language and improve my accent.

Does your approach change between a film song and a single?
No, it doesn’t change. A song is a song. I sing it with my heart and soul, and I try to do justice to what the song means.

Tell us about the music video for Saara India?
The music video was so much fun and it was long because, obviously, we had to travel and keep everyone’s availability in mind. It was not at all like a shoot, it was like a road trip. We had a great time.

Your songs have been very popular and clocked up huge numbers; does that put pressure on you ahead of a release?
Of course, it puts a lot of pressure on me. Every time I deliver a song, thanks to god and my people out there who are giving so much love to my music, it does well. Then the next song, I know it has to either be on par or better than my previous song. I really scrutinise my work myself before bringing it out because I want to take it a step up. I don’t want to disappoint anyone.

What is the musical master plan going forward?
It is, I think, (finding great) lyrics. People really want to connect with the song and if you talk their language they will instantly get hooked onto it. So we look for words, we look for the genuine desi lingo that people are actually using day to day and we focus on that. And, obviously, should have the best beats – if you hear the song, it moves you whether it is a soft or party track.

You have done some great collaborations; but is there someone you want to work with?
I really want to work with a female artist. I have spoken to quite a lot of female artists in the industry and we are actually planning to do to something. But I’m really looking forward to a female collaboration now because no one in India has ever done it and I think it’s a great idea.

What music dominates your playlist?
Hip-hop. I’m also listening to a lot of Billie Eilish these days to relax to.

What would be your karaoke song of choice?
It would be Someone Like You, because I used to sing it when I went to karaoke nights in Delhi. Also, Hotel California is a song that I really like, which everyone sings. Another song of my choice would be Diamonds by Rihanna.

If you could ask any artist alive or dead a question, who would it be and what would you ask him or her?
I want to ask Beyonce a question, ‘how does she perform so brilliantly, gracefully and effortlessly in those heels?’ I could never do that.

What are your passions away from music?
There are many. I draw and paint. Cooking is a newfound passion in my life. Chit chatting is another; I love making friends and socialising. Dancing, which is obvious, and playing the piano.

What inspires you?
My biggest inspiration is Badshah because I work with him and see how inspiring he is. Half the people look at him as a fun-loving character. But I know who he is. He has worked so hard for what he is today. Everything he does is an inspiration for me. He used to drop me home in an auto rickshaw and now he owns a Rolls Royce. Every day he’s doing something big and he makes every moment count.

Finally, why do you love music?
There is nothing more relaxing than music. Music is the best medium of expression. Music is life.