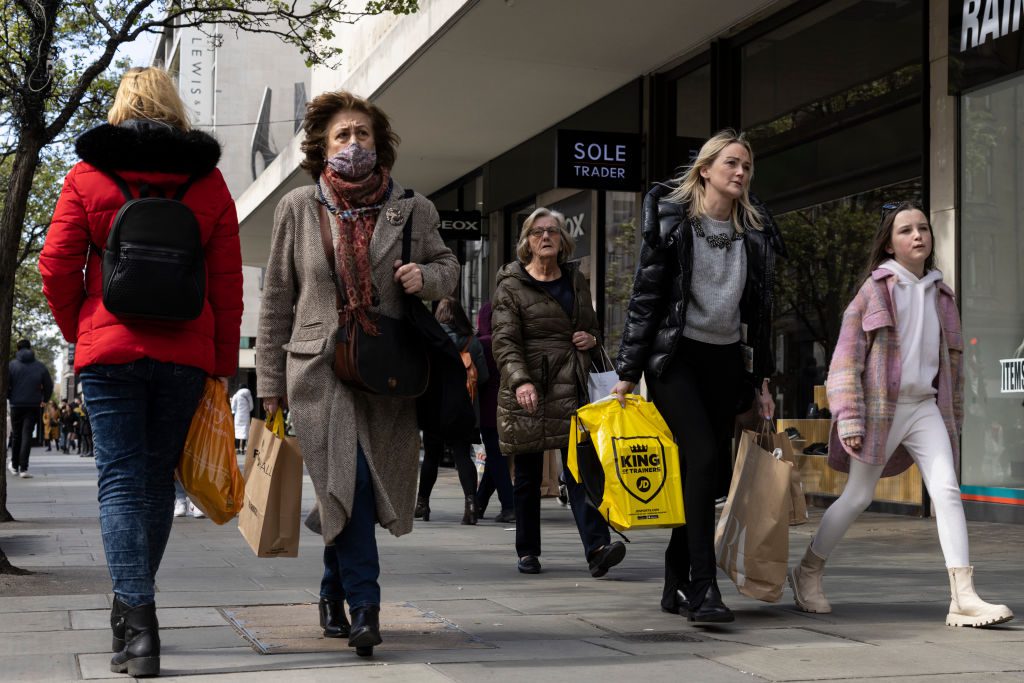 BRITAIN has shown an uptick in month-on-month footfall as the weather improved, although the number of store visitors remains way below the pre-pandemic levels three years ago.

According to BRC-Sensormatic IQ data, the total UK footfall decreased 13.1 per cent in April year-on-three-years (Yo3Y), but there was a 2.3 percentage point improvement from March. This was also better than the three-month average decline of 15.1 per cent.

The UK fared better than many other G7 countries in terms of shoppers visiting stores – France recorded a Yo3Y decline of 23.4 per cent in April, Germany 27.6 per cent and Italy per cent.

However, the figures compare only the number of shoppers visiting stores and it does not necessarily mean the footfall led to actual shopping, considering the cost of living crisis.

Footfall on British high streets declined 17.2 per cent in April (Yo3Y), but it was 0.6 percentage points better than the previous month’s rate and an improvement on the three-month average decline of 18.4 per cent.

Retail parks saw footfall decrease by four per cent (Yo3Y) and a 3.3 percentage point rise over March and an improvement on the three-month average decline of 7.2 per cent.

Comparatively, shopping centre footfall saw a sharper decline of 27.6 per cent Yo3Y, but it was 8.2 percentage points better than last month’s rate. There was an improvement on the three-month average decline of 34.5 per cent.

“April saw another encouraging improvement to UK footfall, as the spring sunshine and Easter festivities brought consumers back to stores. After a slow start for footfall in April, as the weather improved, customers were more inclined to visit their favourite shopping destinations. Retail parks and shopping centres experienced the biggest improvement to footfall, as the public visited locations with the largest mix of shops to scope out the best deals”.

While footfall continues to make its return towards pre-pandemic levels, consumer confidence saw a different trend, falling to its lowest levels since the 2008 financial crisis, Dickinson said.

“Shoppers are now being forced to make tough decisions in the face of rising inflation and higher energy prices, exacerbated further by the war in Ukraine. This threatens to stall improvements to footfall, as consumers reign in their discretionary spending. Retailers will have to work twice as hard to sustain customer loyalty and engagement.”

Andy Sumpter, retail consultant (Europe, the Middle East and Africa) for Sensormatic Solutions said the UK led the way across the G7 nations in terms of returning in-store shopper traffic.

“At face value, this is all positive and welcome news for retailers as the UK footfall recovery continues. However, it comes with a caveat that this only captures store visits, rather than reflecting what’s being rung through the tills. As UK shoppers feel the pinch of the rising cost of living and face downward pressures on their disposable incomes, conversions and basket sizes risk being reduced, so retailers – especially non-discounters or value brands – will need to work even harder to earn a share of wallet and shopper loyalty in-store.”