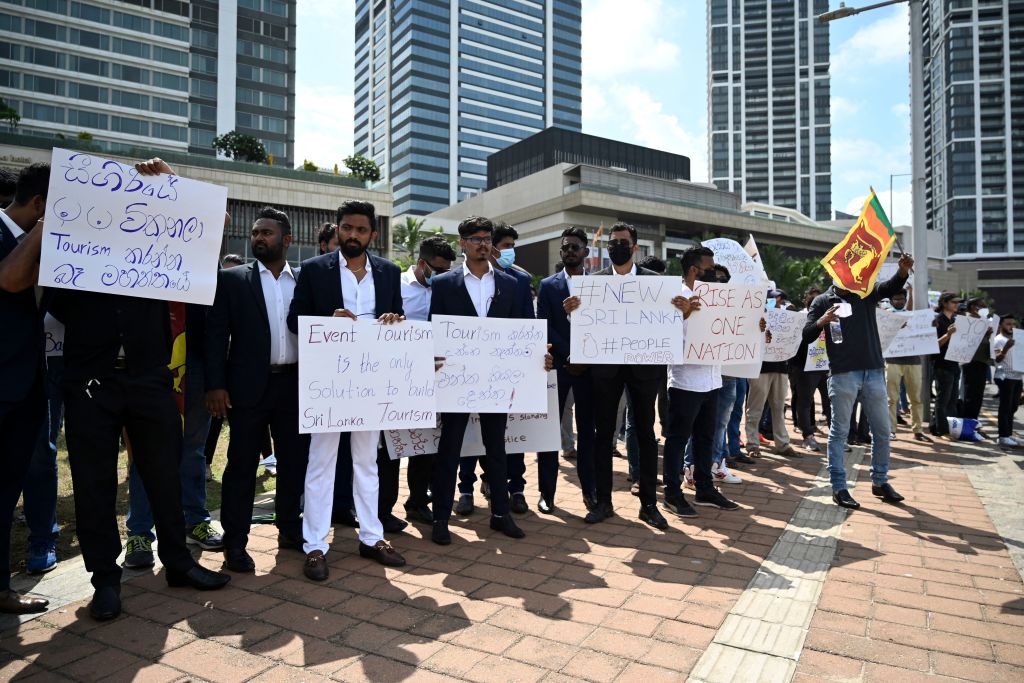 Severe shortages of food and fuel, alongside lengthy electricity blackouts, have led to weeks of widespread anti-government demonstrations – with calls for President Gotabaya Rajapaksa to resign.

The latest protests saw students try to march on Friday to the national parliament, and police used water cannons in efforts to disburse the angry crowds.

Monks, who had largely rallied the Sinhala-Buddhist majority to elect Rajapaksa at the November 2019 polls, were also seen joining demonstrations in the capital Colombo, where some defiantly stood opposite police wearing gas masks and holding riot shields.

The Central Bank of Sri Lanka said its benchmark lending rate had been raised to 14.5 per cent to “stabilise the exchange rate” after the rupee tumbled over 35 per cent in a month.

The rate for deposits was also increased by seven percentage points to 13.5 per cent as reports said Sri Lanka’s rupee was the worst-performing currency in the world, edging out the Russian ruble.

“We are now in damage control mode,” Weerasinghe said at his first press conference since replacing Ajith Cabraal, who was virtually forced out with the country facing bankruptcy.

“We would not have had to make such a sharp increase if rates had been raised incrementally over a period of time,” Weerasinghe said, vowing to relax exchange controls introduced by his predecessor.

The bank said the shock-treatment rate hike was due to its belief that the embattled island’s inflation, already at record levels, could get worse.

The Colombo Consumer Price Index rose 18.7 per cent in March while food inflation topped 25 per cent, but private analysts placed inflation at over 50 percent in the month.

Colombo-based diplomats from European Union member states, which form a key export market for Sri Lanka, on Friday asked the government to immediately begin reforms to revive the economy.

“We stress the extreme urgency of the situation, which requires the authorities to start in-depth discussions with the International Monetary Fund,” the diplomats said in a joint statement.

Opposition parties have rejected a presidential overture to form a unity administration and instead joined calls for Rajapaksa to step down.

The shortages of essentials have been caused by a wide-ranging import ban as Sri Lanka seeks to conserve its meagre foreign currency reserves to pay its debts.

In recent years the vital tourism sector has also been hit hard by Islamist bomb attacks in 2019 and the coronavirus pandemic, which dried up remittances from Sri Lankans abroad.

Economists say the crisis has been exacerbated by government mismanagement, years of accumulated borrowing and ill-advised tax cuts.