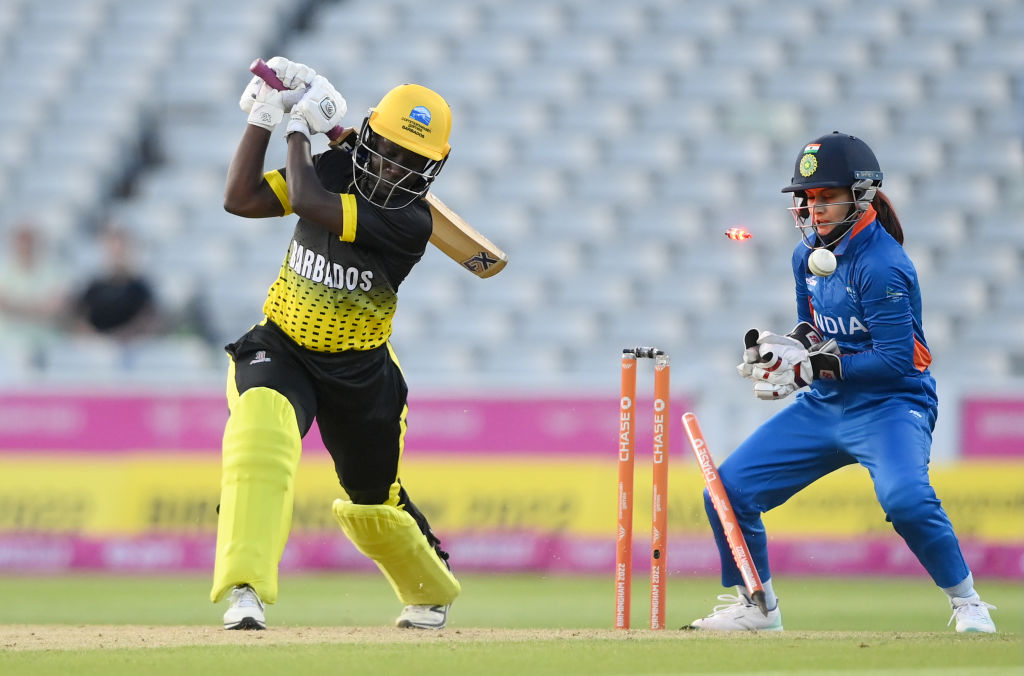 BIRMINGHAM, ENGLAND – AUGUST 03: Kyshona Knight of Team Barbados is bowled by Sneh Rana (Not pictured) of Team India during the Cricket T20 Group A match between Team India and Team Barbados on day six of the Birmingham 2022 Commonwealth Games at Edgbaston on August 03, 2022 in Birmingham, England. (Photo by Alex Davidson/Getty Images)

The International Cricket Council (ICC) will make a presentation to the Los Angeles Olympics organisers later this month in its bid for the sport to return to the Games after a gap of 128 years, sources told Reuters.

Cricket has been shortlisted for potential inclusion at the 2028 Los Angeles Games along with baseball-softball, flag football, lacrosse, breakdancing, karate, kickboxing, squash and motorsport.

Teams would play Twenty20 cricket — the sport’s shortest international format which has inspired the lucrative Indian Premier League and similar franchise-based competitions in other countries.

The host city can include any sport but needs the approval of the International Olympic Committee (IOC).

The governing body is likely to take a final decision at the IOC session in Mumbai next year, said one of the sources who had direct knowledge of the matter.

Cricket has not been played at the Olympics since its maiden appearance in the 1900 Games at Paris, where Britain beat a team of mostly English expatriates representing France by 158 runs to win gold.

Despite initial obstruction from the powerful English and Indian cricket boards, the game has started to gain entry to multi-sports gatherings around the world.

Women’s Twenty20 is being played at the ongoing Commonwealth Games in Birmingham and cricket will also be part of the delayed Asian Games in Hangzhou next year.

It will also feature in the Africa Games in Ghana and the Southeast Asian Games in Cambodia next year.

Considering cricket’s low profile in the United States, many believe it has better chances of making the cut for the 2032 Olympics in Australia.

The ICC, however, is determined to grow the game in the United States – which is cricket’s third largest broadcast market after India and Britain due to the Indian and Pakistani diaspora. It believes the 2028 Olympics would make the perfect showcase.

Olympic sports remain in cricket’s shadow in the sub-continent, so the ICC has based its bid around cricket’s unrivalled popularity among the region’s billion-plus fans.

Women’s Twenty20 has already proven a big hit on its Commonwealth Games debut with record 150,000-plus tickets sold.

“Being in multi-sport games, whether it is the Commonwealth Games or the Asian Games or the African Games, putting cricket into these multi-sport events is good for the growth of our game,” ICC chief executive Geoff Allardice told reporters last week.