Sri Lankan prime minister Ranil Wickremesinghe has said that the creation of Ladakh as a Union Territory is an internal matter of India.

The Indian government on Monday (5) revoked Article 370 which gave special status to Jammu and Kashmir and moved a separate bill to split the state into two union territories of Jammu, Kashmir and Ladakh.

The move sparked jubilation in Buddhist-dominated Leh town for coming close to the fulfilment of their long-standing demand.

The creation of Ladakh and the consequential restructuring are India’s internal matters, Wickremesinghe said in a communique posted on social media sites.

“I understand Ladakh will finally become an Indian state. Buddhists are 70 per cent of Ladakh’s population and it will be the first Indian state with Buddhist majority, he said.

The prime minister said that he has been to Ladakh and “it is really worth a visit, he added.

Sri Lanka is a Buddhist majority country with 74 per cent of its citizens following the religion. 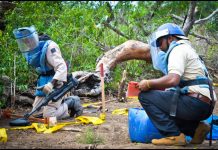