Varun Dhawan and Sara Ali Khan will be seen together on the big screen for the first time in David Dhawan’s Coolie No. 1. The film is a remake of 1995 release Coolie No. 1 which starred Govinda and Karisma Kapoor in the lead roles. Yesterday, the makers had released the teaser poster of the film, and today the main posters of the film have been unveiled.

Varun Dhawan took to Twitter to share a motion poster and the posters of the film. He tweeted, “COOLIE NO 1 . Baaajooooo 🔊#vdascoolie #CoolieNo1”

Today, it is also Sara Ali Khan’s birthday, so of course, a poster featuring her too as been released. She took to Instagram to share the poster with her fans. She posted, “Happy Birthday to me 🎂 🎂 🎂 Ji haan aaj hamara birthday aaya 🎁 🥳🎈 Ji haan maine apna poster laya 🎬 🍿 🎥 Birthday ke din apna vada nibhaya 👏🏻🙏🏻👌🏻 Inshallah sabke dil ko yeh bhaya 💥🔥💫 #sarakishayari will always be best‼️.”

Well, the posters are surely quite glamorous and Varun and Sara are looking damn good together. By the way, we wonder if Sara plays the role of a poetess in the film as yesterday when she posted the teaser poster, the actress had written, “Paranthe ke saath moo-lie 🍠 Entertainment mein ghuse ful-lie 🎥 Kal mein nahi bhool-lie 🤫🤭 Laane aapkeliye the first look for coolie 💼 🙌🏻👏🏻 #sarakishayari (The humour in our film is better than mine, I promise 👌🏻🤘🏻🤣👀).”

While the posters have impressed us, it will be interesting to see how the film turns out to be. Varun Dhawan and  David Dhawan had collaborated in 2017 for Judwaa 2 which was a remake of David Dhawan’s 1997 release Judwaa. Though Judwaa 2 did very well at the box office, the movie had received mostly negative reviews.

Coming to Coolie No. 1 remake, the film will be hitting the screens on 1st May 2020. The shooting of the movie kickstarted in Bangkok earlier this week. 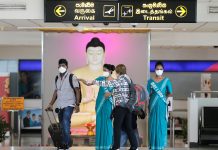