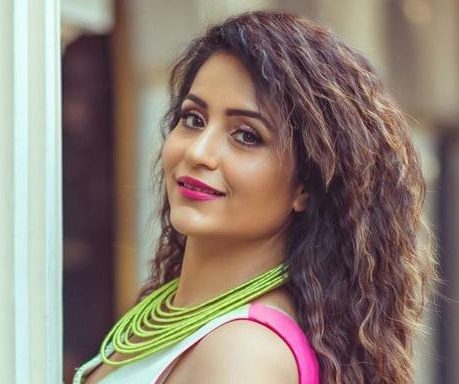 AN UNEXPECTED career change saw Charrul Malik go from being a successful news anchor and TV host to becoming an acclaimed actress.

It became even more interesting when she signed up to star in hugely popular television sitcoms Bhabi Ji Ghar Par Hai! and Happu Ki Ultan Paltan simultaneously. She is enjoying playing different characters in the two serials at once and looking forward to taking on more challenges.

Why did you switch from a successful hosting career to acting?
I believe in experimenting. I’m a law graduate who got into mainstream news without any course in mass communication or journalism. I got a break because of my speaking skills. Anchoring was like portraying over 500 characters, as no two shows were the same. So, while doing it I realised I can get into acting and have a passion for it. It’s not like I have left hosting or anchoring. I want to pursue it but within the entertainment industry.

What is your fondest memory from your TV host and news presenter days?
It was interviewing Deepika Padukone and Neil Nitin Mukesh for Star News. My name got registered in the LIMCA Book Of Records because I’m the only anchor globally to have conducted a live interview for an hour while wearing skates. My boss told me, Deepika will come to the studio and skate because she is playing an instructor in her movie Lafangey Parindey, which was ready for release, and we want you to accompany her.

Did you agree straight away?
As I always tell people, I don’t say ‘no’ to anything and anyone, so agreed. I did not professionally learn skating but during childhood, my twin sister, Parull and I skated indoors. (Laughs) So that experience helped, and things went smoothly. I won’t deny being nervous, but within 30 seconds all my fear disappeared.

Which of your acting roles have given you the greatest joy?
My character Russa in Bhabi Ji Ghar Par Hai! is doing great and has given me the greatest joy. Russa is more like Charrul, so I’m playing myself and it’s really fun.

Why do you think Bhabi Ji Ghar Par Hai and Happu Ki Ultan Paltan are so successful?
The simple concepts have nice, clean comedy that people connect with. Also, these shows are experimental, innovative, and not repetitive. When I watch some shows, there are lengthy scenes that stretch the same concept. But in comedy, that doesn’t work. Everything in these shows is entertaining and full of happiness. If people haven’t watched the previous episodes, then they don’t miss anything. There’s no major connectivity between episodes. You just enjoy healthy laughter while watching these shows. The writers of these shows, director, and producers Binaiferr Kohli and Sanjay Kohli, together make an amazing team. The work atmosphere is friendly and the chemistry between characters is beautifully sketched.

Is comedy a genre you are most comfortable in?
Yes, because I have been doing this for a very long time. And talking about my personal life, I enjoy laughter and don’t like serious conversations that bring tension. I want to be happy in my personal life. I keep on cracking jokes, and making people around me laugh.

Does reality TV interest you?
Nowadays, reality shows are doing well, and the concepts are interesting. So, why not? If I get a chance to participate, I would love to. Reality shows are realistic, be it dance shows, a stunt-based one like Khatron Ke Khiladi or others. We all might not have the potential to be the best singer or dancer but there is no harm in learning or participating.

Do you have a dream role?
I really want to do a meaningful role. I also like doing stunts. I feel that someday I should do a role where there are a lot of stunts included. I would also love to do an army-based show. It has been my dream since childhood that I want to get into the navy or army and do something different because I am very disciplined and punctual.

What do you enjoy watching as an audience?
To be honest, I can’t watch emotional crying shows. I like watching comedy. Of course, my shows Bhabi Ji Ghar Par Hai! and Happu Ki Ultan Paltan are the best comedies. Other than them, I also like watching National Geographic because it helps me gain knowledge. I also enjoy cooking shows as I’m not fond of cooking.

What is the best advice you have ever got?
My director has once told me, “Charrul, stay as you are. Learn, but don’t change yourself. Evolve, strive to be better, but don’t change your basic nature, because everyone has a different energy level, and positivity, so stay the way you are’. I keep this in my heart and treat everyone equally. I believe in being normal, original, and nice to people around me.

What inspires you?
Every person who works hard in life in whatever profession, inspires me. For me, every person is a role model in some way. I’m happy working every day without complaining and want to spread positivity. I learn from animals too. Look at how much my dog Della loves me, so selflessly and warmly. So, everything that teaches me, be it people, animals, or birds, I am ready to learn. In terms of people, Smriti Irani inspired me with her journey. My producer Binaiferr Kohli inspires me. She is always multi-tasking, works hard and is fun to be with, but also a professional, taking care of everybody. It depends on you, what things you want to absorb from the people around you and get inspired from it.