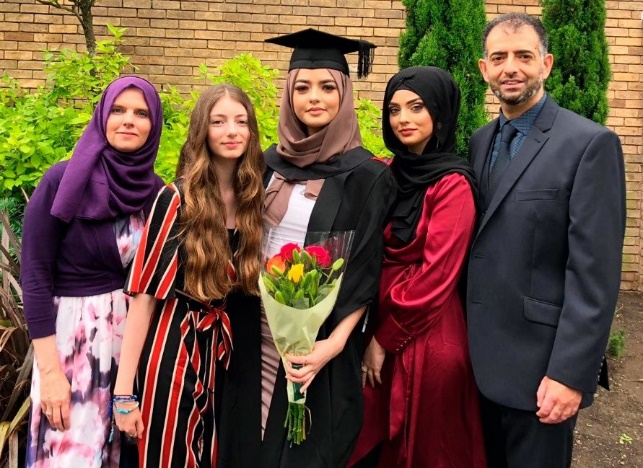 Donations of nearly £100,000 will help find a cure for brain tumours in memory of a 23-year-old woman who died less than two years after being diagnosed with a highly aggressive form of the disease.

Amani Liaquat, from Luton in Bedfordshire, was diagnosed with glioblastoma (GBM) on her 22nd birthday in April 2020.

She died in February this year, six weeks before Tom Parker, lead singer of band The Wanted, with whom she formed a close friendship because of their shared diagnosis.

The Masters student and first-class honours law graduate received her terminal brain tumour  diagnosis – which has an average survival prognosis of just 12 to 18 months – after collapsing at home.

After standard of care failed to stop the growth of her tumour, Amani’s family decided to source life-prolonging treatment from Germany for which they, with the help of relatives, friends and strangers, raised more than £100,000 in 24 hours.

Sadly, Amani’s condition deteriorated markedly after being told at the end of last year that she had exhausted all of her treatment options.

After her death, Tom Parker posted a tribute on his official Instagram page, saying: “In the early hours of this morning Amani sadly passed away. My thoughts and love are with her family. She was an incredible young lady. Bright, smart, funny and I had the greatest pleasure to have met her.”

During her courageous 22-month battle with the disease, Amani became a passionate supporter of Brain Tumour Research and was an integral part of the charity’s #BrainTumourPetition and Stop the Devastation campaigns.

She also undertook numerous fundraising and campaigning activities for the charity, including setting up the Fight4Hope fundraising group and organising Luton’s first ever Walk of Hope. Her efforts, and that of friends and family she inspired to fundraise, have raised more than £54,000.

Amani’s parents, Yasmin Stannard and Khuram Liaquat, have also generously gifted £40,000 to Brain Tumour Research from the remaining crowdfunding donations not used for her treatment in the hope of helping others.

Later this year, they will be joined by Amani’s sisters Ruqayyah and Maleehah and other family members on a visit to the Brain Tumour Research Centre of Excellence at Queen Mary University of London where the near £100,000 they have donated will fund vital work to help find a cure for brain tumours.

They will have the opportunity to tour the labs led by principal investigator Professor Silvia Marino and speak to scientists about their work to find a cure for brain tumours, before laying 33 tiles on the Wall of Hope, each of which represents the £2,740 it costs to fund a day of research at the centre.

Yasmin said: “Amani loved being involved in campaigning and raising awareness about the lack of research into brain cancer research. It brought purpose and focus to her darkest days and gave her something to focus on outside of herself and her own problems. Many times she could be heard saying ‘it might be too late for me but I want to make a change for others’.

“We were overwhelmed to receive so many crowdfunding donations and will always be grateful for everyone’s kindness and generosity in helping us access treatment for Amani abroad. We hope that by gifting what is left to Brain Tumour Research will ensure others facing the same diagnosis will have a different outcome in the future.”

Khuram added: “We hope the money we’ve donated will help find a cure for this devastating disease. Amani was my hero and the most amazing ambassador for Brain Tumour Research and for that to be her legacy would have made her so incredibly proud.”

GBM Awareness Week takes place in the UK from today (Monday 18 July). According to Brain Tumour Research, GBM is the most commonly diagnosed high-grade brain tumour in adults. It is fast-growing and the average survival time is just 12 to 18 months. Treatment options are extremely limited and there is no cure.

Charlie Allsebrook, community development manager for Brain Tumour Research, said: “Amani’s death is a tragedy but the fact she did so much in her short life and had such a profound impact on the brain tumour community and beyond is a legacy she and her family can be immensely proud of.

“Amani won’t be forgotten and her legacy will live on in the Fight4Hope fundraising group she helped set up and in the many research days, she has helped fund. We’re indebted to her and her family for their incredible support and incredibly grateful to all who knew and loved Amani for their help in raising funds for our charity.

“Amani’s story is a stark reminder that Brain tumours kill more children and adults under the age of 40 than any other cancer yet, historically, just 1% of the national spend on cancer research has been allocated to this devastating disease. Brain Tumour Research is determined to change this but it is only by working together that we will find a cure.”

Brain Tumour Research funds sustainable research at dedicated centres in the UK. It also campaigns for the Government and the larger cancer charities to invest more in research into brain tumours in order to speed up new treatments for patients and, ultimately, to find a cure. The charity is the driving force behind the call for a national annual spend of £35 million in order to improve survival rates and patient outcomes in line with other cancers such as breast cancer and leukaemia and is also campaigning for greater repurposing of drugs.